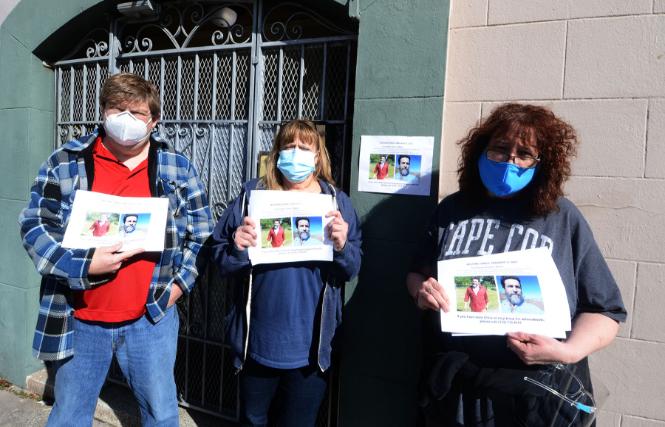 Emeryville Police have talked to a person who claims to have knowledge of the whereabouts of a gay San Francisco man who disappeared early this year, according to a family member, as San Francisco Police seek the public's help in finding him.

The mother of Christopher J. Woitel, 50, last heard from the Guerrero Street resident January 9, according to a February 10 SFPD news release.

Woitel's brother Michael Woitel, 45, is one of six siblings and lives in Illinois. He told the Bay Area Reporter February 12 that the Emeryville Police Department is in touch with a homeless man in the East Bay city who claimed to know that Woitel had been murdered.

"We believe with a high level of confidence that the individual — at the very least — has information, and we know the Emeryville Police Department conducted an interview," he said.

The Emeryville Police Department has not responded to a request for comment.

His investigation led "to the profession of a homeless man living in a tent encampment in Emeryville who said Woitel was murdered, [and] his body deposited in the Bay at the end of Mariposa Street," a news release from Mark Guarino, who is in charge of media relations for the Woitel family, states.

Michael Woitel said he is confident things are moving in the right direction now that the Emeryville Police have conversed with the homeless man.

San Francisco Police Department Public Information Officer Robert Rueca told the B.A.R. February 12 that he could not confirm on behalf of the Emeryville Police if that department had made contact with the homeless man.

"Emeryville PD, if they're involved, then they'll be able to make a statement," Rueca said. 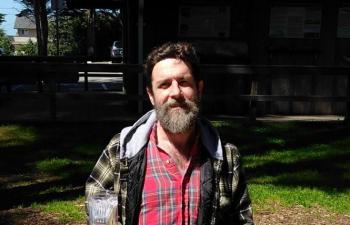 'We suspected something was not right'
Having lived in San Francisco since his 1988 graduation from high school in Oak Park, Illinois, just outside Chicago, Woitel is known to frequent Emeryville and Sonora in Tuolumne County, according to a February 10 SFPD statement, which added that he is a white male, 5 foot, 10 inches tall, 200 pounds and with brown hair and brown eyes.

Guarino disclosed Woitel's sexual orientation to the Bay Area Reporter February 11 — and that two of his sisters and a brother are in the Bay Area this week. They plan to hand out fliers outside Woitel's apartment at Market and Guerrero streets Friday, February 12, at 1 p.m.

"We suspected something was not right on January 8, January 9," Michael Woitel told the B.A.R. February 12. "Within a 24-hour period he'd reached out to his sister and niece looking for money, and trying to get a new phone from his sister and friends. January 9 is the last known communication. Shortly thereafter, we filed a missing person case."

Michael Woitel said that the purpose of the family visit is to spread missing person fliers around his brother's residence and to go to places he frequented to look for him.

"Right now Chris could still be out there, but we don't know where" Michael Woitel said. "They're passing out fliers so people know what he looks like. [They're] going to places he has frequented; businesses around may have video cameras."

Woitel's family has been seeking police assistance for several weeks and has asked the department to open an investigation. SFPD released its news release only days before Woitel's family arrived in the Bay Area; Michael Woitel said this may be coincidental.

Michael Woitel said he understands that the San Francisco Police Department "are under a lot of workload with limited resources," but is hopeful that this week that officers are doing what they need to.

"This week they're actually doing the things we think will help with this," he said. "They have their procedural methods, but getting the word out there is helping."

When asked February 11 if the SFPD had been inside Woitel's apartment, Rueca told the B.A.R. that "with the assistance of a responsible party officers made entry into Mr. Woitel's residence, but were unable to locate him there."

When asked why a news release was only issued February 10, Rueca said that it was not related to family members visiting the city.

"We can't speak to the exact investigative steps (since January 9) but coincidental? I don't know if there was anything coincidental in that. We were requested to put out a news release for public assistance. We had no information as to whether the family was in town," he said.

Woitel's mother is quoted in Williams' report as stating that the credit card and bank accounts of Woitel are untouched. The report also states that security camera footage at his apartment last shows Woitel on January 8 at 8:38 p.m.

Anyone who sees Woitel should contact the SFPD through the department's tip line at 415-575-4444, or through text to "TIP411", beginning the message with "SFPD."

Updated, 2/12/21: This article has been updated to include comments from SFPD.