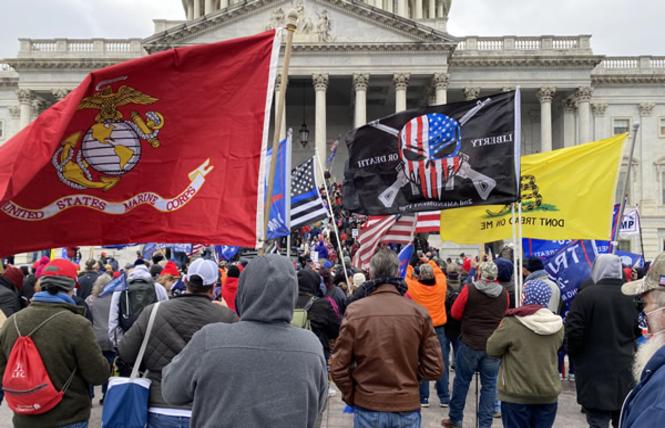 Thousands of President Donald Trump's supporters stormed the U.S. Capitol on Wednesday as lawmakers were beginning to certify the Electoral College results.

The siege began shortly after Trump spoke to his supporters who gathered on the Ellipse for the "Save America Rally." Participants then marched to the Capitol.

The Washington Post reported the U.S. Capitol Police locked down the Capitol and evacuated lawmakers after Trump supporters breached it. Other media reports indicate at least one person was shot during the siege.

The Washington Blade was on the east side of the Capitol when police used tear gas in an attempt to stop the protesters from entering the building. This reporter saw at least three people with pro-Trump signs standing in the window.

Mayor Muriel Bowser and House Speaker Nancy Pelosi (D-San Francisco) have requested the National Guard to help clear the Capitol. The Metropolitan Police Department, the Montgomery County Police Department and the U.S. Secret Service are among the other law enforcement agencies that responded to the scene.

The siege began shortly after lawmakers began to certify the Electoral College results that confirmed President-elect Joe Biden had defeated Trump, despite unfounded claims the presidential election results were rigged. Dozens of Republican lawmakers previously announced they would object to the count.

Democrats on Wednesday also regained control of the U.S. Senate with the victories of the Reverend Raphael Warnock and Jon Ossoff in Georgia, who each won their runoff races.

"The violence and destruction taking place at the U.S. Capitol must stop and it must stop now," tweeted Vice President Mike Pence, who was in the Capitol when the siege began. "Anyone involved must respect law enforcement officers and immediately leave the building."

"Peaceful protest is the right of every American but this attack on our Capitol will not be tolerated and those involved and will be prosecuted to the fullest extent of the law," he added.

Trump in a video he released on Twitter falsely asserted the election "was stolen from us."

"America is so much better than what we're seeing today," tweeted Biden.

Maryland Governor Larry Hogan, a Republican, is among those who condemned the siege.

"All Americans should be outraged by this attack on our Capitol," said Hogan. "This is a heinous and violent assault on the heart of our democracy. I will not stand for this, and neither should any American."

Senator Chris Van Hollen (D-Maryland) in a tweet said, "I cry for our country."

"Hard to take seriously the political arsonists, starting with Trump, when they say they want to put out the flames after they lit the match," he tweeted. "I never thought we would live to see the day that violent mobs seized control of the Capitol."

"What's happening in our nation's Capitol is nothing short of terrifying, and is unlike anything I've ever seen in this country," he stated. "President Trump and his Republican sycophant enablers are responsible for this armed mob storming the Capitol. They're responsible for the shutting down of our democratic process and for putting members of Congress, their staff, journalists and other Capitol employees in physical danger. The people who enabled this mob violence must be held accountable and recognized as perpetrators.

"As a senator, I've experienced the legislative process being disrupted by violence. I've been sequestered by Capitol security due to violence. This cannot continue, and we must have accountability," he added.