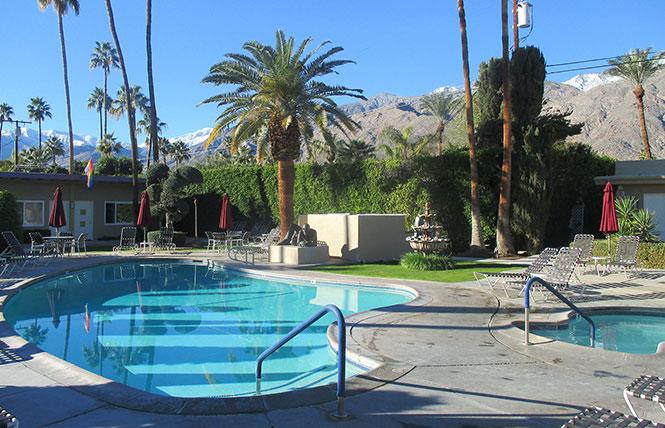 The INNdulge gay resort in Palm Springs has been put on the market. Photo: Ed Walsh

One of Palm Springs' best-known gay resorts is up for sale. INNdulge's owners Jon Jackson and his partner, Sandy Miller, are selling the hotel in the Warm Sands neighborhood for $10.8 million.

Longtime fans of the resort will be happy to know that the couple has stipulated that whoever buys it keeps the property as a gay resort.

Three of the formerly gay resorts in Warm Sands have converted to mainstream in recent years. In 2019, All Worlds Resort's main complex became a heterosexual swingers resort although it still operates a gay resort in the expansive annex property across the street, which used to be the Inn Exile resort.

"We never thought about owning a hotel until we learned the iconic INNdulge resort in Palm Springs was for sale," Jackson explained about his purchase of the 1958 mid-century modern property.

The couple were recently advised to sell because of a change in the market causing commercial investors to focus away from buying retail or office space and look toward lodging as a safer bet.

"If it wasn't for a call from our broker, we would never have considered leaving so soon," Jackson said. "(The broker) said that if we were thinking of selling INNdulge in the next five years, we should do it now."

Jackson and Miller are known for maintaining the property to very high standards over the past decade. They explained that attention to quality went into their reasoning for making sure the buyer will keep it as a gay resort.

"We've spent the last 10 years improving the property into a luxury gay resort," Jackson said. "We wouldn't want someone coming in and destroying the concept. We've built a strong clientele who have come to rely on Palm Springs and INNdulge as their yearly vacation destination. We care too much for them to let a new buyer take away the magical place they all know and love."

When the couple bought the property from the beloved former owners John Williams and Jean-Guy Lachance, regulars feared that the property wouldn't be kept up as well. But Jackson and Miller quickly put those worries to rest. They remodeled the interior of the rooms, enlarging the bathrooms without changing any of the mid-century modern architecture of the complex. The couple spared no expense. They hired a crane to lift two large modern figure sculptures by artist Mavis McClure to be placed on opposite sides of the resort's kidney-shaped pool.

Jackson told the Bay Area Reporter that he expects the hotel business to bounce back quickly after the pandemic.

"I think it will surprise people just how fast travel comes back," he said. "The pent-up demand is off the hook right now. We are expecting our best fall ever, and if things fall right, a great summer as well. Spring will again be a challenge, but it's nice to see light at the end of the tunnel."

Palm Springs Bureau of Tourism public relations manager Randy Garner told the B.A.R. that all the city's gay bars have survived the pandemic and he has not heard of any of the city's gay resorts that have had to permanently close. Most of the Palm Springs' gay bars are downtown on the block of E. Arenas just east of Indian Canyon Drive. The bars and restaurants there expanded with outdoor seating but that stopped with Southern California's stay-at-home order. As it applies to rentals, the Southern California order is scheduled to expire December 28, though it likely will be extended.