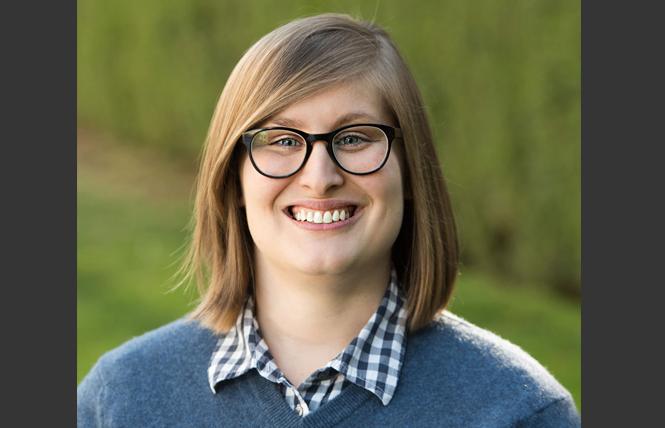 Health care settings that are not affirming of LGBTQ patients continue to be a considerable problem in California. And LGBTQ people in need of medical attention often must drive lengthy distances to access services.

Those are two of the key findings in a landmark online survey launched last year aimed at learning more information about LGBTQ Californians' experiences accessing mental health services, if they have thought about suicide, and how they have been impacted by anti-LGBTQ bias.

It is believed to be the state's first mental health survey of its LGBTQ citizens, and 2,875 Golden State residents took part in it, just shy of the initial goal of 3,000 respondents. A comprehensive 216-page report about its findings, "Surveying the Road to Equity: The Annual State of LGBTQ Communities, 2019," was released in November.

"We think some of these findings, and some of what we looked at, are really the first of its kind, particularly around looking at time and distance traveled to receive medical care," said Amanda McAllister-Wallner, director of the statewide LGBTQ health network. "I am really hoping this can be used to improve access to LGBTQ-affirming health care and I think we have some good ideas about what can work. We also hope the state funds some innovative ideas as well to really address those needs."

In 2016, the state's Mental Health Services Oversight and Accountability Commission awarded a $1.8 million grant spread over three years toward the LGBTQ mental health project, which officially began in August 2017. The commission's main focus is developing strategies to overcome stigma and it also advises state lawmakers on mental health policy.

As the Bay Area Reporter noted in a story about the survey launch last year, the grant marked the first time the advisory panel had funded an LGBTQ project since voters created it with the passage of Proposition 63, the Mental Health Services Act, in November 2004.

It had been expected that the survey findings would have been released last year in late summer, but the researchers lengthened the amount of time respondents could take part in it. While much of the findings had been tabulated and analyzed months ago, the release of the survey was delayed due to the COVID pandemic.

"We really wanted to make sure we did justice to the findings, so it just took us longer," explained McAllister-Wallner, adding, "you know the way 2020 makes everything slightly more complicated."

Half of the survey respondents were LGBTQ people of color and about one-third had a gender identity different from the one they were assigned at birth. Forty percent were ages 25 to 59, and 50% were 24 years old or younger.

Six percent lived in rural areas of the state. A supermajority of survey participants — 89% — had health insurance but there were wide differences in the type of coverage they had.

"Medi-Cal is an especially important health care safety net for queer and trans people of color in California," noted McAllister-Wallner, who was appointed to California's COVID-19 Community Vaccine Advisory Committee.

Expanding the program so it covers all income-eligible Californians is one solution LGBTQ health advocates are supporting, while another is providing greater assistance for people to be able to afford health insurance through Covered California.

"We know cost is still a major barrier for many Californians in accessing health care in California," McAllister-Wallner said.

Employment assistance programs are also key, as most people continue to receive health insurance via their workplace. The better the job LGBTQ people can land, the better their health care will be.

Issues uncovered
Even though most LGBTQ people have health insurance, the survey found that many don't access health care due to experiencing stigma and discrimination from medical professionals. Thus, one of the recommendations in the report calls for better, mandatory training of doctors and other providers on LGBTQ issues.

"Our research shows it is needed," said Poshi Walker, a project co-director with the mental health advocacy group CalVoices, during an online presentation held last month to discuss the survey findings. "A number of providers just don't have the education they need, and they aren't going to get it if we continue to make it voluntary."

Another finding from the survey is the lengthy waits LGBTQ people have in accessing health care, particularly mental health providers. Under state regulations, patients should wait no longer than 10 business days to see their primary care providers.

But 35% of survey participants said they waited more than that, and 18% reported waiting more than 15 business days. Fifty percent waited longer than 10 days to see a mental health provider, and a majority said they were unable to access individual therapy in the past year.

"Ten days can be far too long to wait for mental health services," noted Walker.

Other issues noted by survey respondents included being unable to afford mental health services, unsure of how to find an LGBTQ-competent provider, and unaware if their health insurance covered such services, even though California requires insurers to do so.

"There is not a lot of teeth to making sure insurance companies are actually delivering on the promise of mental health parity," said McAllister-Wallner. "We need to educate the public about these programs."

The state also has regulations requiring patients to have access to a primary care provider or hospital within 15 miles or 30 minutes from where they live or work. But 44% of survey participants said they had to travel more than half an hour to see their primary doctor. While some said it only took them a minute over the state regulation, some reported needing to stay overnight in order to see their doctor.

"Our community is not able to see their primary care providers in a timely manner. We know this is an issue," said McAllister-Wallner. "Primary care is where you go for prevention. It is the first line in defense of making sure we are leading healthy lives. The fact it is taking such a long time to see a primary care provider is really concerning."

To reduce wait and travel times, the report calls on state leaders to make sure there are more LGBTQ affirming providers and to increase funding for equity workforce training.

"There is a lot of work to be done to make sure our communities have access to LGBTQ affirming providers in their health network and close to where they live and work," said McAllister-Wallner.

The survey asked specialized questions for transgender people as well as those who are bisexual or pansexual. While often invisible at the policy level and in the media, bisexuals accounted for the largest group in the survey, at 52%, compared to 31% of respondents being gay men and 17% lesbian women. Transgender participants were more likely to be bi than the cisgender respondents.

Bisexuals also experience "elevated risk and disparities" compared to their gay, lesbian and heterosexual counterparts, the survey found. Sixty-seven percent of bisexuals said people had treated their sexual orientation as a "sexual curiosity," while 53% said people have told them they are "simply confused."

"Most bi Californians are experiencing anti-bisexual experiences. These are taking place within their families, friends, school environments, but also in the LGBTQ community," said Tania Israel, Ph.D., a professor at UC Santa Barbara who is director of Project RISE, a research team at the university that develops and studies interventions to support the psychological health of LGBTQ individuals and communities. "It is surprising to some people. They think it would an accepting community, but bi people experience discrimination from both heterosexuals and lesbian and gay people."

Increasing bi visibility and acceptance, as well as providing services tailored specifically for bi people will help reduce the stigma and discrimination they face, notes the report.

The survey results among queer and trans people of color confirmed what has long been known, that they face discrimination within their own ethnic and racial group in addition to the larger LGBTQ community.

"It leads to high negative health outcomes," said Luis Parra, Ph.D., a postdoctoral scholar at the University of South California's Suzanne Dworak-Peck School of Social Work. "Depression, anxiety and suicidal ideation are high in these individuals."