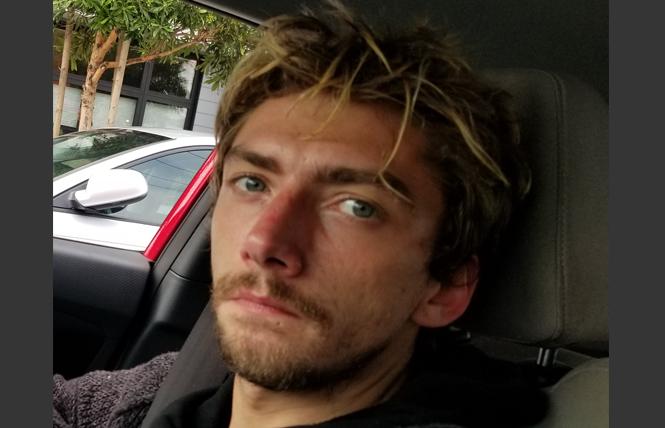 Police are investigating the death of a gay man who was burned alive in the South of Market area early October 25.

Eric Michael Moren, 28, was discovered at 4:18 a.m. by San Francisco police in the area of Minna Street and Russ Alley.

"Officers called for SFFD assistance. The officers determined that a person was on fire and attempted to extinguish the fire. The victim was declared deceased at the scene," Tiffany Hang, a police spokesperson, stated in an email to the Bay Area Reporter, referring to the fire department. "The SFPD Major Crimes Division and the Office of the Chief Medical Examiner are investigating this incident as a suspicious death."

Moren was homeless, his ex-husband Larry Ackerman told the B.A.R. October 28. Ackerman said the two were married in 2014 but Moren "ran off three months after we got married."

Moren is originally from Columbus, Ohio and was very creative, Ackerman said.

Ackerman had periods where he had restraining orders against Moren, and periods when he tried to "help him get mental health" treatment. The night before his death, Moren called Ackerman but Ackerman would not let him stay at his place due to a restraining order. The next day police called Ackerman to tell him about Moren's death. Ackerman said police told him we may never know if it was a suicide or a homicide.

Ackerman is planning on returning to Ohio with Moren's remains and may be having a memorial at Castro and 18th streets.

"I have a whole lot of artwork he created here. He was a very creative person and really liked to dress attractively and impressively — very out-and-about," Ackerman said.

In a Facebook post, friend Gary McCoy said that he "watched [Eric] from being a healthy vibrant intelligent young man trying to start his (many) businesses, to serious mental health challenges, homelessness, and addiction."

"I'm really sorry we, as a community, didn't do more for him," he added.