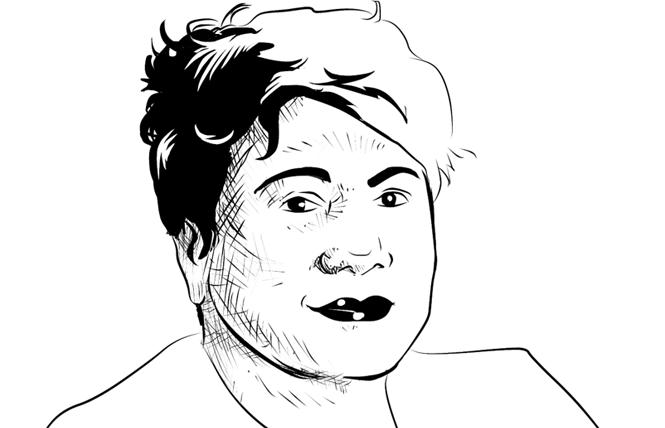 On October 5, Monica Roberts died at home in Houston. She was a Black trans journalist, probably best known for her blog, TransGriot. She was active in local and national politics, and worked hard to lift up others in her community. Like me, Roberts, 58, was also very involved in the fight against anti-trans violence.

She was also my friend.

On a very hot and humid day in July 1997, I met Roberts at the International Conference on Transgender Law and Employment Policy. Both of us had only recently come out, and the seeds of our activism were firmly nurtured during that weekend conference.

She was, even early in her transition, a strong, capable activist seeking to affect change.

We kept in touch, off and on, ever since then, with both of us growing from greenhorns to well-known voices in transgender activism.

A decade after ICTLEP, she began her blog, an endeavor that would prove to be one of her greatest successes in a life filled with many. She wrote for other outlets, including the Advocate and http://www.ebony.com. She was also one who took center stage when necessary, to speak out about transgender needs.

Quite often, our work would intersect, particularly around anti-transgender violence. She and I would sometimes work in tandem on finding information on anti-transgender murders, me taking to news sources and her talking to contacts in local communities. She usually found information before I did, with my resources only helping to confirm information she had long since located.

Once, while going over a particularly challenging killing, she reminded me, proudly, that she relied on the "standards created by Gwen Smith" to determine if a case should be included. She relied on a case being confirmed, usually by at least one local news story, with a clear component of anti-transgender violence, or else she wouldn't list it on her site. She was a stickler for perfection in the data she would bring to the table, and while she may have dropped my name, honestly, it was she who was my better.

I mentioned her blog, TransGriot. A griot is defined as a West African storyteller, sometimes a singer or poet. Her goal with the blog — in her own words — was to, "introduce you to and talk about your African descended trans brothers and trans sisters across the Diaspora, reclaim and document our chocolate-flavored trans history, speak truth to power, comment on the things that impact our trans community from an Afrocentric perspective, and enlighten you about the general things that go on around me and in the communities that I am a member of."

Over several years during the last decade, the two of us were attendees of the NLGJA's media convening, a gathering of largely independent and freelance journalists from diverse backgrounds. We'd usually try to find at least a moment outside of the event where we could sit down and talk, often as a trio with Cristan Williams of the TransAdvocate blog. We'd discuss among ourselves the state of trans journalism and make plans for the future. Some came to pass, while others, sadly, never will.

It was on one of these trips where we visited the White House during the Obama years, taking a photo together at the north entrance. On another, she discovered that across the street from the hotel we were staying at was the site of an early sit-in started by Black gender-variant teens at what was then Dewey's lunch counter in Philadelphia. We hurriedly grabbed every trans person we knew at the convening and went across the street for a photo out front.

When Roberts died, word trickled out slowly. I spotted a post or two via social media, but there was almost no information with them. I thought of Roberts herself, who would be demanding confirmation. Frankly, too, I could not believe that she could possibly be gone. (The New York Times reported October 13 that Roberts' mother, Mable Roberts, said she had suffered from chest pains the day before her death and that the medical examiner had found blood clots in her lungs.)

A close friend of hers confirmed her death the next day, but in the interim, the Houston Police Department put out its own narrative, claiming that she was the apparent victim of a hit-and-run. It's a bitter irony that the police spread such a tale, given her own work to hold us all to a higher standard on reporting anti-trans killings.

On her blog, she worked hard to fight against the narratives surrounding anti-trans killings, in particular the number of outlets that would opt to use the birth names of transgender people in their stories. Oftentimes, this was the only name those papers would have, getting their information from the local police or, in some cases, from non-supportive family.

I have, thankfully, not seen a single story about her passing that uses her deadname. I suppose this is progress, but given my druthers, I'd rather not be reading about her death at all.

I mentioned Roberts' involvement in politics earlier. Her very last tweet was discussing her anticipation to participate in early voting on October 13. She dearly wanted to vote against President Donald Trump and the Texas GOP, with the longtime desire to turn the Lone Star State blue.

She missed casting her ballot by eight days.

A poll recently published by Survey Monkey — admittedly not the best pollsters out there — shows Democratic presidential candidate Joe Biden up by 1% in Texas. It's still a bit of a long shot, but I would like to think that if there's an "out there," then Roberts is looking down smiling.

Hers is a smile I very dearly miss.

Gwen Smith considered Monica Roberts one of the most vital voices in the trans community. You'll find Smith at www.gwensmith.com