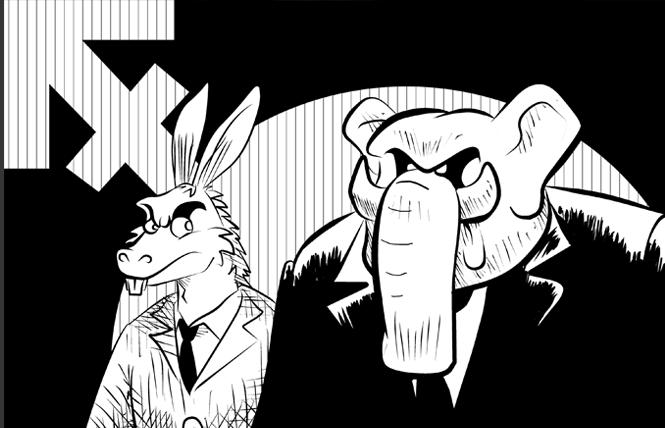 Allow me a moment to bellyache. I'm living in the middle of a heat wave, inundated with smoke from the wildfires, fighting an infection, and am just in general full of reasons to grouse. It is none of these maladies that is making me whine at the moment, however. Like many, it's the election that is playing with my mood right now.

It should come as no surprise that Donald Trump is facing some reelection woes. In spite of his penchant for bluster, his campaign is in deep trouble. The COVID-19 pandemic, coupled with the economic downturn related to it, has become yet another issue with the slow-motion train wreck that has been his presidency. A lot of his old chestnuts about draining swamps and locking people up are wearing thin, given so many of those closest to him are finding themselves running afoul of the law.

Because of all this, both he and the Republican Party are looking for fresh material.

Enter a group called the American Principles Project. APP and its political action committee of the same name have latched onto the wedge issue that will help keep the Trump train on track: transgender equality.

Yes, in a presidency that has already been marked by old school racism, misogyny, and xenophobia, this group has decided that the campaign will be spiced up with more anti-transgender animus. So much so that APP is ponying up $4 million in swing states to air fairly predictable transphobic political advertisements.

In Michigan, for example, it has dropped $2 million on a campaign extolling the horror of trans women participating in women's sports, as well as — and for this I simply must quote —"push[ing] children into dangerous, life-altering sex-change sterilization procedures at young ages."

This is nonsense. No trans kids are subject to any procedures that can remotely be called "sex-change sterilization procedures." At best, trans-identified kids are prescribed puberty blockers, providing them extra time to decide for themselves what steps, if any, they wish to take.

That's quite a bit different from what the ads would lead you to believe, arguing that such treatments are irreversible, and would somehow prevent a child from having time to determine their own best actions.

Of course, they argue it is Democratic presidential candidate Joe Biden, hand in hand with Michigan Senator Gary Peters (D), who are somehow championing all of this. (Peters is facing a tough reelection fight.)

APP is not new to this. Last year it was flogging this same horse, fighting on behalf of incumbent Matt Bevin in the Kentucky gubernatorial race. There, it was Democrat Andy Beshear it was messaging against, arguing that the candidate thinks "men [should] be allowed to participate in sports events for women and girls" and "men [should] be permitted to use women's restrooms."

Bevin lost that race but somehow APP took this as a victory, claiming that even though it went down in flames, it still managed to convince a few thousand people to join its side as a result.

Of course, the Trump presidency has been clearly anti-transgender. He banned trans service members, and the administration pushed to exclude transgender people from employment protections, health care, homeless shelters, and just about everything else it can. The Trump presidency has been nothing short of a disaster for transgender people, with the few rays of light being the rare cases when we have won a victory against the administration.

APP, however, is not saying that Trump needs to be tougher on transgender people, but it's pushing a messaging campaign that Biden and other Democrats have a radical agenda that will strip rights from women and girls while unleashing trans activists to recruit your children. Really, it's the same sort of anti-LGBT language we've heard since the days of Anita Bryant, with a new coat of paint slapped on it.

It is worth noting that Biden has been very trans-friendly, helping to push the Obama administration to be as trans positive as it was. It is also important to mention that he once called trans equality "the civil rights issue of our time."

Nevertheless, I think we can all agree that Biden is not exactly the most radical candidate to be found. I would go further, and say the appeal of Biden is because he is a center-right candidate who isn't likely to rock many boats and wants to play it safe with both sides of the aisle. That is also why I shall have to, once again, hold my nose this November when I cast a ballot for him.

Organizations like APP claim that the Democrats are all very much on board for some radical transgender agenda, but I can tell you for a fact that most Democrats would rather transgender people be happy with the odd scrap now and then, and otherwise just be quiet. You know, the way most minority groups get handled. I'd be happy to see some of them actually, visibly, fight for transgender issues in a way that could cost them some political capital. At least then I'd know they had a spine, and it wasn't all just pretty words.

I don't expect radical change from Biden, but I can't take any more of the anti-transgender actions of the Trump administration, especially in a second term where the whole lot of them may feel untouchable.

A lot of people will get needlessly hurt and killed in that scenario, and it could well be APP that helps make that happen.

They know where they can stick their wedge.

Gwen Smith wants any Democrat to be as radical as Republicans say they are. You'll find her at www.gwensmith.com