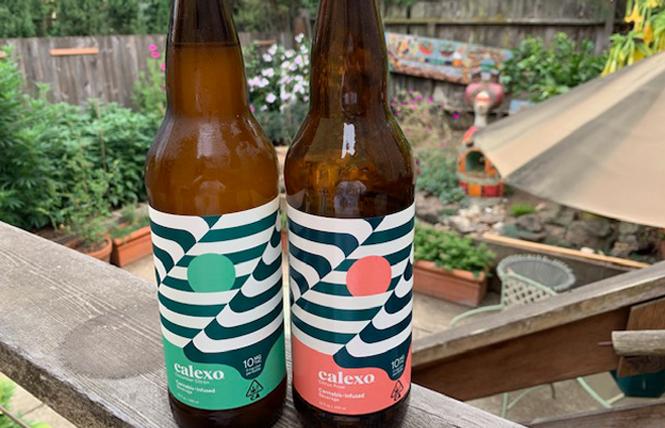 At the same time Governor Gavin Newsom announced his COVID-related shutdown of many businesses in March, queer entrepreneurs Brandon Andrew and Ian Colon were planning to launch of a new cannabis-infused beverage.

"We went ahead anyway," Andrew, a gay man who lives in Los Angeles and is a founder and CEO of the new company, Calexo, said in a telephone interview with the Bay Area Reporter.

Andrew, 30, a native Californian who produced dance parties in Boston, where he attended art school, is a newcomer to cannabis. "I preferred alcohol," he explained, which fit in with his jobs in restaurants and bars.

But several years ago, when he was diagnosed with cancer, Andrew's physician suggested he stop drinking to keep his liver as healthy as possible.

"I really didn't want to smoke," he said, "and wondered if I could find a way to consume it in a beverage." He tried a few products and wanted something better.

Andrew and Colon, who is bisexual and lives in San Francisco, raised money from friends and family and began working with chemists to produce a natural drink that would appeal to "a certain segment" of the population who were willing to pay more for the best.

When they told me that bottles of Calexo retail for $20-23, plus tax, for a 10 mg dose of THC, I mentioned that the price was in the stratosphere, compared to the $14 bottles of cannabis-infused lemonade, which contains 100 mg of THC.

"We know," said Andrew, pointing out that many cannabis consumers are not as price conscious as I am.

"Just try it and see how it compares," said Colon, who is chief marketing officer of Calexo. He brought me both flavors of the new beverage, Citrus Rose and Cucumber Citron.

"They are wonderful," I said after testing them, but I just don't think that a Grocery Outlet shopper like myself would spend $20 for a drink with 10 mg of THC, when I could buy something similar for $1.40 for a 10 mg dose. I should add that the Calexo is in a 22-ounce bottle and the lemonade concentrate is in an 8-ounce bottle.

The men both believe that the demand for a high-end beverage will make their product a win.
"We're confident we will succeed," said Andrew, who said that a wide range of people they know gave it a thumbs up after tasting it.

"The brand is committed to always using carefully-selected, premium ingredients with no artificial flavors, sweeteners, or colors, ever," said Andrew. Each bottle of Calexo contains all-natural juices, botanicals, sparkling water, and nano-emulsified THC, he said.

As part of Andrew's cancer treatment, physicians inject medicine into his eye once a month. "Cannabis really helps," he said. "I'm a believer."

When pandemic-related restrictions are relaxed and parties and other socializing resume, Andrew hopes they will have the opportunity to share the sparkling beverages and explain the principles and goals of the company.

"People are increasingly interested in respiratory health because of COVID," said Colon. "We think our timing, in some ways, couldn't be better. I still like to smoke a bowl, but most people who learn a beverage is available" would prefer it.

The men want to participate in compassionate use programs to offer their product to indigent people who use cannabis for medical reasons. They also hope to support the arts and, if legally feasible, have their beverages available at gallery openings.

As of now, Calexo is available for delivery in the Bay Area through https://www.ona.life/ and is sold at the Pharmacy, a Berkeley dispensary. The company plans to expand distribution to more dispensaries in the Bay Area.

SPARC gets retail license
And in news about other LGBTQ-owned companies in the Bay Area, SPARC, founded by Erich Pearson, a gay man, recently announced that it has been awarded the one and only cannabis retail license issued by the city of Sonoma.

The company plans to open its sixth location there in early 2021 (other locations are in San Francisco and elsewhere in Sonoma County). SPARC has agreed to allocate 5% of its profits from the new dispensary to support the Sonoma Valley Education Foundation, La Luz, and other local nonprofits.

The dispensary will also donate $4,000 per month in cannabis to support low-income medical patients and those needing palliative care, Pearson said.

The program will initially supply products to 30 patients and will be expanded in the future.

The deadline is September 18.