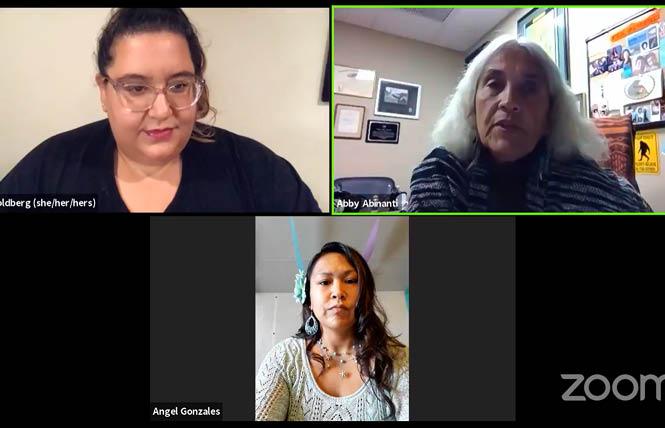 Two federally-recognized Native American tribes — the Yurok Tribe and the Cherokee Nation — joined five other plaintiffs in filing a federal lawsuit against the Trump administration August 27 due to what they say is an illegal change in foster care reporting requirements.

The complaint, filed in the United States District Court for the Northern District of California by attorneys with the LGBTQ civil rights organization Lambda Legal Defense and Education Fund, joined by Democracy Forward and the Michigan State University College of Law's Indian Law Clinic, alleges that the Administration for Children and Families violated the Administrative Procedure Act when in May it nixed Obama-era rules that child welfare agencies have to report data on the tribal membership and the sexual orientation of foster youth, as well as foster and adoptive parents.

States and local jurisdictions that receive federal foster care funding — to which some $10 billion in taxpayer funds are given annually — have to provide data to the Adoption and Foster Care Analysis and Reporting system, or AFCARS.

"By law, AFCARS has to collect comprehensive national information on the demographics and status of children in foster care and the assistance states are providing. [The U.S. Department of Health and Human Services] and its subdivision, the Administration for Children and Families, which runs AFCARS, has known its reporting requirements are outdated since at least 2003," Dubner added. "During the [George W.] Bush administration, they began to overcall AFCARS, culminating in a rule issued by the Obama administration in 2016. This rule added a number of data elements, including most relevant in this case, data on sexual orientation ... and data on how states implemented the Indian Welfare Act."

Dubner said that the 2016 rule was to come into effect in 2018, but was delayed by the Trump administration before it was done away with entirely, "taking out in particular the core sexual orientation data elements and the information to help tribes understand how states were and weren't complying with the Indian Welfare Act."

Dubner said this was an "overly capricious" move.

"Administrations can change policy but they must follow the Administrative Procedures Act when they do so and they must provide a reasoned explanation based on facts and evidence," he said. "The administration failed to do that here and we've sued to restore the law and return these protections to the organizations and tribes who need them."

Over 430,000 children are served in America's foster care system, and both LGBTQ and Native American youth are overrepresented, according to an August 27 Lambda Legal news release.

Plaintiff Angel Gonzalez of Facing Foster Care in Alaska, who is a former foster youth, pointed out during the news conference the on-the-ground need for data collection on the tribal identities and LGBTQ status of foster youth.

"I can see quite a few young people becoming homeless because they come out to their families and there is some kind of repercussion behind that," Gonzalez added. "That has a huge impact on these youths' lives, so we work very hard to try and alleviate that situation. It's already a broken system and being able to collect this evidence is a step in the right direction."

Abby Abinanti, the chief judge for the Yurok Tribe, said that the tribe joined the lawsuit because it can't exercise its responsibilities to tribal members without knowing where their foster youth are located.

"Without this information we are really being penalized and prevented from exercising our responsibility," Abinanti said. "That's primarily why we joined: to say, 'Wait a minute. You're hurting us, you're hurting the states, and you are causing tremendous fallout by not giving us this information. We have people across state lines and need to know where they are to exercise our responsibilities."

M. Currey Cook of Lambda Legal, one of the attorneys for the plaintiffs, touched on the need for LGBTQ foster youth data collection.

"The sexual orientation data elements removed by HHS and ACF in the 2020 rule [require] agencies to collect sexual orientation data for youth 14 and older on a voluntary basis and also for foster and adoptive parents and legal guardians," Cook said. "There is no nationwide data now on sexual orientation and gender identity for youth-in-care and also adoptive parents, so the decision in 2016 for ACF to include those was really important to the LGBTQ advocacy and really critical for those youth-in-care. ... LGBTQ+ youth are overrepresented in foster care and experience more severe disparities.

"LGBTQ+ youth in a survey in Los Angeles represented about 20% of kids in care there, and also LGBTQ+ youth had higher placements total while in care, greater juvenile justice involvement, and entered homelessness at higher rates, as well as more hospitalizations," Cook added. "Many commenters who opposed the 2020 rule change pointed out ACF funded studies into these disparities."

The Yurok Tribe, Cherokee Nation, and Facing Foster Care in Alaska are joined as plaintiffs by the California Tribal Families Coalition, the Ark of Freedom Alliance, True Colors Inc., and the Ruth Ellis Center.

HHS did not respond to a request for comment.