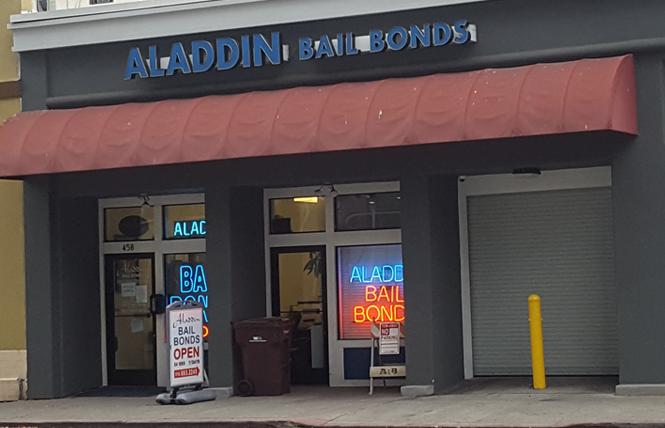 Aladdin Bail Bonds is leading the fight against Prop 25, which would end cash bail in California. Photo: Cynthia Laird

The criminal justice system — the focus of nationwide protests in the past few months — would be especially altered in California by three of the statewide propositions on the November 3 ballot.

Proposition 17 would grant voting rights to parolees, Proposition 20 would institute stricter sentencing laws and make it harder to attain parole, and Proposition 25 would effectively end cash bail in California.

Voting rights for parolees
Prop 17 would grant California felony parolees the right to vote. Under current laws passed in 1974, Californians convicted of felonies can only vote after they have completed parole.

"California is only one of a handful of states that denies the right to vote to people on parole but allows people on probation to vote," Samuel Garrett-Pate, the communications director for EQCA, said in a phone interview with the Bay Area Reporter. "There's not a huge differentiation but the result is de facto disenfranchisement because people on probation who are allowed to vote now sometimes don't because of the nonsensical distinction in law between the two."

Garrett-Pate said that if Prop 17 passes there will probably be greater LGBTQ representation in the electorate.

Edward Wright, chair of the Milk club political action committee, said that the PAC's positions on all the California propositions were approved by the club membership last week.

"I think Prop 17, along with Prop 25, are very much aligned with the Milk club's long-standing belief in the need for our criminal justice system to address long-standing disparities in how different communities experience justice," Wright said. "Voting rights are constitutional rights, not privileges. If we disenfranchise people based on having a criminal history or being incarcerated in the past, we are not only disempowering their voice in our democracy, but we are further entrenching racial and economic disparities in our politics."

The Alice club did not return multiple requests for comment.

"We want to allow people who have served their time to be fully part of our democracy," Boudin said.

Assemblyman David Chiu (D), whose district covers about 60% of San Francisco, mostly in the eastern half, said he supports Prop 17 because "it's imperative all parts of our communities in our civic democracy are able to have a say in the politicians and legislators who will shape our state."

Prop 17 is opposed by the Election Integrity Project California. As the B.A.R. reported last week, the project also opposes Prop 18, which would extend voting to some 17-year-olds.

"If the state does not trust [felony parolees] to choose where to live or travel, with whom to associate and what jobs to do, it MUST NOT trust them with decisions that will impact the lives and finances of all other members of society," a statement from the project to the B.A.R. reads.

"Crime victims deserve justice. Granting violent criminals the right to vote before the completion of their sentence is not justice," the statement added. "Offenders deserve justice as well. Their self-respect depends upon knowing that they have made full restitution for their crimes and have earned a second chance. Californians deserve a justice system where offenders pay for their crimes, prove their rehabilitation, and only then are welcomed back into civil society."

Stricter sentences
Prop 20 would undo parts of AB 109 (2011), Props 47 (2014), and 57 (2016) by reinstituting stricter sentencing laws, making it more difficult to qualify for early release, and granting parole boards more discretion. Drug possession and shoplifting could be charged as felonies again, as they could be before 2014. Those convicted of these crimes would have to submit a DNA sample for databases.

The bill and propositions were intended to reduce the state's prison population. Prop 20 was placed on the ballot by reaching the threshold number of citizen signatures and is being backed by law enforcement unions and advocacy groups, as well as legislators such as Assemblyman Jim Cooper (D-Elk Grove), a former Sacramento County sheriff's captain, who did not respond to a B.A.R. request for comment.

Proponents argue that the reforms of the last decade have made Californians less safe, and the list of "serious" crimes is too short.

Prop 20 is opposed by EQCA, the Alice and Milk clubs, Boudin, and the California Democratic Party.

"We obviously supported Prop 47 in 2014 to categorize non-violent crimes as misdemeanors and Prop 57 in 2016 to give people a shot at early release," Garrett-Pate said. "LGBTQ+ people will be disproportionately impacted by this because they are overrepresented in our justice system. Trans and gender-nonconforming people are unfairly targeted by law enforcement. Reforming the criminal justice system is a key part of our work and we think this proposition would go against that."

Wright of the Milk club said that Prop 20 goes against the grain of the recent protests calling for criminal justice reform.

"We are in the midst of a nationwide movement and this is attempting to take a step back," he said.

Boudin said Prop 20 would be an unnecessary expenditure of taxpayer and law enforcement resources.

"I oppose it because Prop 20 would undo really imperative criminal justice reforms in recent years that have allowed us to focus law enforcement resources on the most violent crimes," Boudin said. "[Prop 20] would waste tax dollars on overly punitive approaches."

Chiu agreed that the proposition is not a direction the state should go.

"It's headed in the wrong direction from the important conversation on criminal justice reform we've been having in recent years," he said.

Cash bail
In 2018, the state Legislature passed and then-Governor Jerry Brown (D) signed SB 10, a bill ending the practice of cash bail. Before the bill could go into effect (which it was slated to in October 2019), however, opponents of SB 10 gathered enough signatures to put the question to voters.

If passed, Prop 25 would allow SB 10 to go into effect and California would abandon cash bail.

Already, New Jersey and Alaska no longer use cash bail in most cases.

Aladdin Bail Bonds, the largest bail bond company in the United States, is opposed to Prop 25. It did not respond to a request for comment.

But while bail bonds providers are thick on the ground opposing Prop 25, some criminal justice reform advocates are as well because of their issues with SB 10. The late San Francisco Public Defender Jeff Adachi said SB 10 "provides judges with really unbridled discretion to be able to detain anyone, even people charged with misdemeanor crimes."

Boudin, who has ended cash bail in San Francisco, said he is not planning on taking a public position on Prop 25.

"A no vote would be taking a side with the for-profit bail bond industry, but a yes vote would be supporting legislation I opposed in its final form," Boudin said.

At the time of SB 10's passage, Boudin, then a deputy public defender, echoed the concerns of his late boss that it has the potential to expand the number of individuals in pre-trial detention.

"Under SB 10, now prosecutors can seek detention for virtually any crime," Boudin told NPR in a 2018 interview. "I was disappointed and I felt betrayed."

Boudin told the B.A.R. that he was "part of the original committee" to look at the issue but it was changed last-minute.

"It was not collaborative or transparent and was done at a time that didn't allow for meaningful discourse or debate," Boudin said about the final changes that rendered the bill unacceptable to him.

EQCA, the Milk and Alice clubs, and the state Democratic Party support Prop 25.

"EQCA was supportive of SB 10 to reform the cash bail system," Garrett-Pate said. "The cash bail system disproportionately impacts people of color, members of the LGBTQ+ community particularly. Our system is broken and we need to replace the current system where people who commit minor crimes sit in jail because they cannot afford bail."

"I was a co-author of the bill, so I was one of the legislative advocates for reforming the system," Chiu said. "That whether you release someone before trial is a function of their income is fundamentally unfair. We need to get rid of cash bail [and not] overturn what we did in the Legislature."