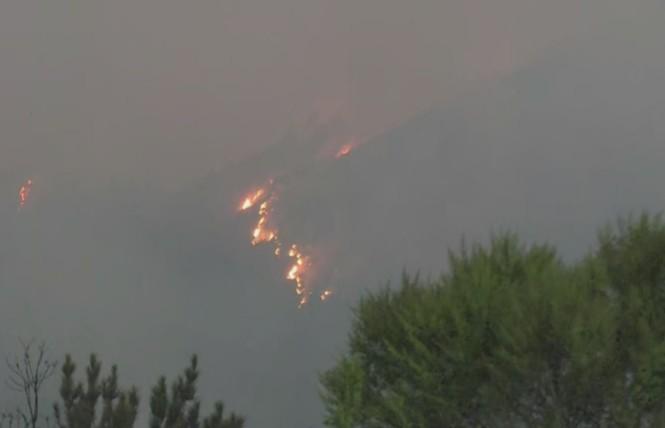 Guerneville, the LGBTQ vacation destination, is one of many communities grappling with the fires raging through California as a result of lightning strikes.

One of them is the Walbridge fire, part of the LNU Lightning Complex fire that broke out earlier this week.

Keith Alton Sattelmaier, 42, is a gay homeowner in Guerneville who was evacuated along with his partner on Tuesday.

"Midday [Tuesday] my partner got a call from the emergency alert system that warned about the fire," Sattelmaier told the Bay Area Reporter in a phone interview August 21. "Around 4:30 we got a mandatory evacuation order: 'You have to go as soon as you can.' We have a metal roof and I had to clean the pine needles off of it.

"By 9:30, the sheriff was coming around with flashing lights and sirens," Sattelmaier added. "That's the 'you're on your own, Jack,' and we took off."

Sattelmaier said that he and his partner, Gary Rhoades, saw the flames from a nearby hill as they figured out where to go next.

"We spent an hour and a half up there," Sattelmaier said. "It was eerie: you could see its glow in the night sky."

Sattelmaier initially stayed with a friend in Vallejo while Rhoades stayed with a co-worker in Santa Rosa. The two eventually found a hotel to stay in together with their two dogs, which is being paid for by his partner's employer.

Sattelmaier said he hadn't been able to eat a full meal for several days, but he was finally able to do so Friday because he received some "unexpected good news."

"We left our chicken coop behind," he said. "Animal control said they were pretty confident they'd be able to add us to the drop list for food and water."

Since animal control indicated it'd be able to feed the couple's chickens, Sattelmaier surmised his home was probably not destroyed.

Sattelmaier said that Sonoma County will need "a shot in the arm by the taxpayers" to recover.

"For so many people on the [Russian] river, this is devastating," Sattelmaier said. "Shelters are dicey places on a good day. So many people are marginally housed, just barely getting by, on the river."

The novel coronavirus pandemic adds another layer of uncertainty for staying in shelters.

Fires triggered by the recent lightning storms are burning around the Bay Area and throughout California. State fire officials Friday said crews were battling 560 active blazes across the state and that 119,000 residents had been ordered to evacuate their homes.

Governor Gavin Newsom activated the State Operations Center to its highest level and declared a statewide emergency due to the widespread fires and extreme weather conditions that have complicated efforts to gain control of the fires.

One of the more devastating is the SCU Lightning Complex Fire burning in Santa Clara and Stanislaus counties. The fire has burned approximately 229,968 acres and more than 8,000 homes, according to state officials. Cal Fire said it was only 10% contained as of Friday.

Another rampaging conflagration is the CZU August Lightning Complex fire that has destroyed historic buildings in Big Basin Redwoods State Park, California's oldest state park, and led to the closures of multiple park sites along the Central Coast and in the Santa Cruz Mountains. They include Año Nuevo, Big Basin and its Rancho Del Oso area, Butano, Castle Rock, Henry Cowell Redwoods, and Portola Redwoods.

"The fire damaged the park's headquarters, historic core and campgrounds. All campers, day-use visitors and State Parks staff at Little Basin and Big Basin were evacuated," according to the state parks.

The fire, at zero containment as of Friday, has burned roughly 50,000 acres and is threatening multiple communities, including the UC Santa Cruz campus. Over 64,000 people have been evacuated from parts of San Mateo and Santa Cruz counties due to the CZU Lightning Complex fires, according to Cal Fire numbers Friday afternoon.

Former Santa Cruz mayor John Laird, a gay man running for a state Senate seat in November, has been posting daily updates on his Facebook page about the fires bearing down on communities in and around Santa Cruz County.

"More firefighters have arrived, putting the number on this fire at about one thousand - which is still way short of what they need," wrote Laird in an early August 21 post. "Some of the initial losses are really becoming apparent - the Last Chance neighborhood appears devastated, and the buildings at Big Basin Park appear all gone although the big redwood trees appear to have survived. Houses have been lost between Big Basin and Boulder Creek - and many in Bonny Doon."

"This is a disaster, no doubt," stated Canepa, who also serves on the Bay Area Air Quality Management District Board of Directors. "As crews continue to battle these deadly blazes, smoke has spread throughout the Bay Area, putting those with respiratory problems at greater risk of illness or even death, especially as the COVID-19 virus continues to spread in our communities. My message to residents today is stay indoors and be prepared to do so for a few days, otherwise the fires may claim even more victims."

For the latest information on state park closures visit www.parks.ca.gov/Incidents

To see the most up-to-date information on the wildfires, visit https://www.fire.ca.gov/incidents/