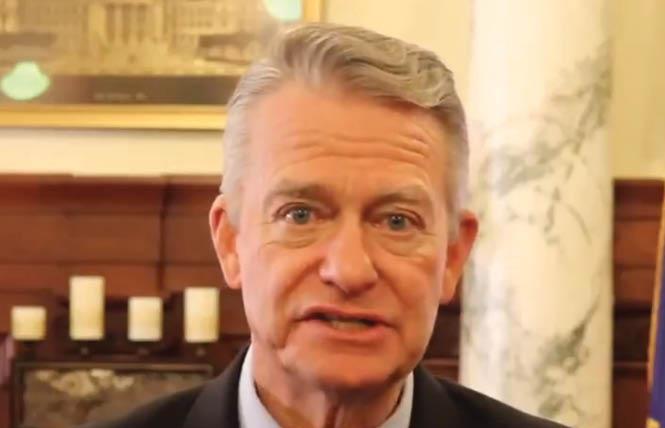 Idaho Governor Brad Little signed a pair of anti-LGBTQ bills into law that have resulted in injunctions by federal judges.

A federal district court in Idaho ruled against an effort to make it illegal for transgender people in the state to change the gender marker on their birth certificates.

Meanwhile, a second federal judge issued an injunction on a law banning trans athletes from participating in student sports.

In the birth certificate case, F.V. v. Jeppesen, Judge Candy W. Dale of the United States District Court for the District of Idaho ruled August 7 that House Bill 509 — which was passed by the Idaho Legislature and signed into law by Governor Brad Little (R) — violates a 2018 ruling from the district court stating that the Idaho Department of Health and Welfare cannot deny trans people the right to change their name on their birth certificates.

Nora Huppert, a trans woman who is a Daniel H. Renberg Fellow with Lambda Legal Defense and Education Fund, made oral arguments in federal court on behalf of the plaintiffs June 22.

The 2018 injunction was the result of a separate legal action spearheaded by Lambda Legal, according to Huppert in an August 19 phone interview with the Bay Area Reporter.

"The previous policy categorically banned trans people from changing their birth certificate," Huppert said. "We won the injunction to require Idaho to have some sort of process for people to do that."

The basis for the injunction was the 14th Amendment to the U.S. Constitution, which guarantees equal protection of the laws to all people. The district court also found that other state justifications for preventing the gender marker-changes "just didn't make sense," Huppert said.

Idaho lawmakers tried to find a way to effectively go around the district court injunction.

"What HB 509 does is, it does two things," Huppert said. "First, it banned anyone from obtaining a change to their sex on their birth certificate unless they could prove fraud, duress — being threatened with a gun, or material misstatement of fact. It banned everyone — transgender and cisgender — and that obviously bans trans people categorically from obtaining a correction.

"It also defined the material fact that could be listed — sex — in a way that excludes trans people categorically from being able to obtain a correction," she added.

The judge called the state's reasoning in favor of the law "hollow."

"The statute is directly at odds with the clear intent and mandate of the Injunction places IDHW in a difficult predicament over how to comply," Dale went on to state. "However, neither the constitutionality of the statute or actions of any person or agency other than the IDHW are adjudicated here. The narrow question before the court that is decided today is whether IDHW's revised application form and instructions violate the injunction. For the reasons stated above, the court finds that they do."

Idaho has since reverted to pre-HB 509 policies and Lambda Legal, a national civil rights legal group that works on behalf of LGBTQs and people living with HIV/AIDS, is remaining on guard for future attempts to prevent trans people from correcting their sex on their birth certificate.

"We are vigilant and are awaiting any deviation the state might attempt," Huppert said.

Huppert said that state laws on the subject are in a constant state of flux.

"It's a little up in the air," Huppert said. "At the time of the injunction, in 2018, only four states had this policy. There's an ongoing effort to change the policy in Ohio," but the West Virginia Supreme Court [of Appeals] made a ruling in June on the other side of the question.

Scott Graff, the public information officer for Idaho Attorney General Lawrence Wasden (R), responded to the B.A.R.'s request for comment made via phone by saying that the office will not comment.

"I have received your voicemail," Graf wrote. "Thank you for the opportunity but our office will decline comment."

Injunction on trans athlete ban
Meanwhile, in a separate case August 17, a federal judge granted an injunction against the enforcement of a ban on transgender athletes from participating in student sports.

The suit in the matter of Hecox v. Little was brought by Lindsay Hecox, a trans student at Boise State University who is transgender who'd been wanting to do cross country.

"I feel a major sense of relief," Hecox said in a news release from the American Civil Liberties Union, which represents her. "I love running, and part of what I enjoy about the sport is building relationships with a team. I'm a girl, and the right team for me is the girls' team. It's time courts recognize that and I am so glad that the court's ruling does."

"Despite the national focus on the issue, Idaho is the first and only state to categorically bar the participation of transgender women in women's student athletics. This categorical bar to girls and women who are transgender stands in stark contrast to the policies of elite athletic bodies that regulate sports both nationally and globally — including the National Collegiate Athletic Association ("NCAA") and the International Olympic Committee ("IOC") — which allow transgender women to participate on female sports teams once certain specific criteria are met," the ruling from Judge David Nye of the U.S. District Court for the District of Idaho states.

The court ruled that the ban was unconstitutional under the equal protection clause of the 14th Amendment.

"The constitution must prevail," the ruling goes on to state.

Both of the anti-LGBTQ Idaho laws resulted in the state of California and San Francisco adding the Gem State to the list of banned states for non-essential taxpayer-funded travel, as the B.A.R. previously reported.

For five years now both the state and city have restricted taxpayer-funded travel to states that discriminate against LGBTQ people except for emergency purposes. The Golden State's "no-fly" list covers government workers, academics, and college sports teams at public universities.