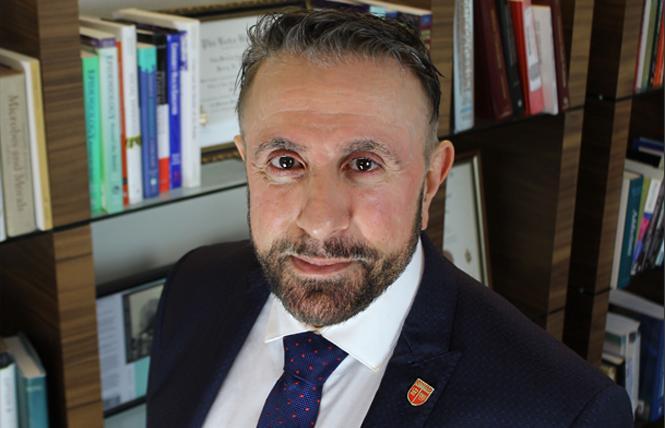 Perry N. Halkitis is the dean of the Rutgers School of Public Health.

LGBTQ Latino and Black youth have their first sexual experiences at earlier ages than LGBT white youth, according to researchers from the Rutgers School of Public Health.

Perry N. Halkitis, a gay man who is the dean of the Rutgers School of Public Health, discussed the results of the study in a July 16 phone interview with the Bay Area Reporter in which he also discussed how the COVID-19 pandemic intersects with gay sexual ecology.

The study, "Age of Sexual Debut among Young Gay-identified Sexual Minority Men: The P18 Cohort Study," was published in the Journal of Sex Research July 1. It found that the average age of sexual debut for same-sex male sexual encounters was 14.5 years. Some 19% of participants said that their first such experience was before the age of 13. The survey included 600 people; of those, 424 were involved in the analytic study.

Halkitis said that the gap between minority and white people was not very big — but that it points to larger inequalities between the social groups. The study states that lower ages of sexual debut are connected to higher rates of HIV infection and drug use.

"I never meant to make it about race — it's probably about socioeconomic context," Halkitis said. "It's not like 10 years later the white guys are showing up. It's that, one, lower [socioeconomic status] connect with worse health outcomes and, two, that's because people of lower [socioeconomic status] have less access, which leads to greater stressors in life, and Black and Brown men are experiencing racial stressors, and people who have stressors tend to engage in risky activities at higher rates."

As the B.A.R. previously reported, a number of health issues affecting queer people are what Halkitis called not an epidemic but a "syndemic." These include HIV infection; abuse of alcohol, tobacco and other drugs; methamphetamine use; and lack of access to health resources. These disproportionately affect those who are often discriminated against within the LGBTQ community — Black people, Latinos, and transgender and gender-nonconforming individuals.

"With minority stress theory, it's not surprising that they engage in risky behaviors at even higher rates than other people," Halkitis said. "It's not like these guys want to engage in risk, be obese, or become a meth addict. It's conditions in life that put them in these situations. Most people don't want HIV, or COVID, but people are put in situations. People don't just wake up being irresponsible."

Intersection of the syndemic and COVID
These same issues, particularly economic necessity and less health care access, are what has led to a worse COVID-19 pandemic among people of color than among white people in the United States.

In San Francisco, the Latino community has been harder hit than any other group. Despite comprising 15% of the city's population, Department of Public Health statistics show 49.7% of novel coronavirus cases in San Francisco are among Hispanics and/or Latinos.

Halkitis said he is not surprised.

"The worse HIV outbreak in the country is among poor, Black, gay men in the South," Halkitis said. "Why anyone is surprised about COVID is beyond me."

As the B.A.R. previously reported, it was suggested by medical professionals at the beginning of the pandemic that LGBTQs will be more likely to contract COVID-19 because of the unique issues faced by the community that overlap with Halkitis' syndemic.

Halkitis tied these predictions to the minority stress theory.

"One could argue, as a gay man you are more likely to get COVID because you are stressed upon," Halkitis said. "But there is a little silver lining with HIV — it looks like HIV-positive people are not getting sicker because of COVID and maybe — maybe, maybe, maybe — there's some protection from tenofovir. ... It seems to be something, some kind of internal mechanism is going on that we don't understand, but I'll take it."

Tenofovir is one of the drugs used to treat HIV.

Whether or not the antiretrovirals used to treat HIV or prevent infection offer protection against COVID-19 infection, and what kind of protection that is, is currently a hotly debated issue.

A Spanish study last month claimed to show that HIV-positive people who were on treatment were indeed less likely to have contracted the novel coronavirus.

Critics, however, quoted in a July BodyPro article, believe that the Spanish study did not include enough controls or a large enough sample size to say much of anything.

Halkitis said that two things needed to be done to address the findings of the Rutgers study. First, "it is no longer acceptable that we don't have same-sex sex education in schools."

"I remember, as a young gay man going into health education, hearing about heterosexual sex and thinking 'I don't like girls' and so it's meaningless to people in same-sex relationships," he said.

Second, health officials need to treat the syndemic as one issue.

"If I wanted to disentangle even more, I'm sure the higher socioeconomic status guys [in each ethnic/racial group] are not engaging in sex at younger ages. It's about evening the playing field," Halkitis said. "[President Donald] Trump: you don't end AIDS by 2025 (https://www.ebar.com/news/news//287807) by putting people on meds. You have to change social conditions."

Online Extra: LGBTQ Agenda: LGBT people may be at higher risk from COVID-19