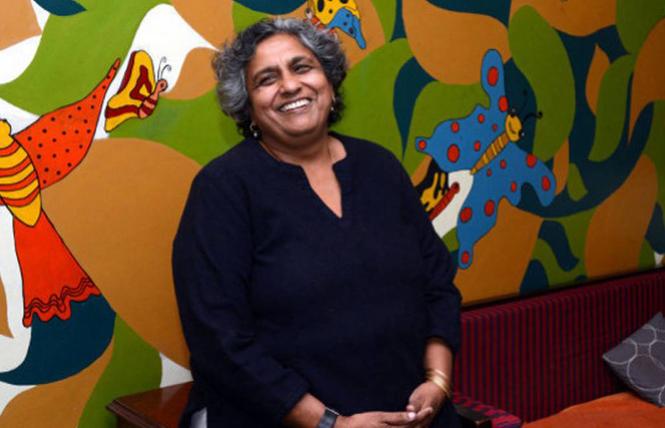 Many years ago, a young gay man, who came regularly to the Naz Foundation (India) Trust, disappeared for several months.

When he returned to Naz, he looked "absolutely shattered," Anjali Gopalan, founder and executive director of the foundation, recalled while sitting across from the Bay Area Reporter in her office in Delhi earlier this year.

The young man's family had taken him to counseling and to various hospitals around Delhi, where at one facility he underwent shock therapy.

"The next morning, I went to the police station and filed a complaint," said Gopalan, angered by the incident. However, she was unsuccessful. "They refused to accept my complaint, saying that this was a criminal act of a criminal, according to the laws," she said.

The police officers were referring to Section 377 of India's penal code, which criminalized sexual behavior "against the order of nature." The vaguely-worded British colonial-era law was often used against gay and bisexual men.

That's when she decided that after nearly a decade of fighting against HIV/AIDS, even though she had started working with the police, she had to work at doing away with Section 377.

Gopalan launched the first lawsuit to strike down Section 377 in 2001. The Delhi High Court scrapped the law in 2009.

India's Supreme Court reinstated the law in 2013, but in 2018, the court finally struck down the law in a unanimous landmark decision.

HIV/AIDS activists are hopeful that the end of Section 377 will lead to less stigmatization and discrimination against not only the gay community, but others who are living with HIV. They are hopeful that it — along with the passage of a bill that banned discrimination against HIV-positive people in housing, education, and the workplace — will also break down barriers to HIV prevention and testing.

"I think that was one of the best things that could have happened because without that happening there was no way to take this course forward," said Gopalan.

At the beginning of this year, the Bay Area Reporter traveled for five weeks throughout India. During that time, the paper met with HIV/AIDS activists and experts to discuss the state of the AIDS health crisis today and actions India is taking to combat the epidemic.
Gopalan, a 62-year-old ally, has been advocating for HIV/AIDS causes since 1994, a year before she launched the foundation.

"If the community is still criminalized you cannot even begin to talk about rights," she said. "So, it was really important to get the community decriminalized so that we could then start thinking about how we can secure rights for people."

Changing laws and culture
Indian HIV/AIDS advocates are aware that laws can only go so far.

Experts believe that decreased stigmatization and increased education about HIV/AIDS and sexual health will help take India out of the top five countries with the highest population of people living with HIV. About 86% of new infections were sexually driven in 2017/2018, according to Avert, a global HIV/AIDS website.

The bigger challenges ahead are changing cultural attitudes, stigma, and discrimination against LGBT people and people living with HIV.

Many LGBT and HIV-positive Indians still leave their families and villages and move to larger cities in search of community and support due to discrimination and stigma they receive at home, said Dr. V. Sam Prasad, country program director of the AIDS Healthcare Foundation in India.

India has 2.1 million people known to be living with HIV as of 2017, the most recent year for which statistics are available from UNAIDS. The country is home to an estimated 1.3 billion people, based on United Nations data.

However, the number of people living with HIV has remained stagnant for at least a decade, according to Prasad. That means that India isn't close to being able to implement prevention programs supported by global HIV/AIDS organizations, such as UNAIDS' "Undetectable Equals Untransmittable" campaign.

Despite the numbers, the country has made progress reducing new HIV infections by half since 2001, according to Avert.

HIV/AIDS activists on the ground point out that neither India's government nor themselves really know what India's true HIV/AIDS infection, treatment, and death rates are due to lack of testing.

There is a huge gap between the number of people who have been tested and treated for HIV and those who remain untested, Prasad pointed out. He estimates the real number of untested Indians could be much higher than government figures of between 300,000 and 600,000.

The 54-year-old HIV/AIDS activist works with the foundation through his trust, the Lakshya Trust, doing HIV/AIDS education, prevention, and testing, particularly for men who have sex with men and transgender communities, in the Indian state of Gujarat, in the western-most part of India. The foundation has partnered with 20 HIV/AIDS and LGBT organizations in 17 of India's 29 states and seven territories, Manvendra said.

India continues to experience a combination of government propaganda and inaction with campaigns paying lip service to the epidemic while providing little funding for HIV/AIDS prevention education and testing, experts said. Much of the country's HIV/AIDS focus in recent years has been on treatment.

Gopalan is fearful about India's current situation with HIV/AIDS and the shift away from prevention to care.

"We are actually seeing a rise in the gay community," she said, concerned about prevention work not being done anymore. "I think that things are sliding back to where they were and my fear is that we should end up right back to where we began."

"This is an extremely political virus," she added. "Getting a government to respond is like pulling teeth, it's not easy especially in a country like this where government doesn't really care about what happens to its people."

HIV/AIDS advocates have little power when India's government funds more than 80% of its national HIV program, according to Avert.

There isn't a "sizable budget to cover the large population of India," said Prasad.

Today's work between government officials and LGBT and HIV/AIDS advocates is a far cry from when then-Health Minister Ghulam Nabi Azad made homophobic comments at an HIV/AIDS conference in Delhi that outraged LGBT Indians in 2011.

One of the positive outcomes in recent years is that some regional and national health ministers have been open to working with Indian LGBT and HIV/AIDS activists in an effort to increase awareness and education about issues, said Manvendra.

Manvendra added that the corporate sector, with its increasing engagement in the public sector and working with HIV-positive employees, is an additional partnership that needs to be developed.

"It is important that corporate sector joins hands with us not just for fighting but also to spread awareness," he added.

Manvendra observed, "The stigma is reducing in different areas depending on how much education and how much awareness is being created," along with "the political will of that state."

Moonlighting
Manvendra and Prasad are attempting to work with India's government to provide more testing, especially among high-risk communities that operate outside of the typical HIV/AIDS clinic hours.

India's estimated 23,400 HIV/AIDS clinics are operated by the government, health facilities, and public/private partnerships. They saw an estimated 30 million clients between April 2018 and April 2019, almost doubling testing from 2016-2017, according to Avert.

Prasad is attempting to take India's HIV/AIDS battle into the 21st century, he said.

"We are also making inroads through these various approaches," said Prasad, working to reach the "hidden LGBTQI community" and sex workers through campaigns on apps and social media.

These communities also operate outside of normal clinic hours, which means testing and counseling has to go to them, Prasad said.

The foundation's pilot program, Moonlight mobile testing and counseling, goes to cruising spots and hot spots where they can do rapid HIV testing, hand out condoms, and provide counseling and education services to communities often missed by standard programs.

"On a single night, sometimes, our percentage of positivity turns around 20% to 30%," said Prasad about the mobile units that go out to various communities between 5 and 11 p.m.

The program was a success that gained the attention of Naresh Dayal, secretary of the Indian Health Ministry, Prasad said.

"I think that is a model that has to be done in India and has to be scaled up in India," he said.

India may not be ready for some modern advances in the battle against HIV/AIDS. Advocates agreed PrEP, a prevention method, won't work in India due to widespread attitudes toward taking daily medicine. There is some promise with post-exposure prophylaxis, or PEP, which can prevent HIV if taken within 72 hours after exposure.

If India does move forward with a PrEP program, Prasad believes the pathway to PrEP will be working with sex workers first and then expanding to the broader community, combined with ongoing education.

Something that has come out of the HIV/AIDS crisis in India is it has mobilized people to advocate for their rights.

"HIV was a blessing in disguise for the LGBT communities to organize themselves and come together," said Manvendra.

"The community itself is advocating for their rights, which is something that had not happened in this country before with any other disease. This actually strengthened them and gave them a voice," Gopalan said.

"I've always believed that if you do not value yourself you are not going to protect yourself," added Gopalan. "To me that's always been the crux of looking at the epidemic."

The Asia Pacific Coalition on Male Sexual Health announced Kamarulzaman's appointment to the position in its June 12 newsletter.

Apcom is a network of male sexual health organizations in Asia and the Pacific Islands, according to its website.

Kamarulzaman will officially step into her new role at the 23rd International AIDS Conference that will be held virtually due to the novel coronavirus pandemic on July 6-10. (The in-person conference was to have been held in San Francisco and Oakland.)

Kamarulzaman told Apcom that she wants to shed more light on the HIV/AIDS epidemic in Asia's diverse and challenging continent and bring more resources to the region. She particularly noted the criminalization of many behaviors, such as anti-sodomy laws, put people at risk with combatting HIV/AIDS.

Kamarulzaman expressed concern about many Asian countries' "poor performance" in achieving the 90-90-90 goals, with the exception of Cambodia, Thailand, and Vietnam.

The UNAIDS goal is to have 90% of people know their status, receive sustained antiretroviral treatment, and achieve viral suppression by 2020.

"Many countries in this region, including my own, are still not close to achieving these goals," she told Apcom.

She proposed finding new ways to scale antiretroviral therapy and face the challenges of scaling PrEP in the region.

She also wants to continue IAS' current campaigns, she added.