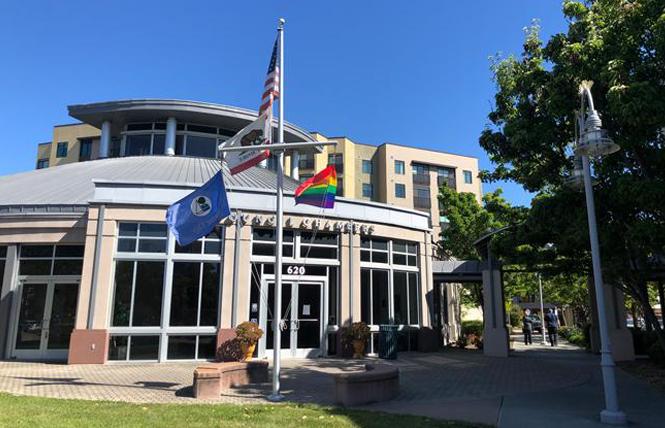 Congratulations to LGBTQ advocates, allies, and elected leaders in San Mateo and Contra Costa counties for achieving countywide sweeps of Pride observances for the first time this June.

As we've reported over the last several weeks, city and town councils in each jurisdiction have voted to recognize, in some fashion, June as Pride Month. The last to do so, Moraga, is expected to issue a proclamation Wednesday. Most are flying the rainbow flag or alternate versions, like the Philly flag that includes black and brown stripes or the Progress flag that includes those colors and the pink, blue, and white hues of the transgender flag. From East Palo Alto to tony Atherton, elected officials in San Mateo County took to heart requests from their constituents to show some Pride. In Foster City, where the City Council had originally declined to fly a Pride flag (but issued a proclamation), civic leaders reconsidered and last week hoisted one outside City Hall. Similarly in San Ramon in Contra Costa County, where at first City Hall was illuminated in the colors of the rainbow flag, the decision was made last week to fly the Philly Pride flag after all.

These supportive demonstrations are largely due to LGBTQ residents and straight allies who joined forces in a remarkable Pride Visibility Campaign, prompted by the social distancing recommendations to suppress the novel coronavirus. With in-person Pride gatherings — picnics, festivals, and San Francisco's mammoth parade — canceled this year, East Bay and Peninsula LGBTQs and allies decided that it was important for their cities and towns to observe Pride Month by flying a Pride flag in front of government buildings or in town squares.

In San Mateo, the county's LGBTQ commission took the lead, while in Contra Costa it was largely members of the Lambda Democratic Club and local PFLAG members.

The effort also brought into the conversation the importance of recognizing all members of the LGBTQ community, including people of color.

Speaking at the first Half Moon Bay flag-raising ceremony June 1, Dana Johnson, a co-chair of the county's Pride Initiative who also represents Redwood City on the San Mateo County LGBTQ Commission, called out the names of several African Americans whose deaths have sparked protests across the country — George Floyd, Breanna Taylor, and Ahmaud Arbery — as well as Tony McDade, a Black transgender man.

"We are still not safe to express our gender identity," said Johnson, who is Black and gender nonbinary. "Fifty years since the Stonewall riots and there is still a lot of work to be done. So let's get back to work and fight for justice for all."

In the East Bay, Lafayette Mayor Mike Anderson, in a video message posted earlier this month, noted that the city would have normally held a ceremony June 1 to raise the rainbow flag, but it was canceled like all public events this year. And Anderson, who is Black, noted the parallels between the LGBTQ community's fight for equal rights to the current protests led by Black Lives Matter activists outraged by the continued killings of African Americans at the hands of the police.

In that spirit, the visibility effort should increase for 2021, with all Bay Area cities and towns flying some version of the Pride flag. (Dixon is the lone holdout this year in Solano County.) A few cities this year that were the focus of the visibility campaign only opted to issue proclamations. And while those are important, they lack the visibility of a flag, which says to LGBTQs that they are valued members of that community. Atherton, for example, issued a proclamation this year, for the first time; that's progress in one of the wealthiest towns in the country, but next year its leaders should go further and vote to raise the flag.

Leaders of this year's visibility efforts started their work early, and that was key to their success, because as they experienced, some city leaders had questions while others needed to adopt flag policies. Additionally, the lead time also gave some elected officials the opportunity to gradually accept the idea as a positive act for their communities.

If your city didn't fly a flag this year, it can be a goal for next June. Reach out to your elected representatives and tell them why this worldwide symbol of queer visibility is an important statement that the San Francisco Bay Area has Pride and celebrates all people.