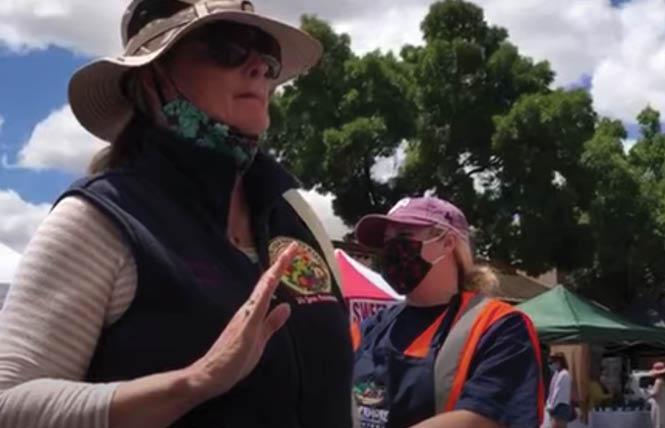 The farmers market management company whose director publicly berated the gay owner of a Livermore cookie company for handing out rainbow flags at his booth is now complaining of the "vitriol" it has received since video of the confrontation went viral.

Pride organizers released the video Monday, June 15, after not receiving any response from the CFMA regarding its concerns about its policies and Floyd made the decision to withdraw from the market after being cited for violating the vendor rules. He had launched his cookie business at the Livermore Farmers Market in June 2016 and opened his first brick-and-mortar location in the city last December.

Tuesday it was disclosed by Livermore officials that CFMA had abruptly resigned as the operator of the city's market, forcing its having to be canceled this coming Thursday and Sunday. The city and the local Pride organizers are working together to recruit a new farmers market operator.

CFMA operates 16 other farmers markets around the Bay Area, according to its website. It manages, for instance, the one hosted by the Fort Mason Center for Arts & Culture in San Francisco's Marina district. Leaders of the cultural facility have reached out to CFMA to raise objections about its prohibiting the distribution of rainbow flags at its market, and city officials have also raised concerns about the management company's policies.

Meanwhile, residents of other cities where CFMA oversees farmers markets have taken to social media to call for them to be fired or for people to boycott the markets until they are replaced.

In a letter sent to at least one organization that contracts with CFMA to manage its farmers market, CFMA President Doug Hayden expressed regret for "any harm caused by this misunderstanding" and pledged to "work to better disseminate market policies in the orientation of new members."

He added, "CFMA has received zero complaints, zero negative reviews and not one negative comment, nor has there been a single conflict over diversity or discrimination in our markets, with our staff or in any projects we have accomplished in 26+ years. CFMA wholeheartedly embraces vendors who express their individual identity through their stall merchandising, their product design or their decorations. This includes gay pride flags."

But Hayden also complained in the letter, obtained by the B.A.R., that CFMA has "come under attack from the local Gay Pride regarding the enforcement" of its rules and regulations. Hayden, who is married to Gail Hayden, contended the Livermore Pride group was asked to stop handing out the flags "because they had been deemed unsafe."

"To our astonishment, this event has mushroomed over the ability to hand out materials (18" gay pride flags) at the market without approval from market management. Add to this, the pointy-tip flags were being used by children as swords, nearly poking one child in the eye," wrote Hayden. "Safety and management protocol have taken on a new meaning to some in the Livermore community. Its now being categorized as Racial Bigotry and Sexual Discrimination. This interpretation is unfair."

CFMA, insisted Hayden, "does not enforce its rules in a discriminatory fashion, and does not ever single out any specific group. An item deemed unsafe has nothing to do with its cause or subject."

In response to the letter, the Livermore Pride board of directors released a statement to the B.A.R. expressing disappointment in how the Hayden family has conducted itself over the past week.

"Had CFMA been open to discussing this circumstance and engaging genuinely, yesterday's community and media interest would have been mitigated. By shutting down their social media venues, avoiding community discussion and giving inconsistent talking points to explain away the incident, CFMA created their own crisis," stated the Pride board. "Walking away, as they did today, is also not conducive to resolution, especially after stating in the media that they wanted to both resolve the circumstances and welcome Dan Good Cookies back to the Livermore Farmers Market."

The Pride board noted that due to CFMA's decision to end its management of the farmers market that, "sadly, their subcontracted vendors will suffer economically while another management contractor is identified that can commit to a diverse and welcoming Livermore Farmers Market."

The board also refuted a number of points that Hayden made in his letter regarding various aspects of the altercation and CFMA's rationale for its banning distribution of the Pride flags.

"We had hoped that CFMA would have reached out in the last week to offer their apology and commit to reconsidering their practices, but they did not," stated the Pride board. "They instead twice ignored Dan's correspondence asking for clarity on the rules and policies, and cited Dan for purported violations that were not among the infractions he was aggressively accused of that day. CFMA ignored all of the comments the community shared yesterday on the Livermore Farmers Market and CFMA social media pages."

Hayden in his letter also referred to CFMA staff doing Zoom interviews with local television stations about the incident. (CFMA has not responded to the B.A.R.'s interview requests.)

In one interview conducted in person with KPIX5, the local CBS affiliate, Gail Hayden told the reporter when asked about her comments to Floyd about the flags that, "I didn't really mean political, I meant in the sense that it's not food, it's in another category, it's the same as when animal cruelty people, factory farming, people against foie gras. Every market has 10 to 20 things that people argue about."

But the Pride board was critical of the various comments the Hayden family has made in the various media interviews and in its letter obtained by the B.A.R. They said CFMA's leadership has been spinning "a new defense for indefensible behavior" and that safety concerns wasn't stated as the rationale for the admonishment Floyd received that Sunday at the market.

The Pride board also called the Hayden's referring to a "free speech zone" where items can be handed out "a red herring since distribution of a Pride flag isn't 'speech,' nor is it political."

In contrast to Doug Hayden claiming in his letter that "any vendor is welcome to decorate their booth with lifestyle items," the Pride board stated that CFMA had sent Floyd an email with his citation that said, "Please note when wondering how to decorate your stall at the discretion of the market manager, a good guideline is 'food related.' It is all about cookies. That's the goal is to sell food."

In his letter, Doug Hayden wrote that they also tried to address the situation with community members via social media platforms to little effect.

"Unfortunately, the vast majority of responses do not seem to care about the liabilities or complications that arise when others decide to hand out whatever they wish inside a market. In fact, the vitriol has been unfair and extreme by any standard," he wrote. "Since this occurrence, physical harm and death threats have been made against the Association Staff and its vendors."

The Pride board in its statement to the B.A.R. condemned the threats that the Hayden family has received in the last two days.

"Ms. Hayden represents CFMA, and her family who works for CFMA defends her approach and continues to obfuscate this issue, as well as engage in public historical revisionism regarding its nature. We have sadly heard, however, that Ms. Hayden has been targeted with potentially violent threats, and want to remind everyone that no matter the nature of our disagreements, that there is no room for violence in a civil society," stated the board.

It added that, "Livermore Pride is pleased to be actively engaging with stakeholders and decision-makers to help ensure a timely and efficient transition that brings a positive new beginning to the Livermore Farmers Market and continues efforts toward an inclusive and welcoming community."

Overall, the Pride board stated it was "heartened by the love and support that Livermore and the region have shown" both Floyd and its executive director, Amy Pannu, who taped the confrontation at the market, "after learning about the disrespectful and discriminatory attitude they received."

The board added, "Our community has firmly said, 'This is not OK, enough is enough.'"