In what is perhaps the most stunning U.S. Supreme Court victory in history for LGBT people, the nation's highest court has voted 6-3 that a federal law barring discrimination on the basis of "sex" also prohibits discrimination based on sexual orientation and transgender status.

The court's decision June 15 in three cases testing the reach of Title VII of the federal Civil Rights Act came in one 33-page opinion consolidated under Bostock v. Clayton County. In words that will no doubt be highlighted for many years to come, Justice Neil Gorsuch, a Trump appointee who replaced the late conservative Justice Antonin Scalia, wrote:

"Ours is a society of written laws. Judges are not free to overlook plain statutory commands on the strength of nothing more than suppositions about intentions or guesswork about expectations. In Title VII, Congress adopted broad language making it illegal for an employer to rely on an employee's sex when deciding to fire that employee. We do not hesitate to recognize today a necessary consequence of that legislative choice: An employer who fires an individual merely for being gay or transgender defies the law."

"This is a huge victory not just for LGBTQ people, but for our country," said National Center for Lesbian Rights legal director Shannon Minter. "Today's decision will be remembered as a watershed in the history of LGBTQ rights, even as our country continues to grapple with the brutal legacy of racism."

Others said the court correctly read the law.

"The Supreme Court agrees with the straightforward reading of the law that we've been advocating for years," said Jenny Pizer, senior attorney for Lambda Legal Defense and Education Fund. "The words on the page say no workplace discrimination because of sex. There's no way to understand those words that excludes sexual orientation or gender identity. It means essential job protection for millions of LGBT people. That's more important than ever now as we grapple with the ongoing health pandemic and related economic challenges. For half a century, the law has promised workplace fairness. The court today agrees that promise protects LGBTQ people like everyone else."

While the decision interprets the reach of Title VII of the federal Civil Rights Act, the ruling is widely expected to be applicable to many other federal laws prohibiting discrimination based on sex. Among those laws are Title IX of the Education Amendments Act, the Fair Housing Act, the Equal Pay Act, the Equal Credit Act, and section 1557 of the Affordable Care Act, which bars discrimination in health care and health care insurance.

Just last Friday, the U.S. Department of Health and Human Services made final a rule change that reversed an Obama-era regulation interpreting the ban on sex discrimination under Section 1557 of the Affordable Care Act to apply to cases of transgender discrimination. In addition to undoing protections for transgender people, the rule change also rolls back protections based on sex stereotyping, women who have had abortions and those who speak English as a second language.

Title VII of the Civil Rights Act of 1964 prohibits employers who have more than 15 employees from discriminating "because of sex." The question was whether courts should interpret "sex" to encompass sexual orientation and transgender status. The court took up the issue in two separate oral arguments: one dealing with sexual orientation and one dealing with transgender status.

The sexual orientation cases were Altitude Express v. Zarda, from New York and the 2nd U.S. Circuit Court of Appeals, and Bostock v. Clayton County, from Georgia and the 11th Circuit. Both involved gay men who were fired after acknowledging they were gay. The 2nd Circuit said the employer's firing of parachute instructor Donald Zarda did violate Title VII. But the 11th Circuit dismissed Gerald Bostock's lawsuit, saying the court was bound to conform to an earlier decision by the 11th Circuit — a ruling that Title VII does not cover sexual orientation.

The transgender status argument came through Harris Funeral v. EEOC, from Michigan and the 6th Circuit. It marks the first time the U.S. Supreme Court has taken up the issue of whether a transgender person is protected by Title VII. The Harris case involves a funeral director, Aimee Stephens, who worked for years identifying as a male because that was the gender assigned to her on her birth certificate. But Stephens sincerely believed, since a young age, that her gender was female. When she got the courage to live authentically, she told her boss she would begin transitioning to live life as a woman. Harris Funeral fired her, and Stephens filed a complaint with the U.S. Equal Employment Opportunity Commission. EEOC ruled that Harris Funeral's action violated Title VII, and the 6th Circuit agreed.

Only 21 states prohibit discrimination in employment based on sexual orientation and transgender identity. Legislation has been pending in Congress for more than four decades, attempting to establish protections nationwide; but, the legislation — which has taken on different forms — has not cleared Congress. The House of Representatives last year passed the latest version, dubbed the Equality Act. But it has not seen a vote in the GOP-controlled Senate.

Stephens, the funeral home employee who brought the transgender complaint to the EEOC, died at her home in Detroit May 12 of kidney failure. She was 59. Zarda, the plaintiff in the Altitude Express case, died in 2014 in a parachuting accident. He was 44.

Bostock said his job with Clayton County, advocating for child abuse and neglect victims, had been his "dream job." The county fired him for "conduct unbecoming" after he joined a gay softball league. The loss of the job also meant loss of health insurance, just as Bostock was recovering from prostate cancer. Reached recently, Bostock, 56, said he is currently working as a mental health counselor for a Georgia hospital. 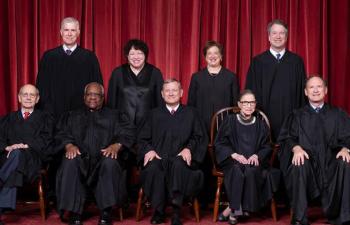 Not all the LGBT decisions have been good ones for LGBT people. In 2017 (in Trinity Lutheran v. Comer), the majority ruled that church schools should receive the same grants as state schools even if they discriminated against LGBT people. In 2018 (in Masterpiece Cakeshop v. Colorado), it hinted it might be open to allowing small businesses to discriminate against LGBT customers by claiming a religious exemption.

The scope of the Bostock decision potentially sweeps far beyond Title VII's protection in employment and will likely be cited by courts interpreting similar "because of sex" language in many other statutes.

"This is a huge victory for LGBTQ equality," said James Esseks, director of the American Civil Liberties Union's LGBTQ & HIV Project. "The Supreme Court's clarification that it's unlawful to fire people because they're LGBTQ is the result of decades of advocates fighting for our rights. The court has caught up to the majority of our country, which already knows that discriminating against LGBTQ people is both unfair and against the law."

But Esseks cautioned, "Our work is not done. There are still alarming gaps in federal civil rights laws that leave people — particularly black and brown LGBTQ people — open to discrimination in businesses [and] open to the public and taxpayer-funded programs. Congress must affirm today's decision and update our laws to ensure comprehensive and explicit protections for LGBTQ people and all people who face discrimination."