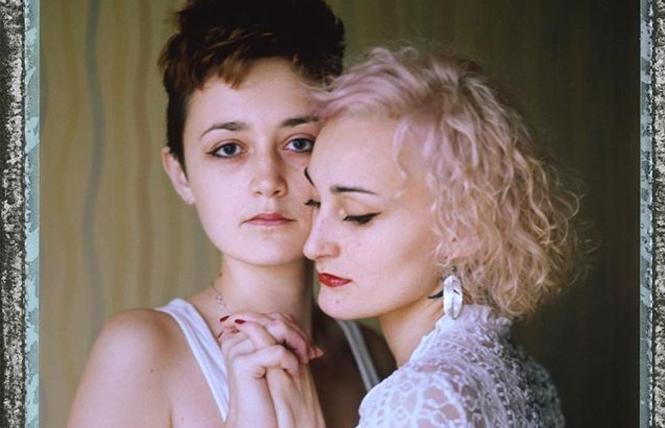 D.P., left, and O.N., received a favorable decision from the Convention on the Elimination of Discrimination Against Women. Photo: Courtesy of Robin Hammond via Instagram

The Convention on the Elimination of Discrimination Against Women made a groundbreaking decision in favor of a Russian lesbian couple.

It was the first time the 23-member CEDAW committee accepted and decided a same-sex case in its more than 40-year history.

"Our sacrifice makes at least some sense," O.N., 33, and D.P., 29, the Saint Petersburg lesbian couple who took Russia to task for refusing to recognize an attack they endured six years ago was a hate crime, wrote in an email interview. "It confirms our position that we were deprived of the opportunity to achieve justice and protection in our own country."

The couple added that the decision was "important for us" and they are proud that "our case has become historic," they wrote. The couple called it "one of the steps toward Russia without homophobia."

The couple requested that only their initials be used for safety reasons.

Polina Andrianova, 45, a lesbian activist with ComingOut, a Russian grassroots LGBT group, translated the email interview with O.N. and D.P. from Russian into English.

Svetlana Gromova, one of the couple's attorneys, praised the women.

"They are amazing," said the 39-year-old independent human rights attorney and ally who brought the case to CEDAW on behalf of the women and ComingOut. "All of my admiration to them, resilience, and to their stance of injustice."

"We are very excited and happy now about this decision," she said.

CEDAW is an international treaty of the United Nations that was adopted by the U.N. General Assembly in 1979. It came into force in 1981. The Optional Protocol came into force in 2004, according to the CEDAW website. Russia, along with 186 other member nations, has ratified CEDAW. Seven countries, including the United States, haven't ratified CEDAW.

Another same-sex case was being considered for review by the committee around the same time as the Russian lesbian couple's case was presented, but that other case was rejected, Frolova told the B.A.R.

Frolova declined to provide her age and sexual orientation.

The Russian Federation was advised by the committee to award unspecified monetary reparation, along with psychological assistance and an investigation into O.N. and D.P.'s case.

Years after the incident, the couple remain fearful because their attackers were never caught.

"We live in constant stress, feeling fear in crowded places or in the evenings in the empty streets, feeling discomfort even when we pass by a group of men on the street," the women wrote.

"We believe that justice has not been served because the aggressors were not punished and people with the same views as them believe that they can attack LGBTIQ people with impunity, even with some unspoken support from the state," the couple, who don't identify as LGBT activists, added.

The women lamented the sense of freedom they lost after the 2014 attack.

"Earlier, we could plan our future in Russia," the couple wrote about how they can't be affectionate with each other in public anymore. "Now, after the attack and the lack of punishment for it, we cannot envision our future in a country where we are deprived of all family rights and are not protected."

In an unusual move by the committee, the members also directed Russian officials to provide gender sensitivity training with enhancement for homophobic undertones, support for future hate crimes victims, and report back to the committee.

The committee's decision reaches beyond Russia's borders, affecting all of the countries that ratified CEDAW.

"It's so important to have a committee on the rights of women to say queer rights are women's rights," said Luiza Veado, 30, a bisexual woman who is the U.N. program officer at OutRight Action International.

Veado told the B.A.R. that in the past the committee has been "shy" and often remains "silent" about queer women, but this time for the very first time, the committee condemned Russia's actions against the couple's individual case and stated gender- and sexual orientation-based discrimination wasn't acceptable by the state and that the state should take action against this type of discrimination.

Advisories from one of the U.N.'s mandates must be followed by the member states that have signed onto the treaties, but it's up to the states to decide how to implement recommendations, experts said.

ComingOut, which is based in Saint Petersburg, provides community support; legal advocacy, education and training; and events for the LGBT community, said Andrianova.

Representatives of CEDAW did not respond to a request for an interview by the B.A.R.

The case
In the early morning hours of October 14, 2014, O.N. and D.P., who are media analytics professionals, were heading home, according to the decision. The couple, who had been dating for several years, exited the subway and headed toward their flat. On the way, they were openly affectionate with each other, kissing and holding hands.

At one point, they noticed that two unknown men were following them on the street. Before the women knew it, they were physically attacked. Homophobic slurs were hurled at them and they were threatened that they would be killed if they were ever seen again. The second man was filming the entire incident on his cellphone, according to the decision.

It was the beginning of O.N. and D.P.'s six-year ordeal fighting the Russian police and courts. They eventually took their case to CEDAW. The committee's decision was a win, but their battle isn't over yet, Andrianova and Olenichev said.

The women sought medical attention after the assault. According to the October 21, 2014 medical report, O.N. sustained a concussion and a hematoma on her left hip, according to the decision. D.P.'s injuries weren't immediately visible. On October 22, 2014, bruises appeared on her chin and left hip, but her injuries remained officially undocumented despite attempts to amend her police report.

The couple filed a police report after the incident, claiming it was a hate crime because they are a same-sex couple, and followed up with new information in the days following their medical exams.

At every turn, the couple said they were denied justice in their case.

"The situation in which we felt hopeless was directly related to the actions of the police," the couple wrote. "The next day, we found that the online media of Saint Petersburg and other Russian cities published a story about an attack on a couple of lesbians, a story that completely retold our statements to the police and even contained some of our personal data."

The incident made them feel revictimized, open to attack, and defenseless, and that they couldn't expect protection from the police, they wrote.

It only got worse from there, they said. The investigator didn't gather evidence despite the women providing him with a detailed map of the incident, directing him to the cameras, and to the site where the two women first encountered the assailants, according to the decision.

The investigator didn't visit the site of the incident until three years after it happened. By that time, the video from the subway and the streets was lost. Medical exams and other common evidence gathering practices weren't conducted, according to their lawyers and Andrianova.

Gromova said law enforcement and the court failed to recognize the "obvious" hate motive of the attack.

"They totally overlooked this fact," she said.

She said the "authorities' failure to make any efforts to find any evidence," noting that they didn't even investigate known anti-LGBT groups to see if the cellphone video was circulating and potentially locate the suspects.

The couple's multiple requests to recognize the case as a hate crime was denied by the investigator and the courts.

Russia doesn't recognize LGBT people as a social group, explained Andrianova, which is how officials classify people. Hate crimes against LGBT people generally get labeled as a "private conflict," she said.

Therefore, even if the suspects are caught, they won't be tried with a harsher charge for a hate crime.

Also, the investigator defied a direct order by the supervising prosecutor to open a criminal case after he declared there were grounds for opening a case, according to the decision.

Andrianova said hate crimes against LGBT people was "one of the biggest issues" with queer rights in Russia.

Combatting hate crimes and getting LGBT people recognized as a social group is one of ComingOut's long-term goals.

Russian authorities denied the allegations the couple and their attorneys made in the case, according to the decision.

The Russian authorities claimed the Office of the General Prosecutor didn't "find any evidence that the authors had been subjected to inhumane or degrading treatment or discrimination based on their sexual orientation," according to the decision.

The authorities defended their denial of reclassifying the crime to a hate crime because "no person had been identified to be charged," according to the decision.

"The state's argument that the plaintiffs can only file a complaint with the police after the police have identified the perpetrators is incorrect," he wrote in a statement to the B.A.R. "Police are required to investigate all crimes. It is the police who must quickly gather evidence, conduct an effective investigation, and verify all reasonable versions of the crime. In this case, the police did nothing."

The Russian authorities stated in the decision that, "The investigation into [the couple's] case is still in progress."

The activists and attorneys weren't surprised by the Russian authorities' actions and responses to this case, claiming it was status quo from the government.

"The authorities' action ... is actually quite typical to all these cases of hate crimes so it was not surprising to us that the authorities' stance would be like this," said Gromova.

Added Andrianova: "[The] Russian court system isn't exactly friendly to human rights or LGBT human rights. It's not a very independent court system that if the government has a homophobic agenda most of the judges are going to see the cases that way."

Fight not over
The couple's next step in the case will be another first.

O.N. and D.P. are working with Andrianova and the ComingOut team on the implementation of CEDAW's recommendations, particularly to make sure that the couple get the psychological support they need as well as the monetary compensation.

It hasn't been done before, but ComingOut is supporting O.N. and D.P. with their next case to "sue the police for an ineffective investigation because that is basically what they suffered from," said Andrianova.

ComingOut is also developing an education campaign for law enforcement and the courts to train staff on gender sensitivity with enhanced LGBT sensitivity and how to investigate hate crimes against the community.

"We plan to create a mechanism in Russia when the authorities do not investigate crimes against LGBT people," wrote Olenichev.

Additionally, Olenichev was pleased that, "The CEDAW decision allows continuing dialogue with the authorities on the protection of lesbians from violence in Russia."

Olenichev added that Russia is required to create a plan and report on the state's progress implementing the recommendations to the CEDAW core organizers and U.N.

The first draft of the plan is due in August, he wrote.

To read the decision, visit https://bit.ly/2Amg4Z3