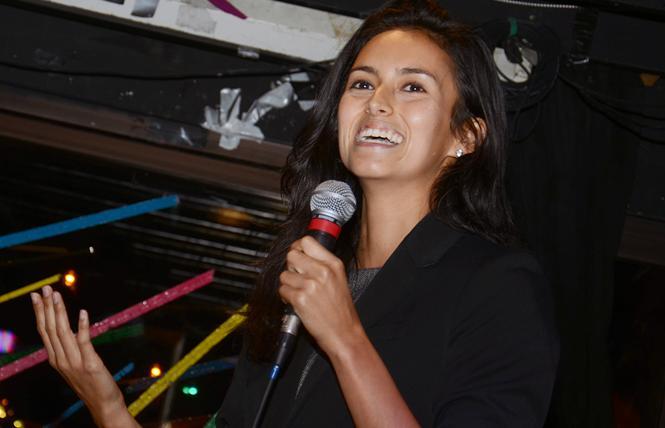 As protests to express outrage at police brutality grip the city and the nation, some local politicians are calling each other out for accepting money from law enforcement unions.

Jackie Fielder, a queer educator running for a state Senate seat against gay incumbent Senator Scott Wiener (D-San Francisco), sent out a news release and several tweets May 31 pointing out that her opponent had received "upwards of $25k" in political donations from law enforcement unions.

"You can't be in solidarity with the protesters demanding justice for George Floyd, Ahmaud Arbery, and countless murdered Black men, women, and children when you're bankrolled by the very organizations killing them," Fielder stated May 31, referring to the recent killings of African Americans. "The same peace officers you supported are sporting Blue Lives Matter masks around town RIGHT NOW and pulling the same killer knee-chokeholds on Black San Franciscans as they did on George Floyd ... Sad that it takes a re-election campaign and a national uprising to bring this back to light. Do the right thing."

As the Bay Area Reporter previously reported, between 10,000 and 30,000 people took to the streets of San Francisco Wednesday to express solidarity with the Black Lives Matter movement and express their opposition to police brutality.

Wiener was contacted by the B.A.R. late Wednesday about accepting these donations.

On Thursday morning, Wiener took to Twitter to say he will be "donating all contributions to my reelection campaign from law enforcement unions to SF & Daly City nonprofits serving at-risk youth of color."

Christopher Cadelago, a Politico reporter who used to work at the San Francisco Chronicle, tweeted that this move marks "a major reordering of political alliances."

"In California, a Democratic state senator from San Francisco is now lumping police unions in with the likes of Big Tobacco; Big Oil and PhRMA," he tweeted.

Police and other law enforcement unions have long been involved in political campaigns, particularly in races for county district attorneys. Just last fall in San Francisco, the Police Officers Association loudly — and expensively — campaigned against Chesa Boudin, who went on to win the race for district attorney.

On Monday, Boudin called upon the California State Bar to prohibit police officers' unions from donating to campaigns for a county's top prosecutor.

Wiener takes the offensive
Wiener stated on Twitter that his opponent is being hypocritical because she is receiving "campaign funds from the San Francisco Deputy Sheriff's Association" through a loophole.

"Check my filings. I never received a dime from the Deputy Sheriffs or any other LEA," she stated on Twitter, referring to law enforcement agencies. "@Scott_Wiener is gaslighting voters with intentionally misleading, illogical claims to distract from his career siding with law enforcement to oppose police reform and accountability."

In a phone call with the B.A.R., Fielder said that the connection between the deputy sheriff's union and the mailers is a tenuous one to make.

"His campaign is trying to position me as someone who benefits from the deputy sheriffs and it makes no sense whatsoever," Fielder said. "There's not a word in his comments today apologizing."

Roisin Isner, who is with the Fielder campaign, elaborated.

"It's a tangential and illogical rabbit hole," Isner said. "It's a desperate move, in my opinion."

Such transfers of funds would not be present in Fielder's filings because what is alleged by Wiener was an indirect contribution through Ronen, Haney, and Mar.

In a statement to the B.A.R. following the initial publication of this story, Wiener asserted that Fielder's claim that Wiener's charge is a stretch is, itself, disingenuous.

"The facts are the facts and it's clear — despite her pledge — that law enforcement money has benefited my opponent," Wiener stated. "I just want to know if she stands by her allies, like Supervisor Haney and Supervisor Ronen, putting thousands of dollars of Deputy Sheriff's Association's money into mailers that featured her prominently. She has yet to answer that question and I think it's important."

Connor Johnston, a gay man who was an aide to Mayor London Breed when she served as District 5 supervisor, replied to Wiener's post stating "So are @HillaryRonen and @MattHaneySF going to return the cop $$$ they took?"

Ronen's campaign for Democratic Party County Central Committee received $5,000 from the San Francisco Deputy Sheriff's Association in February, and spent $5,000 to appear on a mailer from San Francisco Social Justice Democrats, which is headquartered in Oakland.

Late Thursday Mar announced via Twitter he would donate $500 each to three local nonprofits due to receiving $1,500 in donations since 2018 from two law enforcement groups. He also pledged to no longer accept such contributions.

Haney and Ronen did not immediately respond to a request for comment.

Mandelman returned a message from the B.A.R. shortly after this story was initially published.

"I was proud to have (the deputy sheriff's) support in my DCCC race and have no intention of returning their contribution," Mandelman stated.

Updated, 6/4/20: This article was updated to include comments from Supervisors Mandelman and Mar, as well as Senator Wiener.