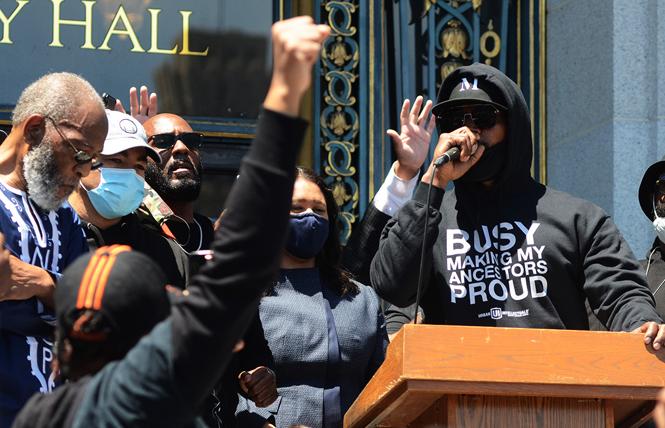 The LGBTQ community took shape in response to a history of targeted harassment by police: raids of gay bars, entrapment in cruising areas, violent responses to protest marches, failures to treat our cases seriously when we are victims of crime or murder. We just couldn't take it anymore and set out to change minds and society, and so we stand in solidarity with the outrage that the police killing of George Floyd has touched off across the country. But we are also heartbroken and angered that peaceful demonstrations have been overshadowed by vandalism and looting, thus distracting from the real issue: police brutality and the pattern of law enforcement officers' encounters with unarmed black men and women frequently ending in their deaths.

The series of recent deaths is hard to ignore and cry out for reform of policing practices involving black and brown people. The protests started last week, after George Floyd, a black man, died after a Minneapolis police officer knelt on his neck. In Louisville, Kentucky, an African American woman, Breonna Taylor, died after white plainclothes Louisville police officers kicked down the door of her apartment and shot her eight times as she slept in her bed. Before them there were Stephon Clark, Sandra Bland, Philando Castile, Oscar Grant, Mario Woods, and many more too numerous to mention or others whose cases were never publicized.

A black trans man, Tony McDade, was reportedly shot by police in Tallahassee, Florida May 27. While early reports in Mother Jones noted that McDade may have been a suspect in a fatal stabbing, eyewitnesses indicate police never tried to de-escalate the situation, the magazine reported. "Tony was a queer black American who was gunned down by law enforcement," said Gina Duncan, director of Transgender Equality for Equality Florida, a statewide LGBTQ advocacy organization. "Nothing can erase that. Talking about Tony's earlier brushes with the law should not diminish the humanity of this being a person who is now dead and certainly shouldn't diminish the fact that society failed Tony. Tony was calling out for help and society failed Tony in so many ways."

In fact, society is failing people of color in general. Law enforcement agencies across the country need a new approach to policing their communities rather than resorting to force and their guns first. In Santa Cruz, the police chief took a knee with protesters during demonstrations last Saturday. In Oakland, which has been hit hard by vandalism, a group of police officers took a knee with demonstrators Sunday. San Francisco Mayor London Breed was joined by actor Jamie Foxx on Monday for a kneel-in protest on the steps of City Hall. Although symbolic, these gestures help de-escalate the frustration of protesters and, if sincere, could be the start of a partnership for reform and a commitment to rooting out discrimination in policing practices.

Talking a step in that direction, Congresswoman Barbara Lee (D-Oakland) on Monday announced legislation to form a U.S. Commission on Truth, Racial Healing, and Transformation. The proposed legislation is supported by a broad coalition of members of Congress and will officially be introduced Thursday, June 4. In a news release, Lee noted the murder of Floyd and the current COVID-19 crisis, both of which "illustrate once again the painful and dangerous legacy that white supremacy has had in our country, and the desperate need to fully acknowledge and understand how our history of inequality continues today."

Lee is right when she notes that inequality "is at the heart of every crisis we're dealing with right now." In addition to police brutality and COVID, which has been shown to disproportionately impact African Americans, poverty excludes many families from the American Dream, Lee stated. "Only by understanding our past, and confronting the errors that still haunt us today, can we truly move forward as a people and a country."

The LGBTQ community also knows about police brutality, as many have pointed out on social media for the beginning of Pride Month. The modern LGBTQ movement started as a riot at New York City's Stonewall Inn in 1969 when queers fought a police raid of the bar. Three years earlier, transgender patrons at Compton's Cafeteria in San Francisco battled a police raid there. Numerous instances of police violence followed, such as the 1979 White Night riots protesting the lenient sentence handed down to Dan White after he assassinated supervisor Harvey Milk and mayor George Moscone in 1978. Police from Mission Station carried out the Castro Sweep in 1989, in which they rushed down Castro Street in riot gear and formation as they beat protesters and bystanders along the way. Police around the country brutalized many who protested government inaction on HIV/AIDS.

While Lee's commission faces an uncertain future in Congress, it shouldn't. Representatives and senators should welcome the chance for the country to start addressing these racial inequalities that go back to the founding of our country. Now the Band-Aid has been ripped off, our leaders must lead us in healing.