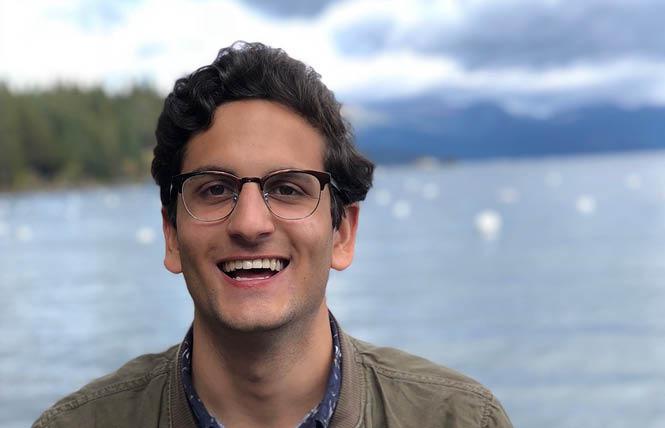 A bisexual man who co-founded a group for LGBT public transit enthusiasts has died at Zuckerberg San Francisco General Hospital after being one of two people injured in a Friday night shooting in the city's Mission district.

A hospital spokesperson confirmed to KPIX-TV that Courtney Brousseau, 22, died late Monday, May 4, after having been on life support.

Brousseau was one of two people injured by gunshots that rang out near the intersection of Guerrero and 14th streets around 8:22 p.m. Friday, May 1. The other victim, an 18-year-old male, sustained less critical injuries.

A tweet sent by Brousseau just minutes earlier — in which he wrote that eating a burrito in Mission Dolores Park made everything feel OK for a brief moment — received numerous responses of people wishing well and expressing their condolences.

I just ate a delicious burrito in Dolores park and for a brief moment everything felt okay pic.twitter.com/bTyWotvXDF— Courtney Brousseau (@cbrewsayso) May 2, 2020

About 50 to 60 bullets were exchanged in what is suspected by police to have been a drive-by gunfight. Police said they are still investigating.

"We do not have any updates to provide at this time for this active and ongoing investigation," a police spokesperson stated to the B.A.R. May 4. "We do not have an arrest directly tied to the shooting and are actively following up on leads, motives, and eyewitness statements."

Gay District 8 Supervisor Rafael Mandelman posted about the shootings on his Facebook page, before Brousseau's identity was widely known.

"The details of last night's shooting incident near Guerrero and 14th Streets are chilling and heartbreaking," Mandelman wrote Saturday. "More than fifty rounds were fired, and by the time it was over two people had been shot. One of these was a bystander who is currently in critical condition at SF General. We have been in contact with SFPD's Mission Station and an investigation into this incident is ongoing."

Mandelman told the B.A.R. May 5 that Brousseau's death is "just terribly sad."

"He was clearly a young man with tremendous promise, deeply involved in his community and beloved by many," Mandelman stated. "My heart breaks for his friends and family, and for all the life that he should have had ahead of him." 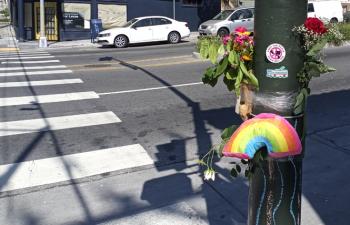 A memorial was set up in honor of Courtney Brousseau at 14th and Guerrero streets. Photo: Scott Wazlowski

High achiever
Brousseau graduated from Newbury Park High School in Ventura County, California in 2015. He was a valedictorian and the editor of the high school's newspaper, according to the Ventura County Star. The year prior, he interned at the office of Democratic former presidential candidate Massachusetts Senator Elizabeth Warren.

Brousseau went on to attend UC Berkeley, where he graduated in 2019 with degrees in economics and computer science, according to his website. He went on to work for Twitter, where he had been an associate project manager.

Brousseau was a co-organizer of Gay For Transit alongside Janice Li, a queer woman who is a member of the BART board of directors.

Gay For Transit is "a monthly SF meetup for queer folks who love public transit," according to Brousseau's website.

Jane Natoli, a trans woman who was nominated by Mayor London Breed last month to serve on the SFMTA Board of Directors, told the B.A.R. by phone May 4 that she was just getting to know Brousseau.

Natoli, who is on the San Francisco LGBT Community Center's board, helped Brousseau find meetup space for Gay For Transit in January.

"I was helping him and Janice (Li) find a location for the transit meetup," Natoli said. "They'd been hosting these events at bars and wanted something more accessible, so I connected them with the (LGBT community) center."

Natoli said that what happened was a "senseless tragedy."

"I'm obviously deeply saddened by that news. It's such a tragedy," Natoli said. "He was such a bright person with so much in front of him and he really cared about community building."

Brian Wiedenmeier, a gay man who is the executive director of the San Francisco Bicycle Coalition, also knew Brousseau.

"I do know Courtney, but given the seriousness of his condition and out of respect for his family and loved ones, I'm going to decline comment at this time," Wiedenmeier wrote to the B.A.R. via email May 4 before Brousseau died.

Emmett Coleman, a pansexual nonbinary person who is a junior at UC Berkeley, told the B.A.R. in a May 4 phone call that he knew Brousseau.

Coleman met Brousseau while the former was working in student government. He called Brousseau "incredibly ahead of the game" and said he was "very involved on campus."

Still, Coleman said he only knew one facet of Brousseau's life.

Li told the B.A.R. May 5, after Brousseau's death became widely known, that she was not taking media interviews, but shared a statement she emailed to Gay for Transit members Tuesday morning.

"Many of you have asked what you can do to support Courtney and his family at this time. I don't have an update for you right now. I know that Courtney, even at age 22, donated $50/month to 10 different organizations so if it is possible, I would encourage you to follow his generosity and donate," the email states. "I can promise you that Gay for Transit will continue and that, with time, we will find ways to remember and celebrate Courtney.

"Lastly, more than ever and during these times, I would ask something of you that I know can be very difficult, but please, please be kind to yourself. Love those around you and have compassion for those less privileged. It's what Courtney would have wanted," the email concludes.