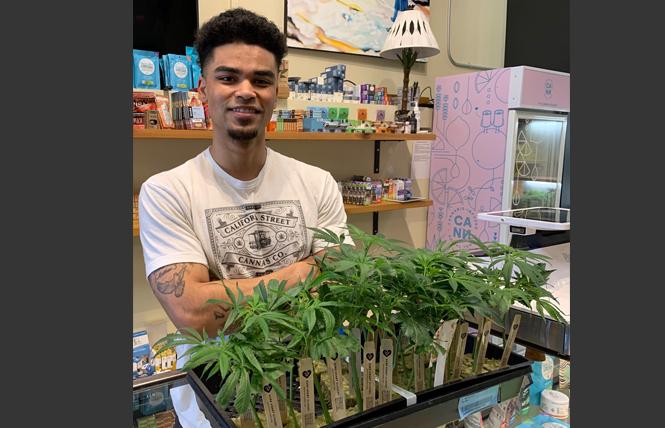 Drakari Donaldson of California Street Cannabis shows some of the starter plants, or clones, that are available at the San Francisco store. Photo: Sari Staver

Thanks to a new Nob Hill dispensary, San Franciscans can legally buy starter cannabis plants, or clones, without leaving the city.

Shortly after their opening earlier this year, Drakari Donaldson and his business partners at the California Street Cannabis Co. decided that they'd become the first cannabis store in the city to stock a variety of cannabis strains. Previously, clones were available in Oakland and on the Peninsula, but by an unlucky coincidence, those of us in San Francisco were out of luck.

The clones at California Street Cannabis are from the well-known wholesale farm Dark Heart Nursery, the leading clone maker in the Bay Area.

"I've got one growing at home in the window of my studio apartment down the street," said Donaldson when the Bay Area Reporter recently met him at the shop he owns with business partners Duncan Ley and Benjamin Bleiman, who is president of the San Francisco Entertainment Commission and founder of the SF Bar Owner Alliance. All are allies.

Donaldson, 24, had worked with the men for several years at their bar and restaurant business and when recreational cannabis was legalized, the three spent two years pushing their application through the city regulatory process before they were able to open.

"So far, so good," said Donaldson, who takes turns staffing the store with Ley and Bleiman.

When physical distancing was required by the city as part of the stay-at-home order due to the novel coronavirus outbreak in mid-March, they quickly rearranged procedures, enabling only a few customers inside at a time.

Since California voters legalized the adult use of cannabis in 2016, it has been impossible to find clones for sale in the city. Dispensaries apparently decided that it was too time consuming to keep live plants in stock. The closest place to buy plants has been Harborside in Oakland, which also carries items supplied by Dark Heart.

I'd given up on finding them locally, until a friend said he saw a tray of "gorgeous plants" for sale at a store at California and Hyde streets. I stopped at Cliff's Variety for soil and plastic pots and was ready to garden in less than an hour. Dispensaries, hardware stores, and garden shops are open because they are considered essential businesses under the public health order.

While Donaldson proudly showed me the picture of his healthy plant in his window, I've only had experience growing them outdoors, which I think will make your life much easier. Mid-spring is the sweet spot for planting in the Bay Area, and with most people stuck at home, this is a perfect time to start a new project. All you need is a small space on a porch, deck, or yard that gets some sun each day, the more the better.

The dispensary will allow you to purchase up to six plants per day, the number the city says each resident over age 18 is legally allowed to grow. Plants are priced between $16-$38, depending on the strain. California Street Cannabis also carries a $100 "auto-flowering teen" for beginners who want a jump-start with a plant that is ready to bloom.

Growing your plant is relatively straightforward. When you buy the clone it's embedded in a square inch cube of rock wool, which can be placed in soil in a small plastic container. As it grows and becomes root bound, you can transplant it into a larger container or into the ground. Detailed instructions on growing can be found at the website of local pot guru,

California Street Cannabis typically carries at least several different strains at most times, but it's best to call before visiting to be sure they have stock on hand.

Once you find out which strains the store has, you can read about them on the Dark Heart website at www.darkheartnursery.com

Webinar highlights COVID issues
People working in the cannabis industry, as well as those in the long line of applicants hoping to get a license to open a business, have been hit particularly hard by the coronavirus pandemic, according to an hourlong webinar May 1.

Sponsored by the city's Office of Cannabis, which is open for business although some staffers have temporarily joined the city's Department of Emergency Management, the webinar addressed questions submitted by people in the industry.

Federal stimulus funds are helping "most everyone, except the cannabis industry," said state Treasurer Fiona Ma (D), a San Franciscan who previously served in the state Assembly as well as the Board of Supervisors.

When the Assembly goes back into session this week, the governing body will have a "limited policy agenda," said Wiener. (The state Senate is due back in session next week.) With a reduction in the number of bills introduced, Wiener expressed skepticism that the Legislature will deal with the tax reductions many in the industry say will be necessary to keep them above water.