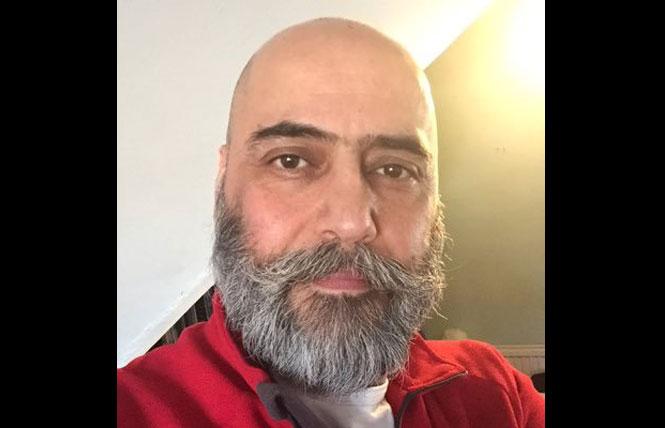 Award-winning Iranian-born gay photojournalist Shahin Shahablou died in a London hospital April 15 of complications from COVID-19, the illness caused by the novel coronavirus. He was 56.

Mr. Shahablou, who had mild asthma and a leaky heart valve, had been in intensive care on a ventilator for 19 days.

He had been sick and in and out of the hospital since December when a cough developed and evolved into a chest infection in January. Doctors finally tested him for the coronavirus in March, reported BuzzFeed News.

The freelance photojournalist shot photos for Amnesty International and other clients, the outlet reported.

Prior to moving to Britain as a refugee, Mr. Shahablou was a well-respected photographer for two decades, exhibiting his works in solo shows in Iran and India. He was a board member of the Iranian Photojournalists Association and taught photography.

Mr. Shahablou was known for "capturing the hidden essence of his subjects," and often were people who were overlooked, reported BuzzFeed. Many of his subjects were from the LGBT community.

Homosexuality has been illegal and punishable by death since the Iranian Revolution in 1979. Shahablou was 15 years old at the time.

In the 1980s, he was imprisoned for more than two years for being a member of a dissident group.

Mr. Shahablou settled in London, becoming a fixture in the city's gay scene, in 2011.

"He really wanted someone that he could share his life with," Kevin Lismore, who started dating Shahablou a few months ago, told BuzzFeed. "He said he would never be able to find a partner there in Iran, that it would just be sex. But he wanted a partner for life."

Mr. Shahablou is survived by five sisters and one brother who live in Tehran.

Zhang Peiyi, who is identified as "DeDe" in the complaint and lives in Shanghai, filed for custody and child support for her biological child and visitation rights with the other child that she raised with her ex-partner.

The case was filed in the Dinghai District People's Court of Zhoushan City in the eastern province of Zhejiang at the end of 2019.

The court accepted the case March 17.

Zhang filed the case after her ex-partner, whom she broke up with in November 2019, absconded with the couple's two toddlers to an unknown location and cut off communication, reported the Thomson Reuters Foundation. This happened after police reportedly warned Zhang to "cease her so-called harassment of her wife and children," according to an April 18 LGBT Rights Advocacy China post on Facebook about the case.

The post was written by Soda and edited by FanFan at the organization, who were only identified by these names. The post was translated by Adam Robbins.

"Even if I can find them, I won't be able to see them," Zhang told Reuters. "I thought, who else can help me? I could only find a lawyer."

Zhang's case is unique in Chinese courts. The children's biology is not only intricately linked to both mothers, but the children were born in the United States and raised in China following the couple's return to the country in July 2017.

The couple, who met in 2009, utilized reproductive technologies to become pregnant in Los Angeles in 2017, according to the organization's post about the case. Zhang's partner provided her eggs for the embryos. Each mother carried a separate embryo to full term, giving birth to a boy and a girl.

The couple were married in Los Angeles in 2016, reported the Global Times.

Zhang can claim being the birth parent to one child, but her partner can claim she is the blood parent to both children.

There is no existing law allowing Zhang to claim parental rights over the children, even the one to whom she gave birth, despite laws traditionally recognizing the birth parent.

The lawyers representing both parties are focused on the fact that the children's rights need maximum protection, according to the post.

Gao Mingyue, a lawyer from Guantao Zhongmao, a Shanghai law firm, pointed out that "although same-sex marriage has not yet been legalized in China, the determination of identity in the partnership cannot damage the legitimate rights and interests of children," according to the post about the case.

Since the case has international ties, Gao urged the court to follow "the principle of 'the best interests of the child' established by the United Nations' Convention on the Rights of the Child and maximize the protection of the legitimate rights and interests of children." Gao is also drawing upon other countries' same-sex couple parental rights and reproductive technology cases.

The lack of legal protections isn't stopping same-sex couples who are choosing to have families, nor the more than 100 assistive reproductive companies targeting queer couples who want families, Yang added.

This isn't the first custody battle between same-sex couples in China. Previously, the cases have been settled out of court, Yang told Reuters.

Advocates said that the case exposes the legal pitfalls of same-sex families in China, calling for the urgent need for legal protection of LGBT families.

Zhang, who is a marriage equality advocate, told Reuters that she sees family rights stemming from the right for same-sex marriage.

"The focal point is how can you determine who is a child's mother. But if you consider that there are two mothers, then it will return to the issue of same-sex marriage," she said.

Su Shan, a software engineer in Taipei, Taiwan's capital city, who was raising her twin sons with her partner, told the Associated Press in 2016, that when marriage equality came to Taiwan her family would be legally protected. Either partner could make legal, medical, and educational decisions for their children.

Taiwan became the first country in Asia to legalize same-sex marriage in 2019.

Hearings for Zhang's case have yet to begin. The court is attempting mediation before litigation, according to the post.