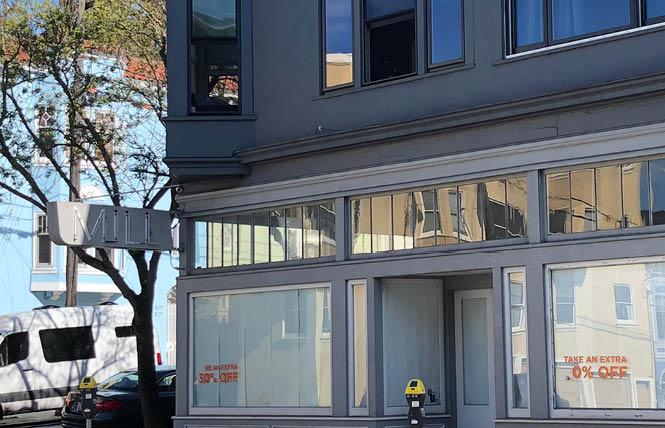 The San Francisco Planning Commission has given a green light to the first cannabis retail store in Noe Valley, The Mill, on 24th Street between Church and Chattanooga. Photo: Matthew S. Bajko

Residents of San Francisco's Noe Valley neighborhood will no longer need to travel to the Mission or Castro districts in order to buy marijuana now that city officials have cleared the way for the first pot store to open in their area.

The planning commission unanimously voted 6-0 April 23 to grant a permit to The Mill, a cannabis retail store set to open at 3751 24th Street between Church and Chattanooga streets. It is near the J-Church Muni subway line stop at Church and 24th streets.

Sharon Cassidy, who has owned the building 15 years, and her business partner, Alexander Solis, who was certified as an equity applicant by the city's cannabis office, plan to open the business in the retail space that had housed the women's clothing store of the same name. Since the signage for the shop, which closed in 2018, still exists on the facade of the building, they are repurposing the name for the cannabis retail store.

It is unclear, though, when they will be able to open their doors. While the city has deemed marijuana retailers to be essential businesses during the novel coronavirus outbreak, and thus can remain operating, it has also banned most construction projects unless they involve affordable housing. A remodel of The Mill's 932 square foot retail space will be needed prior to it welcoming its first customers.

Cassidy did not immediately respond Thursday to a question about when she expects to open.

The plan is for the business to operate seven days a week from 10 a.m. to 10 p.m. There will be two security guards working when the store is open, and patrons will not be allowed to use or consume marijuana inside the store or near the premises.

"I will be directly accountable for anything that occurs in or around the property," noted Cassidy, a real estate agent and second-generation San Franciscan, during the planning commission meeting.

Solis, whose grandmother is originally from Nicaragua, grew up nearby on 27th Street and has worked as a bartender and server at various restaurants around the city.

"We have been trying to get this since March 2018," he told the oversight body during its virtual meeting.

A nearby resident voiced concerns during the meeting about the business being a draw for crime at night since it is in a residential neighborhood that doesn't see much foot traffic after 8 p.m. most evenings. The only other member of the public who called into the meeting voiced his support to seeing Noe Valley finally have its own cannabis store.

The business had overwhelming support heading into the meeting, with close to 40 letters of endorsement from residents and business owners nearby. Just three people had expressed concerns about the business, in particular it attracting young people.

No one under the age of 21 will be allowed into the store, which will feature a security checkpoint at the main entry point to prevent minors from gaining entrance. Display cases and the sales areas will be setback from the storefront's floor area nearest the sidewalk so there will be limited visibility of the pot products to pedestrian onlookers.

If, in the future, the pot store decides to establish a smoking or vaporizing room at the site then it would need to go through a public permit review process in order to do so.