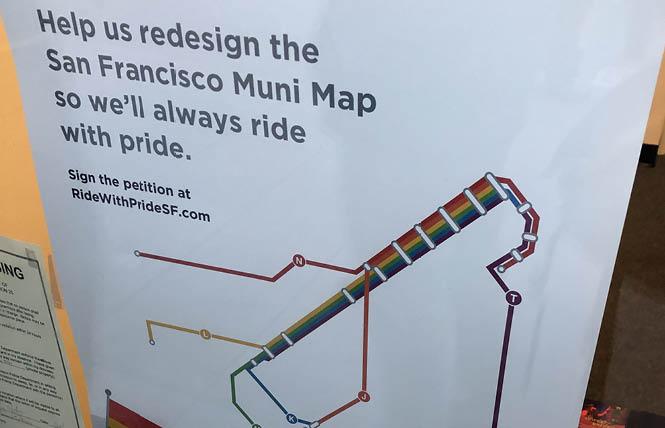 Equality California's design for the San Francisco Muni Metro lines, seen in a Castro storefront, shows them in the colors of the rainbow flag. Photo: Matthew S. Bajko

A campaign is underway to have the San Francisco Municipal Transportation Agency update its map for the city's Muni subway lines so they resemble the colors of the Pride flag.

Equality California, the statewide LGBT advocacy organization, first floated the idea during Pride weekend of 2018. Based on the positive response it received, EQCA is ramping up its push for the proposal during this year's Pride events.

It released a video online Tuesday, June 25, that details how the revised map would look like, created pro bono by ad agency DDB SF. And it will be asking people who stop by its booth during the Pride celebration to sign on to the campaign dubbed "Ride With Pride SF."

"Ultimately, the goal is to have Muni redesign the map so it serves as a permanent testament to Pride," said EQCA spokesman Samuel Garrett-Pate. "The colors would reflect the colors of the Pride flag in order."

For the San Francisco Pride parade and celebration in 1978, at the request of the late gay supervisor Harvey Milk, friends Gilbert Baker, Lynn Segerblom and James McNamara created the first rainbow flags. Following its debut, Baker redesigned the rainbow flag into the six-striped version that is now a global symbol of LGBT Pride.

As it turns out, Muni already uses all but one of the colors of the rainbow flag to designate five of its six subway lines on the maps seen posted inside the train cars and in subway stations. But the colors do not match how they are assembled on the rainbow flag.

EQCA would like SFMTA to redesign the maps so they do mirror the colors of the Pride flag when all of the lines run together along Market Street. The city's main thoroughfare is also where the Pride parade route is nowadays.

In order to achieve the effect on the map, the lines would no longer be listed in alphabetical order and several would have new colors assigned to them. Based on a mockup map produced by EQCA, the N-Judah line (now blue) would be demarcated in red, while the J-Church line would remain orange.

Paul Rose, a spokesman for the SFMTA, has yet to respond to the Bay Area Reporter's questions about the push to alter the agency's Muni subway maps and how much doing so would cost. They will need to be updated when the new Central Subway line comes onboard; it is slated to open to the public sometime in 2020.

The 1.7-mile underground line will run through the South of Market neighborhood and into Chinatown. Since it will make a turn through Union Square, not too far from the Compton's Transgender Cultural District, perhaps it could be designated the colors of the transgender flag on the new Muni maps.

EQCA's map mockup doesn't include the new subway line on it. There is already talk of extending it into North Beach, home to some of the city's first LGBT bars and restaurants, in particular former drag hotspots like the Black Cat and Finocchio's.

With the ongoing issues regarding Muni's reliability, expansion plans, and infrastructure needs, EQCA doesn't expect its map request will be at the top of the transit agency's priority list, noted Garrett-Pate. It doesn't expect anything to happen this year, he added, and sees the map redesign campaign as a years-long effort.

"Obviously, Muni has priorities that they need to deal with right now to make sure everyone is able to ride comfortably and get to their destinations on time. We recognize this is not something that is going to happen over night," said Garrett-Pate. "At this point we are trying to raise awareness about this concept, build public support for it, and ultimately, we would approach the city and ask them to take this on."

Panel tasked with fixing Muni
In order to address the myriad issues Muni is facing, San Francisco Mayor London Breed and Supervisors Rafael Mandelman and Aaron Peskin last week announced the formation of an oversight panel for evaluating the transit agency's performance. The Transit Performance Working Group is being tasked with making suggestions for how Muni can improve service for riders.

The group is being co-chaired by Ed Harrington, the city's former controller, and Gwyneth Borden, the incoming chair of the SFMTA Board of Directors. Its formation coincides with the pending departure of SFMTA Director of Transportation Ed Reiskin, who will be stepping down in August, and the search to find his replacement.

"Muni has to work for everyone — for people commuting to work, for people getting to appointments, for people who are just trying to live their lives," stated Breed, who made her displeasure about Muni's shortcomings under Reiskin's leadership known just weeks after becoming mayor last July. "It needs to be reliable, safe, and efficient. That requires us continuing to invest in new trains and buses, but also looking at the system as a whole to see how we can make improvements."

I hear every day from constituents frustrated with our inability to provide reliable public transit in SF. The system isn't working, and I am committed to doing everything I can to make the fixes my district and our city needs. Read more: https://t.co/ryQkiTnTjF— Rafael Mandelman (@RafaelMandelman) June 11, 2019

Mandelman, the lone gay member on the Board of Supervisors, is working with Noe Valley residents to address longstanding complaints about the sluggish service of the J-Church line that runs through much of his district on surface streets. Complaints about the city's entire transit system have been a major concern voiced by his constituents since he also took office last July.

"Since taking office one year ago, I have heard nearly every day from constituents sharing harrowing tales of their experiences on Muni," said Mandelman. "In this 20th anniversary year since Proposition E established the SFMTA and with a change of leadership on the way, we have an opportunity and obligation to evaluate this agency's track record and current performance and offer its new leadership a roadmap to fixing Muni and delivering San Franciscans the 21st century world-class transit system they deserve."

As for Peskin, the current chair of the San Francisco County Transportation Authority, he called the working group "long overdue" and expects it will come up with "a restructuring that will ensure SFMTA delivers better, faster and more reliable public transportation for the hundreds of millions of riders annually who depend on our system."

The group has been given a deadline of January to deliver its report.