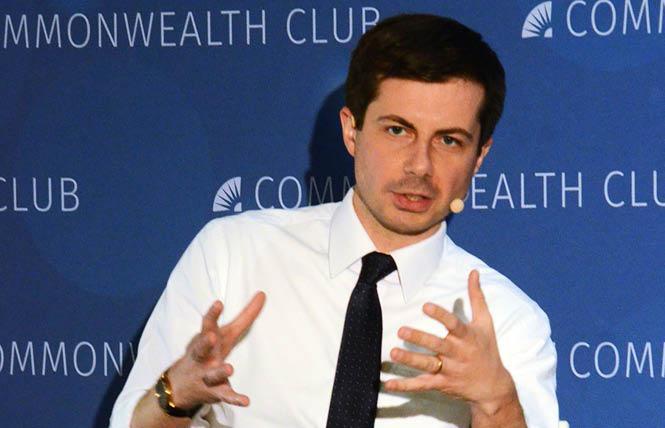 Two California-based LGBT groups have come out with early endorsements of gay Democratic presidential candidate Pete Buttigieg ahead of the state's March 3, 2020 primary.

"Why we endorsed him is we feel, number one, he is a new voice. And we are proud he is a vet," said Nicole Murray Ramirez, a gay man and San Diego human rights commissioner who is active with both groups. "He is a new face and he is just, I would say, genuine."

Buttigieg, 37, (pronounced Boot-edge-edge) is a Rhodes scholar and a Navy Reserve veteran who served in Afghanistan. He came out in 2015 while in office and was running for re-election and last year married his husband, Chasten. The couple have been a ubiquitous media presence in recent weeks as Buttigieg seeks to become the first out LGBT presidential nominee of either of the country's two main political parties.

In a letter sent out last week, Ramirez and Nathan Page, a San Francisco resident who is the national executive director of the civil rights group, explained why the organization decided to "heartily commit" to helping elect Buttigieg as the country's 46th president.

"Pete Buttigieg exudes decency, a grounding in history, optimism, a sophisticated grasp of the world and of the dangers of bigotry, and a generosity of spirit," they wrote. "The Democratic field is full of people with these traits, but Pete possesses them to an uncommon degree, and just as importantly, has a gift for communicating them."

Ramirez, a longtime political columnist for gay newspapers in his hometown, told the Bay Area Reporter that members of both of the LGBT groups have been impressed by the political newcomer's poise, presence, and pragmatism. His rising in the polls — a recent CNN poll had Buttigieg beating President Donald Trump in next year's general election 47% to 44% — and his impressive fundraising totals have also caught the attention of many LGBT voters.

His being unafraid to talk about being a person of faith and calling out anti-gay religious leaders and politicians like Vice President Mike Pence has also garnered Buttigieg a wellspring of support within LGBT circles. It has riled up the religious right, with the evangelical leader and Trump supporter Franklin Graham saying that Buttigieg needed to repent for his being gay.

Thursday, May 9, Buttigieg will be in Los Angeles raising money. And he will be barnstorming through San Francisco Friday, May 10, for a series of private $1,000-a-person get-togethers beginning with a breakfast gathering and culminating with an evening champagne and dessert reception. The one event in the early evening with tickets priced at $100 or less is sold out at the inexpensive levels.

But as the Political Notes column noted in March when Buttigieg came to San Francisco for a sold-out conversation hosted by the Commonwealth Club, it remains to be seen if Buttigieg can win over Democratic primary voters in the state, especially with the state's junior U.S. senator, Kamala Harris, also seeking the party's presidential nominee. Both are expected to be in town at the end of May when the California Democratic Party holds its state convention at the city's Moscone Convention Center. Most of the 21 and counting declared Democratic presidential candidates are expected to be in attendance to curry support from the delegates and state party leaders.

"My message to the other LGBT groups is if America is taking Mayor Pete seriously, we need to," said Ramirez.

SF LGBT Dem clubs, EQCA waiting to endorse
As for San Francisco's two main LGBT Democratic clubs and the statewide LGBT advocacy organization Equality California, it remains to be seen if Buttigieg can win endorsements from the trio of groups. None are planning to early endorse in the presidential contest.

Gina Simi, co-chair of the Alice B. Toklas LGBT Democratic Club, told the B.A.R. that the more moderate political group has yet to discuss endorsing in the presidential race. Nor could she say if Buttigieg would have a leg up due to his being an out candidate.

"Honestly, it's too early to say — we haven't had any discussion about it yet. And if there's one thing I've learned as co-chair, it's to never predict how the club will endorse," she wrote in an emailed reply.

"I suppose it is possible. But his policy positions (at least the ones that we know of) are disturbing," wrote Bard. "Especially not allowing incarcerated people to vote. I doubt the membership will like that."

While Milk has not set an exact date for its endorsement in the presidential race, Bard said it is likely to do so in November or December.

As for EQCA, it is planning to hold a formal endorsement process this year, unlike in the 2016 presidential race when it gave an early endorsement to Hillary Clinton in March 2015 before she had even officially declared her candidacy. The B.A.R.'s editorial board criticized the move as "irrelevant" and "a weak strategy."

This time around EQCA's political action committee is planning to send candidates a formal questionnaire prior to deciding on an endorsement. The PAC intends to take all of the organization's endorsement criteria for candidates into account, such as their viability, LGBTQ status, and the depth of their work on LGBTQ issues.

"We will conduct a formal endorsement process that will require candidates seeking our endorsement complete a written questionnaire and participate in interviews with our PAC," EQCA Executive Director Rick Zbur told the B.A.R. "Although subject to change, we plan to conduct our process this fall."

Many California LGBTQ donors are supporting both Harris and Buttigieg, so EQCA leaders told the B.A.R. that it was "too early for speculation or assumptions" on what endorsement it was likely to make. In recent state elections the PAC has dual endorsed in several races, so there is a chance of seeing it make a similar decision regarding the presidential election.

All Pride attendees, regardless of sexual orientation, will be invited to "Pin a Donkey on a Democrat" at the committee's booth to select their nonbinding choice for the Democratic nominee. According to the group, voters will attach a rainbow-colored donkey sticker under the photo of their preferred candidate.

It plans to include all announced Democratic candidates on a wall of poster boards, along with brief biographies, at the booth. It will also use the occasion to register people to vote.

The straw poll "is just for fun as a non-scientific poll, but it has another, more serious purpose," stated its creator, Santa Cruz Democratic organizer and longtime gay activist Tony Russomanno, who was a reporter for the CBS affiliate in San Francisco. "We're trying to increase knowledge of the candidates and their positions, and the dire consequences of another four years of President Trump."

The Santa Cruz Pride exhibition area will be located at Cathcart and Cedar streets and will be open from noon to 4 p.m. that Sunday.