Guest Opinion: Why I support Buttigieg for president 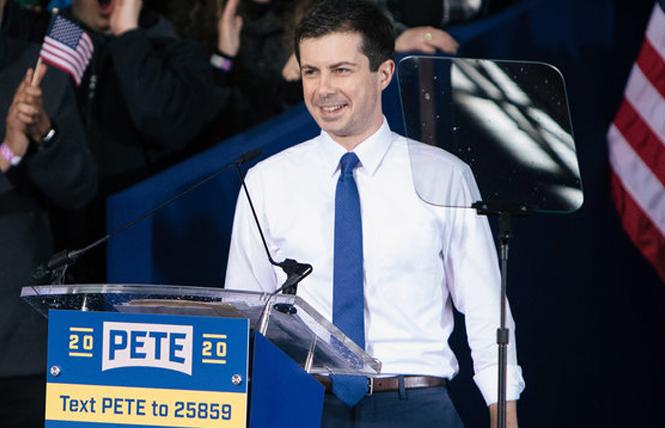 I had heard of Pete Buttigieg before he started running for president in February. Former President Barack Obama was asked a couple of years ago to name the future leaders of the Democratic Party. He answered with senator and former vice presidential nominee Tim Kaine (Virginia), California Senator Kamala Harris, and "the Mayor of South Bend." He couldn't remember his name. Buttigieg ran for chair of the Democratic National Committee in January 2017 where he impressed many party leaders but eventually dropped out as Tom Perez was elected.

This massive Democratic field (19 and counting) running for president in 2020 is like a yearlong Christmas for political junkies like myself. I tend to like mayors and governors for president who have a record of doing things since I am a former city councilman. I started to look at candidates as they announced and started to give small amounts to people I liked. I donated funds to former Housing and Urban Development secretary Julian Castro and Minnesota Senator Amy Klobuchar.

Then, Buttigieg announced his exploratory committee. I gave him money right away, thinking that a gay candidate should make the Democratic debate stages in June (candidates need 65,000 donors). As he began making the rounds of cable shows and speaking in early primary states, he continued to impress me. Smart and articulate, but also nuanced, he does not lecture to voters in a law professor way (Obama, Massachusetts Senator Elizabeth Warren) or like a prosecutor (Harris). I hosted some friends for his CNN town hall in mid-March — he was very impressive and all my friends became fans.

In 2007-08, many African American voters were wary of supporting Obama, worried that voters would not support an African American with a funny name. I wondered whether America was ready for an openly gay candidate with a funny name and a husband. That changed when the Buttigieg campaign announced it had raised $7 million from over 150,000 donors at the end of March. He outraised two governors (Jay Inslee, John Hickenlooper) and three senators (Kirsten Gillibrand, Cory Booker, and Klobuchar).

About a week before Buttigieg's formal April 14 announcement, I decided to use some Southwest Air miles and head to South Bend, Indiana. South Bend is two hours from Chicago. I traveled from Northside Chicago through rural Indiana and Gary. This area is so industrial — many miles of train tracks. South Bend reminded me of Stockton or Fresno — some cool historic buildings downtown but also empty land and parking lots. While Bay Area residents complain about traffic and new housing, many parts of the country could use new jobs and residents.

April rain showers decided to interrupt the Buttigieg event so the campaign moved it from the renovated riverfront to the infamous former Studebaker car plant. The massive facility is filling with new businesses but the campaign was able to use part of the building. The crowds were big despite the constant rain and cold — 4,000 made it inside and 1,500 watched on a big screen outside. The event was great, although the three mayors who spoke before Buttigieg were a little long (shout out to California's own West Sacramento Mayor Christopher Cabaldon, a gay man). I was happy to be able to attend a historic day for the LGBT community — a gay elected official declaring for president and kissing his husband on national TV.

So here is my case for Buttigieg for president:

He's a veteran of the U.S. Navy. He would be the first veteran as commander in chief since George H.W. Bush. Buttigieg didn't have "bone spurs," as Trump claimed to avoid the military draft, and volunteered for service, taking a leave of absence as mayor. I was struck at his kickoff rally that they recited the Pledge of Alliance and sang the national anthem.

He's from the industrial Midwest. That is exactly where we need to attract former Obama voters, back in Wisconsin, Pennsylvania, and Michigan.

He has a record of success in South Bend.

He fixed or tore down 1,000 abandoned houses while also spending $1 million to help local homeowners to fix up homes.

He raised $60 million for the downtown river project and local parks.

Led a downtown revitalization, which brought $100 billion of private investment to downtown South Bend. The city is growing again after years of population loss.

He spent $2.3 million for lead abatement in homes.

He is the first LGBT person who is a serious candidate for president. I think he deserves the support of the LGBT community.

Can Buttigieg beat 18-plus other Democrats and beat the worst president in U.S. history? He would need to beat nationally known candidates like Warren, Bernie Sanders, and Joe Biden. While Trump is an embarrassment as president, he is a great campaigner, as Hillary Clinton and many impressive GOP primary candidates discovered. Many Democrats are desperate to beat Trump and the Bay Area will go into a massive depression if Trump gets re-elected on November 3, 2020.

Buttigieg is worth consideration and your support.

Kevin Dowling is a lifelong Bay Area resident and served as a Hayward City Councilman from 1998-2010.