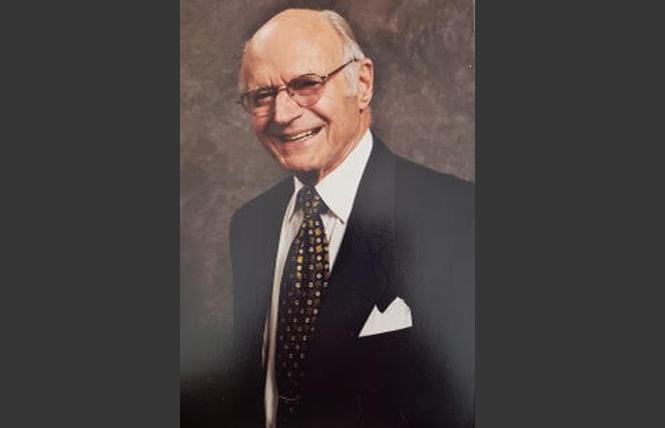 November 23, 1920 — March 13, 2019
Gordon Reeve Gould, 98, passed quietly in his sleep March 13, 2019. He is survived by children Victor Gould and Diana Gould Bonyhadi; grandchildren Benjamin, Philip, and Elsa Bonyhadi; and numerous cousins and dear friends. Reeve, as he was known, was born and raised in San Diego, surrounded by an extensive and loving family.

He attended Francis Parker School, San Diego State University, and UC Berkeley School of Architecture, where he met his wife of 25 years, Nancy Evelyn Lawson — also of San Diego — while living in International House. Reeve later married Charles Kulke, who died in 1993; they were out to the world, and Reeve lived as a gay man for the rest of his life. He was loyal to his friends to the last.

Reeve's incredible eye for detail, beauty, and elegance was manifest in all he touched, from his beautiful home in the Berkeley Hills to the many private homes and public buildings he designed throughout the Bay Area. He was committed to architectural preservation. A lover of the arts, Reeve was a lifelong supporter of San Francisco and Oakland ballets, San Francisco Opera, San Francisco and Berkeley symphonies, San Francisco and Cal performances. He was a founding board member of the Oakland Museum of California and served on the boards of many of these cultural arts institutions.

As a naval communications officer in the Pacific theater in World War II, Reeve was on the USS Missouri for the signing of the Treaty of Surrender in Tokyo Bay. Always dedicated to international peace and understanding, he served on the board of International House and was a proud Rotarian for 60 years.

Reeve will be remembered for his elegance and kindness. A true bon vivant, he dressed impeccably, knew the best restaurants in town, drove the nicest cars. Various celebrities rode atop his red Jaguar convertible in San Francisco Pride parades. He was a consummate and gracious host. We will miss his warm, sweet smile. Donations may be made to Rotary Foundation International, Oakland Museum, or UC Berkeley International House. Memorial arrangements are pending.