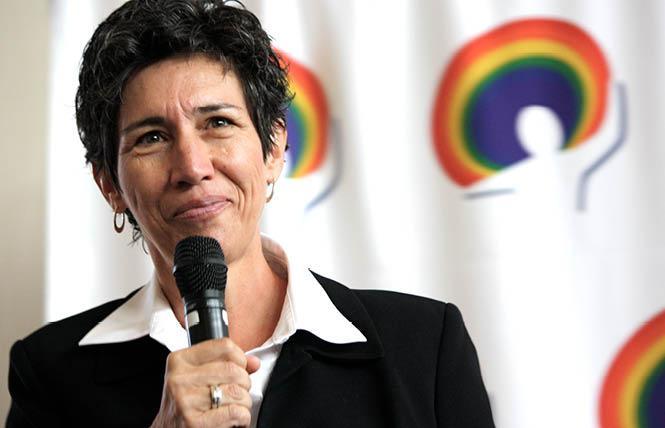 Lesbian state Assemblywoman Susan Talamantes Eggman will run for state Senate in 2020, boosting the likelihood that the California Legislative LGBT Caucus will maintain its current membership of seven or see it increase in December next year.

The Democratic lawmaker from Stockton announced her decision Friday during a panel discussion with her fellow out lawmakers at the state's first LGBT Leadership Summit co-hosted by the caucus and statewide LGBT advocacy group Equality California.

"Now I am running for state Senate. I wanted you to be the first to hear," said Eggman, who represents the 13th Assembly District and was the first out state legislator elected in the Central Valley.

"The Senate is in desperate need of a lesbian social worker," he said, referring to Eggman's professional career prior to entering politics. "I can't wait to have Susan over in the Senate, so it is going to be fantastic."

The decision to run for higher office is a reversal for Eggman, now in her fourth Assembly term, as she had told the Bay Area Reporter in January that she would not run for the 5th Senate District. Lesbian state Senator Cathleen Galgiani (D-Stockton) is termed out of her seat next year and this week pulled papers to potentially run for state controller in 2022 when Betty Yee is termed out of office.

Eggman last year had formed a campaign committee for a state Senate run in hopes of succeeding Galgiani and becoming the first LGBT woman of color elected to the Legislature's upper chamber. But she had told the B.A.R. in January that she planned to run for re-election to her Assembly seat next year due to her seniority there.

Due to term limits Eggman would only be allowed to serve one four-year term in the Senate, whereas in the Assembly she potentially could serve through 2024 before being termed out.

"I am not running for state Senate. I want to stay in the Assembly," Eggman had said.

Yet, without her vying for the open Senate seat, it was likely no LGBT person would enter the race. Thus, it is unclear if an LGBT person will run to succeed Eggman in the Assembly.

In an interview, Eggman said she had initially shelved her plans to run for state Senate, which will be a contested race, due to her wife, Renee Hall, facing serious health issues. In May 2017 Hall had surgery to remove a tumor on her spine.

With Hall's health improved, and continued calls from within her community that she run for the Senate seat, Eggman allowed her name to be included in a recent poll about the race. With her numbers "very strong," she said, and the blessing from her wife, she decided to jump into the race. Republican San Joaquin Supervisor Bob Elliott and Modesto City Councilman Mani Grewal, a Democrat, have both pulled papers to seek the Senate seat.

"Over the last two months, as I have been out talking to people, I have received overwhelmingly support to run for the seat," said Eggman, who first ran for Stockton City Council in 2006 and then for Assembly in 2012.

In addition to being in elected office in San Joaquin County, Eggman grew up in Stanislaus County, which is also covered in the Senate district. Also, next year's March 3 primary happens to fall on her birthday, when she will turn 59.

While she will only have one term in the Senate, Eggman said she sees it as giving her a powerful platform to push two major projects she has been working on in the Assembly: establishing a state university campus in Stockton and building a stronger rail connection between the Central Valley and Bay Area.

As the B.A.R. has previously noted the Legislative LGBT Caucus saw its membership slip from a high of eight members to now seven due to gay former state Senator Ricardo Lara (D-Bell Gardens) taking his oath of office as state insurance commissioner in January. Several other caucus members will depart next year, raising concerns about ensuring new LGBT lawmakers are elected in the next two years and the decision to hold the summit for local out elected officials interested in serving in the Legislature.

José Luis Solache, a gay Lynwood city councilman currently serving as mayor, is running to serve out Lara's term through 2020 in the March 26 special primary election. He is vying to be one of two candidates to make it into the runoff election and took time out of campaigning to attend the summit.

Another summit attendee was gay former Assemblyman John Laird (D-Santa Cruz), who is running to succeed state Senator Bill Monning (D-Carmel) in 2020. Monning is termed out of his 17th Senate District seat along the Central Coast.

And in San Diego, gay City Councilman Chris Ward is running to succeed gay Assemblyman Todd Gloria (D-San Diego), who has opted to run for mayor of his city next year rather than seek re-election to his 78th Assembly District seat. An out legislator has long held Gloria's seat.

Also present at the gathering was gay former Santa Clara County supervisor Ken Yeager, who announced this week he would not run for state Senate next year. Instead, he is the new executive director of the BAYMEC Community Foundation and may seek legislative office in the future.

Both lesbian state Senate President pro Tempore Toni Atkins (D-San Diego) and Wiener will run for re-election next year, as will gay Assemblyman Evan Low (D-Campbell) and lesbian Assemblywoman Sabrina Cervantes (D-Corona). Of the four, Cervantes faces the likeliest chance of being opposed by a strong Republican opponent. The GOP targeted her last year, but she was able to win a second term.

Updated, 3/15/19: This article has been updated to include comments from Assemblywoman Eggman.