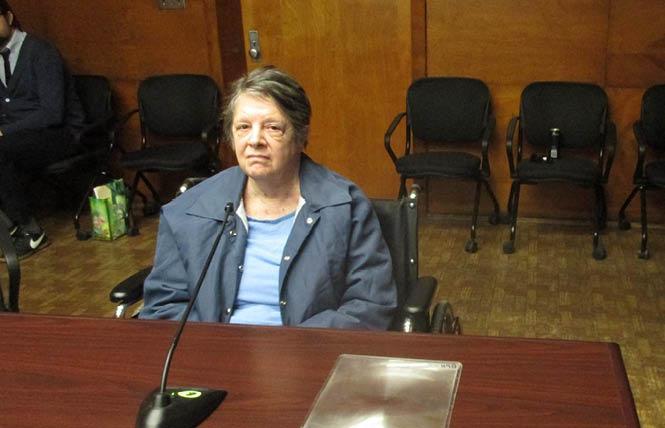 Marjorie Knoller sits at a table during her parole hearing Thursday at the California Institution for Women in Corona. Photo: Ed Walsh

Those who prosecuted Marjorie Knoller in the 2001 dog-mauling death of lesbian Diane Whipple say a state board's decision last week to deny parole to her is justice.

The February 7 decision by the state parole board came at the conclusion of an emotional two and a half hour hearing that included statements from Sharon Smith, who was Whipple's partner at the time of her death, as well as Whipple's brother, Colin Kelly. But the most stunning statements came from Knoller herself, who at first seemed to argue for her parole but then later said she was not ready for it.

The Bay Area Reporter was the only news agency to send a reporter to cover the hearing. At the proceeding, the parole board disclosed Knoller's prison record included a misdemeanor assault conviction for kicking and biting a guard while she was undergoing medical treatment.

Jim Hammer, a gay man who was the lead prosecutor in the case in 2002, told the B.A.R. this week that the tragedy of Whipple's death is only made worse by Knoller still not taking responsibility for her actions.

"I would have hoped that at some point, she would have accepted responsibility," said Hammer, who is now in private practice. "She could have stopped this."

Last Friday, a day after the hearing, the second prosecutor in the 2002 case, Kimberly Guilfoyle, tweeted: "Great news out of California."

"Marjorie Knoller, who I helped convict for 2nd degree murder in 2001 for letting her dog murder her neighbor, was denied parole," she wrote. "Justice served."

After the trial, Guilfoyle eventually went on to work as a Fox News host but resigned last year and currently is the vice chairwoman of America First Policies, a pro-Trump super PAC. She is dating Donald Trump Jr.

Smith said this week that she was still processing the hearing, which she appeared at via a video link from the San Francisco District Attorney's office.

"I just felt like I was hit by a bus," Smith told the B.A.R. in a phone interview Tuesday, reflecting on her feeling after the hearing last week.

Smith said she was advised to talk in the hearing about the impact the crime had on her and her relationships but when it came to her turn, she spoke extemporaneously.

"I decided I am not going to give her that power," Smith said.

Smith said that Knoller's statement that she wasn't ready for parole may have been the most stunning and surprising thing that she heard at the hearing. Smith added that she didn't believe Knoller would ever change and admit responsibility for what happened.

The parole hearing was held at the California Institution for Women in Corona, in San Bernardino County, east of Los Angeles. Smith attended via a video link from the San Francisco District Attorney's office. Kelly and his wife, Cayce Kelly, were in attendance and seated behind Knoller. Smith could be seen in the video display wiping tears from her face starting at the point in the hearing where Knoller described the events leading to Whipple's death. Kelly and his wife were also in tears when Knoller recounted Whipple's death. Smith could be seen in the video feed being supported by her spouse, Hillary Ware, as well as Assistant District Attorney Allison Macbeth, who read a statement opposing parole.

In denying parole, the board cited Knoller's disciplinary record while in prison, which includes eight incidents, mostly due to her not showing for work assignments, which Knoller said was related to her physical and mental health.

Knoller, 63, was in a wheelchair during the hearing but it was unclear why. Knoller's most serious disciplinary incident involved her being convicted of a misdemeanor assault of a guard in 2016. Reading from the record, Parole Commissioner Rosalio Castro said that while being treated in an emergency room after fainting, Knoller slapped away and grabbed a nurse who was trying to put a medical monitoring device on her finger and then kicked and bit a guard. The guard was so concerned for his safety that he activated his personal safety alarm. Knoller said she was disoriented and didn't like being touched. She said she didn't remember the attack on a guard.

Knoller said that if she were paroled, she would either move into traditional housing or move to Texas to the home of a friend and one of her late husband's former colleagues. She said she would continue to undergo treatment for her issues with depression, post-traumatic stress disorder, and anxiety. But Knoller seemed to contradict herself by telling the two commissioners "I don't really feel like I am ready for parole."

"That does not mean she is not capable of parole," Hoffs said. "I believe that if she is given a parole date she will rise to the occasion."

Hoffs also read from the transcript of Knoller's 2002 trial in which she was asked by her then-defense attorney Nedra Ruiz how she was doing and Knoller responded by almost immediately segueing into a lengthy statement expressing remorse over what happened. Knoller also expressed remorse before and after her conviction in jailhouse interviews with the Bay Area Reporter.

Both Smith and Kelly were given opportunities to speak but they were cautioned not to speak directly to Knoller.

Kelly read from a prepared statement noting that although Whipple's death resulted in some positive change, the tragedy deeply hurt his family and the relationships within his family. He said that not a day goes by that he doesn't think about the loss of his sister.

Smith moved closer to the camera for her turn to speak. Her image diagonally faced Knoller. At times Smith, her voice choked with emotion, broke down in tears before regaining her composure and continuing.

"I will never know the real truth because she refused to speak it," Smith said.

Briefly going against the rules of the hearing by speaking directly to Knoller, Smith vowed, "As much as I don't want to see you again. I will show up every time you have a parole hearing."

After a recess, both of the board commissioners announced that they agreed to deny parole. Speaking for the panel, Castro said that Knoller's release would pose a "potential threat to public safety." He also noted Knoller's prison record and that she is not taking responsibility for her actions in the crime.

Referring to the apartment hallway attack on Whipple, 33, which occurred in January 2001, Castro said, "When you went out in the hallway you cared more about the dog's health than the public."

Earlier, Knoller had told the board that she took Bane, her male Presa Canario, to the roof of her building because he was having bowel problems and she couldn't wait for her husband to come home and walk the dog. The attack happened just after Knoller returned from the roof. Knoller had also referred to the attack as an accident.

"This was not an accident Ms. Knoller and you need to see that," Castro said.

Knoller had said that she didn't know her dogs were dangerous to people but Castro said that was contradicted by the facts of the case.

Castro noted that the board has the option of scheduling her next parole hearing in three, five, or seven years and that the board decided on three years, in part because of Knoller's age and her adherence to psychiatric medication.

Outside the hearing, Kelly told the B.A.R. that he was happy parole was denied but not pleased that the commissioners scheduled the next parole hearing in three years instead of the longer options.

The denial of parole means that Governor Gavin Newsom won't have to deal with a possible conflict of interest in the case, as he would have had final say over the decision had the two-member board recommended parole. Guilfoyle is Newsom's ex-wife.

The dog-mauling case was one of the most publicized trials in Bay Area history and generated nationwide headlines. Knoller was with the dogs during the hallway attack on Whipple and was convicted of second-degree murder. Her husband, Robert Noel, was convicted of involuntary manslaughter. As the B.A.R. previously reported, Noel died last year of heart failure in a San Diego nursing home on his 77th birthday.

[Editor's note: Portions of this story were published last week.]