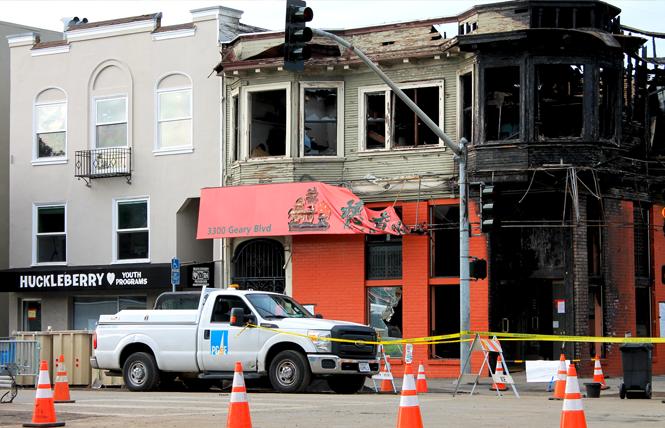 Offices of Huckleberry Youth Programs and the Queer Women of Color Media Arts Project were both affected by the February 6 gas pipe explosion in front of the Hong Kong Lounge II at the corner of Geary Boulevard and Parker Avenue.

The fire that ensued after the explosion at 1:18 p.m. burned for nearly two and a half hours in the Jordan Park neighborhood on the edge of the Richmond district and Laurel Heights neighborhood.

A Pacific Gas & Electric crew was able to successfully access the main gas line and shut it off around 3:30 p.m.

Firefighters contained the blaze shortly before 4:15 p.m. and kept it from spreading beyond the four buildings that were affected.

During those intense hours, flames shot more than 30 to 40 feet into the air during the three-alarm blaze that shut down Geary Boulevard and affected thousands of residents.

Officials from Cal/OSHA, the California Public Utilities Commission, and the National Transportation Safety Board are investigating the incident.

Huckleberry's building, which is adjacent to the Hong Kong Lounge II, was yellow-tagged last Thursday.

The organization has served the city's youth since 1967, said Heather Matthews, director of marketing at Huckleberry.

Executive Director Doug Styles said the organization has been housed at 3310 Geary Boulevard for about 25 years.

The agency provides a variety of services, including temporary shelter at Huckleberry House and Huckleberry health center in the city and in Marin. Its juvenile justice diversion programs were administrated from the Geary building.

It serves 7,100 youth, said Matthews. In its direct service programs, where the organization tracks sexual orientation and gender identity demographics, 18 percent out of the 2,290 youth served identified as LGBT during the 2017-2018 fiscal year. (The organization doesn't ask about sexual orientation and gender identity at some of its programs and workshops.)

Huckleberry hosted trainings and advice services for first-generation, low-income college students and their families at the Geary office, said Styles, a 54-year-old straight ally who has led the organization for nearly five years.

The building also housed Huckleberry's archives and business records, including a letter from slain gay supervisor Harvey Milk, Matthews and Styles said. The letter, which suffered some smoke damage, is at a restoration company.

The 15-member staff was at the beginning of a training for about 25 service providers focused on transgender and nonbinary youth, and one youth was receiving college advice when the explosion happened.

At the moment of the blast, Styles, who was out of the office, said his staff described it like a small earthquake. Some dismissed it as ongoing construction outside the building.

"One of our staff was alert enough to say, 'I'm going to check that out. That doesn't quite sound right,'" he said, adding the staffer quickly responded, "We've got to evacuate."

The staff member went throughout the building making sure everyone got out safely, he said.

As soon as Styles received the news, he raced across town to witness flames billowing above the buildings on the busy corner.

"I was a good block and a half away, and you could feel the heat from it at times," said Styles. "It was very scary, very dramatic."

"It was, on average, three stories high and then it would plum higher than that and smoke was coming out," he said of the fire. "The fire department was dousing that building on the corner, the Hong Kong Lounge. I could see on top of our building. There was a good, probably, dozen firefighters making sure that it didn't spread, but it kept going and going and going."

Two blocks away and around the corner on Cook Street, Kebo T. Drew, the managing director at the Queer Women of Color Media Arts Project, began receiving alerts and sheltered in place for most of the afternoon into the evening with another staff member and an intern.

QWOCMAP Executive and Artistic Director Madeleine Lim was out of the office teaching at the University of San Francisco.

As the alerts flooded her cellphone, Drew, a cis queer femme, frantically reached out to her friends at Huckleberry to check on them and respond to incoming calls checking on the organization, she said.

Her team was able to finally leave the area after some blockades were lifted around 6 p.m. she said.

Be prepared
The fire was a reminder of the importance to be prepared. Both Huckleberry and QWOCMAP's offices were actively improving their emergency plans and policies when the explosion happened.

"I recommend that everybody take that training," said Drew.

"I tend to worry about queer folks in general because ... we are not always included in that kind of stuff, so we really need to do it for ourselves," she said, noting her concern for disabled people and pets too.

However, the training kicked in and knowing what to do was "more reassuring" during the hours they were sheltered in place.

"It's just really weird timing because this is something that we've been working toward and thinking about," said Drew, who said QWOCMAP is moving its office in March. "Incidents like this make it even more important."

Assessing the damage
Huckleberry's office is severely damaged from the fire, smoke, and water, said Matthews, who is unsure about how much can be salvaged.

"We are clearly not going to be using the building for quite a while," he said, grateful for the immediate outpouring of support from the San Francisco community, including donations and offering temporary space for the organization.

"It's really amazing how many people have stepped up in a short amount of time [and] offered their support," said Styles. "We are all in a little bit of shock and the community is banding around us and supporting us and that just feels wonderful and amazing."

Huckleberry will celebrate the 20th anniversary of its juvenile justice program at a gala at the San Francisco Four Seasons April 11.

Resources
The city's Office of Economic and Workforce Development is working with businesses and nonprofit organization affected by the fire, according to a news release from Mayor London Breed and District 2 Supervisor Catherine Stefani, whose district includes the site.

The Fire Response team from the San Francisco Human Services Agency will provide assistance to residents unable to safely return to their homes.

Residents living in non-rent-controlled apartments affected by the fire may be eligible for a subsidy to cover moving expenses to a new unit.

Residents displaced by the fire should call the Red Cross at (415) 427-8010 to register for services and assistance.

Businesses and their employees should call the San Francisco Office of Economic and Workforce Development at (415) 554-6969. Recovery info can be found at www.sf72.org.