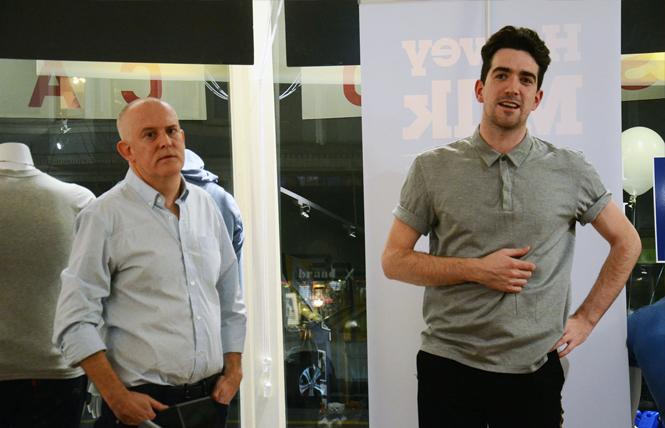 In true Irish fashion, Fintan Warfield came to politics through folk songs from an era before his time: The 1960s.

He was elected senator in the 2016 Seanad elections, winning as a member of the Sinn Fein Party, the same year Ireland was celebrating its centennial of independence from Britain.

Warfield, 26, was one of the participants in the book, "The Children of Harvey Milk: How LGBTQ Politicians Changed the World," and was in San Francisco on a book tour with author Andrew Reynolds last month.

The two men spoke to a crowd of 50 people who crowded into Milk's former camera shop, now home to the Human Rights Campaign store, in the Castro January 12.

The Sinn Fein Party's radical past with the Irish Republican Army and the peace process in the 1990s remained fresh in audience members' minds as they asked about the relationship between the party and Ireland's LGBT movement.

Warfield explained that Sinn Fein and LGBT struggles have been closely linked through the decades. The party was the first to stand by Ireland's LGBT community, he said, when party members marched in Ireland's inaugural Pride parade in Dublin in 1983.

The march commemorated the one-year anniversary of the death of Declan Flynn, a gay man who was brutally murdered in a park, and the Stonewall uprising in 1969 in New York City.

Sinn Fein hasn't given up on its goal for a united Ireland, which Warfield supports. He and a younger generation of Irish members of the once rebel party are keeping their eye on a united Ireland while working on many other progressive issues.

Focus on LGBT rights
Warfield was first elected to office as the mayor of South Dublin when he was 22, making him the youngest person to be elected to a local municipality in Ireland.

He's always run as an out candidate and activist advocating for youth affairs, LGBT rights, the arts, and a spokesman for the party, he said.

Warfield noted that progress on LGBT rights has been made in Ireland, but there is much work that remains to be done.

Since taking office three years ago, he has focused much of his attention on transgender rights. His top priorities are gender recognition for transgender young people between 16 and 18 with parental consent and banning conversion therapy, he said.

He is also working on transgender health care, access to PrEP, comprehensive sex education, and a robust hate crimes law.

The rate was the highest since recording infection rates began, ACT UP Dublin representative Andrew Leavitt told the Irish Times. Rates have consistently been on the rise since 2011, with new infection rates increasing significantly in 2016 and 2017.

Warfield sees intersectionality as a necessity for movements to work together. It's why he is an advocate for working in solidarity not only with other movements but with other politicians around the world.

"The parallels are blatantly clear," Warfield told attendees at the event. "The same people who opposed abortion opposed absolutely everything else that we've done: [from] divorce to equality of marriage."

Warfield has also been outspoken against Tanzania's crackdown on the country's LGBT community that started last November.

"Because we have won many of our demands in Ireland, I want Ireland to be a beacon of hope for oppressed people around the world," he said, describing his desire to be a "critical friend to countries and leaders around the world who take advantage and harm our community."

That includes Ireland and Australia, which both put same-sex marriage up to public vote.

He expressed caution, noting disapprovingly how Australia LGBT activists were forced to use Ireland as an example of how to beat a same-sex marriage referendum that was similar to what Ireland faced in 2015.

Going to the polls wasn't necessary in either country, he told the B.A.R. The legislatures could have handled it, but politics got in the way.

Meeting and getting to know other American LGBT politicians and activists during the book tour has helped him not to feel alone in the political ring.

"I'm just taking mental notes and seeing my experiences or hearing my experiences through their words and their language," said Warfield. "It's really a nice thing to know as a politician that there are also all these other people around the world who have the same anxieties or the same experiences and question the same things. That's been really helpful personally."

Shifting landscape
Warfield is one of the more than 200 out LGBT elected officials around the world today.

The political landscape and the world have changed dramatically since Milk was elected as a supervisor in San Francisco in 1977. His untimely assassination a year later galvanized LGBT politicians in future races.

The changes in the sociopolitical landscape drew the curiosity of Reynolds, a 51-year-old political science professor, about how being LGBT affects policies when sitting at the table.

Reynolds, who is bisexual, teaches at the University of North Carolina at Chapel Hill and is the founder and director of the LGBTQ Representation and Rights Research Initiative, a leading global think tank focused on LGBTQ politics.

Through his research, he found that politics was just as much personal as it was political for LGBT politicians around the world.

He described his experiences in "The Children of Harvey Milk."

Reynolds and Warfield were in San Francisco on the last stop of a 10-day book tour that took them up and down the West Coast with stops in Los Angeles, Palm Springs, and Seattle.

Painting a picture
Due to the number of openly LGBT politicians, a picture is being formed. "We just have more stories, more narratives," said Reynolds, noting that until now it wasn't possible to form an understanding of the experience due to there not being enough out LGBT politicians.

Now, "you can begin to unpack how they change politics," and begin to answer his question: "How have these big quick historical changes in gay rights in America, in Ireland, in Canada, [and] in Britain" happened?

"We are trying to understand how it's happened at a relatively quick pace," he said.

LGBT rights around the world are experiencing change, he said.

"It's just like the best of times and the worst of times," he said, paraphrasing Charles Dickens. "We are seeing more inequality in rights. Some people are really achieving that state of grace where it no longer matters to your rights to your life, but in much of the world it is not getting any better.

So, for everyone person that has ... equal rights, there are three people who are illegal for who they are. That's a huge negative sign for the world," he said.

Reynolds noted the deterioration of the few, if any, LGBT rights in places like Russia and Uganda. At the same time, many Western and Latin American countries and parts of Asia are "going forward," he said, by decriminalizing homosexuality, granting same-sex partnership rights, and creating safe spaces for transgender people.

He couldn't stress enough the impact of LGBT politicians being out.

"The book really just reinforces this case that visibility matters, coming out still matters, [and] being at the table still matters," Reynolds said.

Israeli queer scholar returns to Bay Area
Many people are familiar with Emma Lazarus' famous words engraved on the Statue of Liberty, but few, with the exception of lesbian fans of poetry, know her more Sapphic works.

That's about to change. The works of Lazarus and other women who write in English, Hebrew, and Yiddish have been translated in a new book, "Queer Expectations: A Genealogy of Jewish Women's Poetry" by Zohar Weiman-Kelman.

Weiman-Kelman, a queer Israeli Jewish scholar, will read from her book at two events in Berkeley and San Francisco Friday, February 8.

"I'm excited to have her come and talk about her research working on queer Jewish poetry in Hebrew and Yiddish from over the last century," said Copeland.

The book was conceived in Jerusalem, but brought to light in the Bay Area by Weiman-Kelman, 37, who earned her Ph.D. at UC Berkeley.

Weiman-Kelman is now an assistant professor in the Department of Foreign Literatures and Linguistics at Ben-Gurion University of the Negev in Israel.

While many of the poems in the volume are presumed to be written by straight women, Weiman-Kelman told the B.A.R. there are a few, like Lazarus, who are unabashed about naming their same-sex desire during the late 19th and early 20th centuries. Others did so during the women's movement of the 1970s.

One of Lazarus' poems, "'Assurance,' is really very lesbian, so it doesn't demand any feat of the imagination to name that desire, and she in the poem is explicit in saying this is the thing," Weiman-Kelman said.

The author will be at Congregation Sha'ar Zahav, 290 Dolores Street in San Francisco, from 6 to 7:15 p.m. followed by a service at 7:30. For more information, visit https://shaarzahav.org/event/queerexpectations-zoharweimankelman.