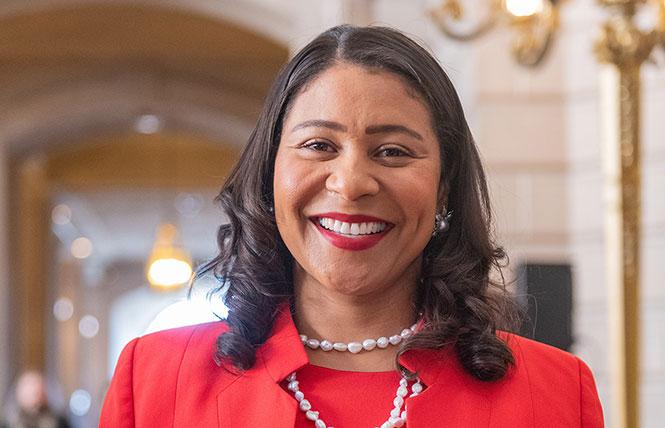 Mayor London Breed has some ideas for revamping the stagnant San Francisco Human Rights Commission's LGBT Advisory Committee, but during an editorial board meeting with the Bay Area Reporter, she echoed the same reasoning that HRC staffers gave for the panel's hiatus.

The questions to the mayor came after the B.A.R. reported in November that the 12-member LGBT advisory panel has only met a handful of times in the last two years.

The panel's spokesman, David Carrington Miree, a gay man, explained that the committee hasn't had enough members present at the meetings to satisfy the required quorum, or minimum number of people needed, preventing the committee from voting or conducting business. He said it was due to the growing number of other LGBT organizations that do not have as many rules and regulations over convening as governmental agencies. The committee usually meets monthly except for December and June, in recognition of Pride Month, but has only met five times in the last two years.

When the B.A.R. sat down with Breed for an editorial board meeting in early December, she was asked what she would like to see happen with the committee and if she has considered shifting it from HRC's leadership to the Office of Transgender Initiatives. A recommendation of the LGBTQ+ Cultural Heritage Strategy, expected to be adopted by city leaders next year, is to expand the services of the trans office to include LGBs.

The mayor first addressed why she believes the panel has been unable to rally its members.

"I am very concerned that the members who are on this body are not participating in this effort and I think it has a lot to do with that there are a lot of other things going on and initiatives people are working on," Breed said.

This was similar to responses given by Miree and Susan Belinda Christian, a lesbian who is chair of the HRC. Miree previously stated, "so many other LGBT advocacy groups in the city have less restrictions and rules and regulations. It's easier for people to navigate that environment than the rules and heavily regulated government-sanctioned committees."

Christian said she and other commissioners were looking to revamp the advisory panel. She would like it to align its work with the commission's.

The mayor then mentioned the work being done at the Office of Transgender Initiatives and followed with, "In some ways [the LGBT Advisory Committee] is probably just taken for granted because there are so many different organizations that are organizing and advocating for a number of different initiatives."

A solution she proposed was to designate leaders of LGBT nonprofits or someone on their staff to participate on the advisory committee.

"For example the LGBT center's executive director can designate themselves or someone who works for them and allow them to incorporate it as part of their job responsibilities. That way we get a real commitment," Breed said. Although she is not looking at including this as a requirement of a nonprofit's contract with the city, she explained the first step is getting nonprofits to agree to the idea.

Nonprofits respond
Some San Francisco nonprofit leaders had their own opinions on the mayor's suggestion. Bill Hirsh, executive director of the AIDS Legal Referral Panel and co-chair of the HIV/AIDS Provider Network, said the idea could come with challenges.

"Nonprofits already have a lot on their plate," Hirsh, a gay man, said, though he mentioned that nonprofits are always looking to innovate and are open to new ideas that improve how they serve the community.

Rebecca Rolfe, executive director of the San Francisco LGBT Community Center, said she has never heard of this idea before, but that she may be agreeable to it after learning more.

"A lot of what we do is work to identify issues within the community and to bring community voices, both to identify them and solve problems," Rolfe, a lesbian, said. "We would have to have some conversations about what the expectations with that group is moving forward, what they want them to accomplish, and see what HRC thinks about that, as they have historically led them."

When the mayor was asked if she has considered having the Office of Transgender Initiatives add the LGBT advisory committee to its portfolio, she said that conversation has happened, but that she is hesitant to do so until the office has additional resources to expand. She also mentioned that the trans office is already working on initiatives that support the lesbian and gay community.

Her reluctance comes from not wanting the trans office to divert from its original purpose.

"I don't want the office to get away from its ultimate mission of what it's there to do and start to fold in additional things to do without additional resources associated with that, but I am also open to ideas of what people may want to see for the purposes of making sure we are delivering on the promises that we are making that are important to our LGBTQ community," Breed said.

Maceo Persson, a trans person who is the civic engagement and operations manager at the trans office, said conversations about expanding the office to address the needs of LGBs has started at City Hall, but that he appreciates the mayor's comments about the office not losing site of its purpose.

"They are very much early conversations," Persson said. "A lot of the work we do already does include the LGB community. Our office is often called on to take on, and advocate on, LGB issues. That scope isn't new for us."

"Ultimately we shouldn't work counter to one another," Breed said. "We should be working together because there are a lot of great organizations out there."

She emphasized creating a more streamlined approach to collaboration similar to when she was executive director of the African American Art and Culture Complex. There, she scheduled regular meetings with heads of various nonprofits to create a year-round event calendar. One example of that was a holiday fair at the center, she said. Multiple organizations came together to put on the event. The YMCA of San Francisco provided face painting, for instance, while other organizations planned the stage performances and other festivities. The center also helped streamline the giveaway of backpacks by community groups.

What the mayor doesn't want to see is multiple organizations putting on the same event and not utilizing resources to the best of all the nonprofits' abilities.

She continued, "It's a collaborative effort where we are serving the community in a more effective way and a more organized way."

Though Hirsh said there are always ways to improve collaboration and that he does agree with Breed, he also noted that nonprofits already work together in ways that folks at City Hall aren't always aware of.

"Nonprofits do a great deal of collaboration, we do that in many ways," he said. "It is really the folks working in the nonprofit community that have the institutional knowledge that people who come and go in City Hall don't always appreciate."

To better coordinate services, Hirsh said, for example, that at monthly HAPN meetings staff highlight any new programs of member agencies to "better connect folks to those services." He also said ALRP collaborates with various organizations to advance the city's Getting to Zero initiative. The Getting to Zero initiative aims to make San Francisco the first city to eliminate new HIV infections, deaths due to HIV/AIDS, and stigma against people living with HIV. It relies on a three-prong strategy of expanded access to PrEP, rapid initiation of antiretroviral therapy, and engaging and retaining HIV-positive people in care.

"It's an incredible collaboration among an array of providers for us to address the health needs of people living with HIV to really make a huge difference," Hirsh said.

Rolfe said she doesn't disagree with the mayor's comments, but that she doesn't know a nonprofit that doesn't work with others. The LGBT center currently has 50 to 70 "active, deep collaborations" and that each of its programs has relationships with different organizations, she said.

"In my experience most nonprofits do work collaboratively and successfully out of their desire to better serve the community" Rolfe said.

Both Rolfe and Hirsh said a big challenge that nonprofits that contract with the city face is the issues surrounding their contract and the process of getting their contracts certified. The difficulties associated with contract certification can often delay the process of the organizations receiving city funding, Hirsh said. A number of nonprofits are sometimes unable to meet payroll, or their invoices, and some have to accrue additional costs, like taking out a line of credit, to meet these costs, Hirsh added.

Rolfe, who sits on the Nonprofit Working Group, a city task force committee, said one contracting problem is that the city considers expenses associated with collaboration administrative funds, not programming funds.

"The city has a cap on indirect costs that they see as administrative costs," Rolfe said. "It's hard when there is a limit on those expenses when those limited funds have to support collaborative efforts and the business and administrative work of the partners."

However, the committee is exploring new contract models, Rolfe said, and how the contracts are structured in order to create flexibility for nonprofits.

Both Rolfe and Hirsh are open to working with the mayor on more collaboration efforts.