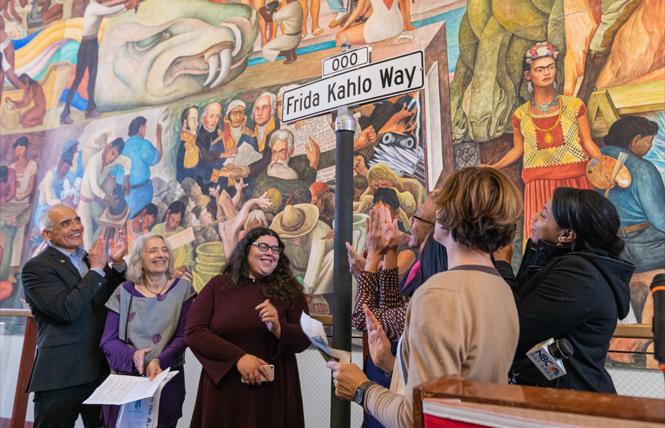 Queer students at City College of San Francisco will now see themselves represented in the community college's address. The official unveiling of Frida Kahlo Way was held at the Diego Rivera Theatre on the college's Ocean Campus December 7.

"It's important to me because of my work on campus. I also work at the Queer Resource Center," said Angelica Campos, vice president of the Associated Students at City College, during the unveiling event. "She is a figure that many students look up to seeing as she was a queer woman of color and also an activist, which happens to be a lot of the work that students I work with have to do."

Speakers at the event talked about Kahlo's influence on the art world, the importance of extinguishing racism, and thanked the many people involved in getting the street renamed. District 7 Supervisor Norman Yee has spearheaded efforts for the past year to change the street's name. In April, a renaming committee, which included Phelan Avenue residents, voted in favor of naming the street after Kahlo, who died in 1954. The Board of Supervisors then unanimously approved the change in June, after the board's Land Use and Transportation Committee gave its endorsement to the proposal at a meeting that also allowed public comment. There, some Phelan Avenue residents expressed disagreement to the proposal.

Yee opened the unveiling ceremony by mentioning the xenophobic legacy of James Duval Phelan. His famous campaign slogan, "Keep California White," was used during his senatorial re-election campaign in 1920 to further anti-immigration sentiment in California, particularly of Asian people.

"We must know our history in order to not repeat the mistakes of our past," Yee said. "We know that efforts to rewrite history takes persistence. That's why we are here today celebrating our new street name Frida Kahlo Way."

He also said he was proud that San Francisco will "acknowledge the contributions of historically marginalized communities of color, particularly of women of color and also the disability community."

Kahlo, born in 1907, was disabled by polio as a child and was involved in a serious car injury at the age of 13, further complicating her disability. Her art was heavily influenced by these experiences and often explored questions of identity, postcolonialism, gender, class, and race in Mexican society. She married hugely influential Mexican artist, Diego Rivera. Currently, the Ocean campus of the college is home to the "Pan American Unity" mural, painted by Rivera, an element that was considered in choosing Kahlo for the street name. Rivera died in 1957.

Ivy Lee, who was appointed by Mayor London Breed to the college's board of trustees earlier this year, said Kahlo is synonymous with the college in that "she represents resilience because even with a broken body her spirit was never broken. She represented the same kind of resilience that City College has been through. We've been broken and we've come back."

She was referring to the accreditation crisis that rocked the community college a few years ago and from which it is still recovering.

City College Chancellor Mark Rocha said the renaming "advances the rights of immigrants of San Francisco and every single one of us is an immigrant," and that people must remember the city's contributions to progressing social justice and called it an "act of self-respect and self-empowerment."

After the speeches, a small crowd watched as Yee counted down from five, then pulled a piece of fabric off the Frida Kahlo Way sign. For one queer alumna in the audience, Angela Newsham, the moment was special.

The performing artist learned about the artist in her various art and women's studies courses at the college. She was there to support the "important" moment.

"It's a huge statement to recognize her," Newsham, who was a student of instructor Leslie Simon at the college, said. "It's rare to see in San Francisco. I live in the Castro and it's even rare to see queer women acknowledged there. It makes me feel stronger and gives me a sense of empowerment."

(A plaque honoring Kahlo is part of the Rainbow Honor Walk in the Castro.)

Simon originally proposed Frida Kahlo Way as the replacement street name when the college submitted its name suggestions. She told a story about the time when surrealist artists discovered Kahlo's work in the late 1930s and asked her to exhibit with them in Paris. Kahlo declined, arguing that she was not a surrealist, but an artist who painted her own reality.

"When the new street signs went up in November I thought to myself, it's surreal and then others started using the same words," Simon said. "But Kahlo would remind us instead that it is real that the address of City College of San Francisco is 50 Frida Kahlo Way."

Though a street sign exclusively with Kahlo's name was unveiled at the event, Frida Kahlo Way will appear alongside Phelan Avenue on all street signs for five years, ensuring that residents have enough time to make changes.

The renaming of Frida Kahlo Way is not the first time that the city has renamed right-of-way in honor of LGBT historical figures or events. As previously reported by the B.A.R., in 2014, San Francisco honored the late transgender icon Vicki Marlane by naming a block of Turk Street in the Tenderloin neighborhood after her. This was the first time the city named a street after a trans person. In 2016, the 100 block of Taylor Street was renamed Gene Compton's Cafeteria Way, after a restaurant that served as a hangout for transgender and queer people in the 1960s. Police raided it in 1966 in what is known as the Compton's Cafeteria riot, preceding the more famous Stonewall riots in New York City.

The City College street renaming is just the latest instance of the city working to remove monuments and other items named after racists or that contain racist elements. Earlier this year the historic preservation and arts commissions voted to remove "Early Days," a statue near Civic Center Plaza that was widely viewed as racist for its depiction of a missionary and a vaquero standing over a nearly naked American Indian. It was taken down in September, hours after the Board of Appeals reversed its earlier decision and voted to remove it.

Frida Kahlo Way is also part of a nationwide, ongoing movement to replace names and monuments of people who no longer represent the values of today's society. A woman died last August during a white nationalist rally in Charlottesville, Virginia, protesting plans to remove a statue of Confederate General Robert E. Lee. Her killer was convicted of murder last week and sentenced Monday to life in prison.