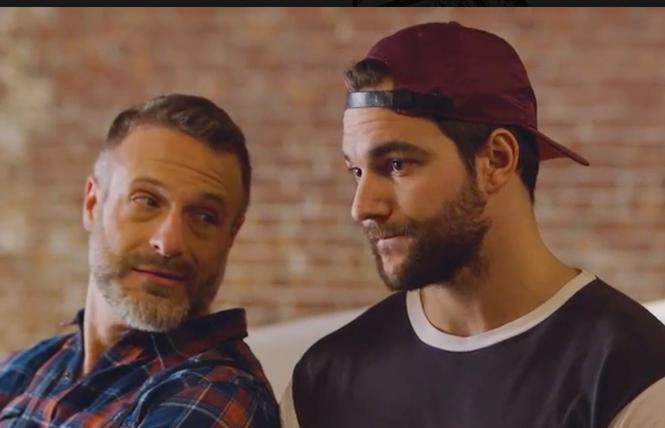 A scene from "Daddyhunt: The Serial." Photo: Courtesy Daddyhunt.com

First there was Daddyhunt, the website in 2006, for older gay men and their admirers. Then there was the Daddyhunt App in 2014. Now there is "Daddyhunt: The Serial," a sequence of short videos that function both as a marketing promotion for the website and as a social experiment to discover whether "health plus tech equals entertainment."

So far, both goals are being achieved splendidly, according to Carl Sandler, 46, Daddyhunt founder and CEO, a gay man who identifies as a daddy himself. He said the three seasons have together attracted nearly 16 million views.

Viewable on YouTube, "Daddyhunt: The Serial" is composed of three successively lengthier seasons, each with multiple episodes ranging from two to nine minutes long. Daddyhunt produced and funded the videos, shot on the East Coast with professional writers, actors, and crew. Season 1 was released in February 2016.

After that, Sandler contacted Dan Wohlfeiler, 62, a gay man who is co-founder and co-director of the Building Healthy Online Communities coalition. BHOC has a long history of working to incorporate health messages into TV and media, according to Wohlfeiler.

Wohlfeiler previously worked as director of education at the former Stop AIDS Project (now part of the San Francisco AIDS Foundation). He is currently chief of the Office of Public/Private Partnerships in the STD Control Branch of the California Department of Public Health.

BHOC had conducted a survey in 2009 to determine which strategies to promote safe sex would be most supported by dating and hook-up site owners, HIV and STD programs, and users.

"We knew some were already doing things like automatic reminders for STD testing," Wohlfeiler said, "but we wanted to integrate prevention into the sites."

BHOC worked with website owners in 2014 to expand profile options, for example allowing users to specify their viral load and use of PrEP.

"Lots of sites were incredibly cooperative," he recalled, "and we gave them advice on how to build safe sex into the sites."

But the videos were something new and different.

He admired the writing and high production values, and quickly accepted Sandler's offer to collaborate on scripts for Season 2, incorporating storylines about PrEP, condoms, and safe sex.

With the Daddyhunt videos, Wohlfeiler said, "We've been able to reach millions more men than with a safe-sex PSA (public service announcement) by itself."

In contrast, Sandler estimated public health PSAs usually get between 10,000 and 100,000 views.

Entertainment with a message
The secret, according to Sandler, is to incorporate entertainment in the message.

Sandler described the original motivation for the Daddyhunt videos as "a way to show people that Daddyhunt was more than a sexual fetish. We wanted to show that lots of older guys are looking for a relationship," he said, and he considers that one reason Season 1 was so successful.

Sandler later wrote a column for Huffington Post on the subject of safe sex where, according to website Digital Culture and Education, he addressed issues including Truvada/PrEP and HIV stigma.

He expressed some frustration with the approach of many public health agencies, and observed, "Public health has been very slow to embrace the ways our community has connected via social media."

"Daddyhunt: Season 1" introduces the two central male characters and their attractive friends. One of the men (Ben) is referred to as Boy, though he's 25, and Daddy is an older guy (Graydon) who appears to be over 45. They meet and eventually reconnect (surprise!) while using the Daddyhunt App, but their chemistry feels authentic and sexy.

BHOC became involved in Season 2. In Season 3, Wohlfeiler said, "We worked together to include issues like how to deal with notifying a partner that you may have exposed them to an STD, but with humor included. We wanted to show issues that gay men face in this century, and to reinforce the message that there's no single best strategy for everyone."

In Season 2, Ben and Graydon are close to having sex for the first time, which triggers a discussion about Ben's use of PrEP. Graydon responds by saying, "I can't get my head around just taking a pill" and the men do not have sex.

"I wanted to reflect an issue which was happening at the time (controversy about the introduction of PrEP)," Sandler explained.

Just released October 24, Season 3 returns to the PrEP controversy as Ben and his HIV-positive friend AJ look for a boyfriend for AJ and read a profile that includes the comment, "No Poz, No PrEP whores."

Sandler said, "We (at DaddyHunt) have a positive image of PrEP." He also proposed that when men insist on condoms, it proves the effectiveness of safe-sex education.

Season 3 includes a scene in a public STD clinic. "We wanted to normalize testing as part of being a responsible gay man," Sandler said, and the same topic is addressed in PSAs his company also produced with many of the same cast.

Wohlfeiler said Season 3 alone has already had 1.6 million views; 20 percent of those viewed the Spanish-language version. Daddyhunt PSAs have attracted another 500,000 views.

"We've started to talk about producing a Season 4," Sandler revealed, but he noted that each season takes about a year to produce.

Wohlfeiler reacted with great enthusiasm to this possibility: "We would love to work with Daddyhunt on this."

Sandler suggested that apps have become the way many gay men come out and first encounter the gay community.

"They may not have spoken to their doctors about having safe sex," he said. "We give them a series of questions to fill out, including what their safer sex preferences are. People want to feel those behind the apps care about their health."

With that goal in mind, Wohlfeiler is also working with the sites Adam4Adam, Grindr, GROWLr, and Poz Personals.

"These apps are willing to use their assets, knowledge, and technology to promote our community's health," he said.

"There are not enough stories about older gay guys falling in love," Sandler asserted, "and our culture doesn't really focus on this." But he believes, "We are in a Daddy moment culturally, and I like to think our videos have been a part of that."

Daddyhunt.com currently hosts about 4 million profiles and has about 1 million active users. It's free to join and has a premium version with additional features available for a fee.

Updated, 12/14/18: This article was updated with the following: Wohlfeiler's titles with the California Department of Public Health; that the 2009 survey was to find what would be most supported by dating and hook-up site owners, HIV and STD programs, and users; and that "Daddyhunt" Season 3 included a notification episode.