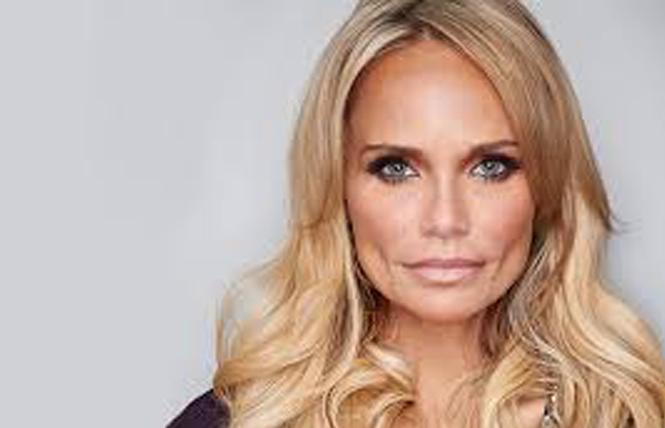 I saw that you, Kristin Chenoweth, recently told the Salt Lake Tribune that you turned down our hope and request that you would cancel your three nights of performing with the homophobic Mormon Church's Tabernacle Choir. Your refusal to side with the LGBTQ community came just four days after an op-ed that I wrote ran in the Tribune entitled, "Chenoweth Should Bow out of Tabernacle Choir Concert."

Did you know that just two months ago Dallin H. Oaks, of the Mormon Church's First Presidency, stood in the very spot where you plan to perform next week, on the stage of the Mormon Church's Conference Center? Oaks called allies of LGBTQ equality like yourself messengers of Satan. He intimated that because you happen to support the LGBTQ community you are doing Satan's bidding by fighting for love and equality.

Pretty strong words from the head of the Mormon Church. How offensive that must be to you and all your friends. That's certainly not the kind of company that I would like to keep. And we at Rights Equal Rights hope that you won't either.

Oaks is not only in the First Presidency, but he is next in line to become church president, prophet, and revelator. This man of God viciously attacked the entire LGBTQ community in October just like he does every six months at the Mormon Church's biannual General Conference.

Many courageous people walked out of Oaks' hate-filled speech two months ago. Mothers and fathers of LGBTQ kids, friends, siblings, and so many who just can't stand to hear any more hate, any more shaming and bullying directed at people they love come out of the mouths of Mormon Church leaders.

Kristin, won't you stand up to this constant hate and walk out, too? We at Rights Equal Rights have been actually asking you for over a month to do the right thing and #BowOutKristin. I tried to go through your manager and delivered a letter to you at his New York office on Halloween. We never heard back.

We launched our national appeal to you just last Sunday. Please open your heart and your mind to the thousands and thousands of LGBTQ Mormon teenagers and adults so impacted by Oaks' remarks that day, who saved his most vile remarks for the vulnerable transgender community when he said, "God's plan required opposition to gender transition and same-sex relationships ..."

Just how many LGBTQ Mormons heard their president's words that day from the stage of the Conference Center? According to experts, that type of rhetoric coming from leaders of the Mormon Church can cause a massive wave of depression and suicides, especially with young people.

The Mormon Church is using you to try and bury its 40 years of actions and hate against the LGBTQ community. It likes to have LGBTQ allies close by, all while it does everything in its power to take away our rights. This was just done in June when it allowed the artistic director of the San Francisco Gay Men's Chorus, Tim Seelig, to conduct the Mormon Tabernacle Choir. It's a shame, all done to try and mask all the horrific things it does and the epidemic of LGBTQ teen suicides.

Kristin, you have been a staunch ally of the LGBTQ community for a long time. You've received honors from GLAAD, the Point Foundation, and, most recently, the Trevor Project.

The leaders of the Mormon Church are well aware of all that you have done, especially speaking out against the bullying and shaming of vulnerable LGBTQ kids. You have done a world of good through all your action. If you perform with the Mormon Tabernacle Choir next week in Salt Lake City, you're just sanctioning the decades of hate by Mormon Church leaders toward LGBTQ Mormons and the LGBTQ community at large.

Is this the type of legacy you want to leave? Is this your message to all your LGBTQ fans? Do you really want to appear on the same stage where that kind of hate speech was just delivered by Oaks to a worldwide audience? We certainly hope not.

Please do the right thing and #BowOutKristin and don't sing with the homophobic Mormon Church's Tabernacle Choir.

Fred Karger has been an LGBTQ activist taking on the opponents of equality for the last 12 years. He has focused on fighting back against the Mormon Church until it welcomes all LGBTQ Mormons and their families back into the church. For more information, visit http://www.rightsequalrights.com.