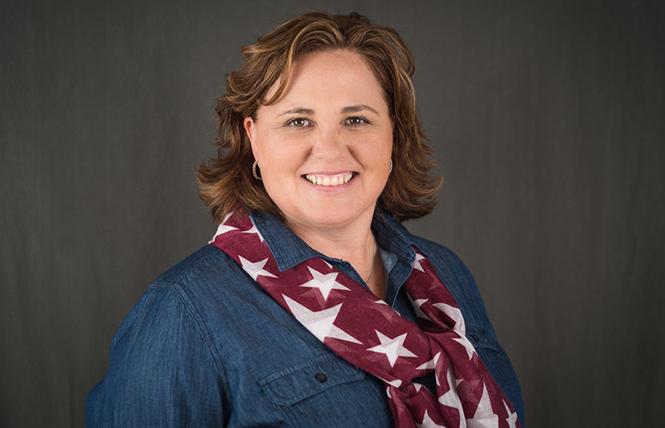 The latest vote tally shows Moon, currently an operations captain at the Nevada County Sheriff's Office, with 28,107 votes, or 57.83 percent, and Smethers, an executive lieutenant with the department, with 20,498 votes, or 42.17 percent.

In January, Moon will take her place as sheriff of the small northern California county's largest law enforcement agency replacing Sheriff Keith Royal, who is retiring after first being elected in 1998. Moon, 50, spoke with the Bay Area Reporter Wednesday and said she's proud to be the first lesbian sheriff, but that she looks forward to a time in which being a gay sheriff doesn't make headlines.

"I just look at it as it's who I am," she said. "It's difficult to look outside of me, but I understand the impact externally and that's the part I still try to be cognizant of. It's a good thing for the LGBT community to have."

In the June primary in the county that includes the towns of Truckee, Nevada City, and Grass Valley, Moon and Smethers advanced to the general election after coming in first and second. Former Grass Valley Police Chief John Foster came in third.

The first priority for Moon is creating a five-year strategic plan for the department. Though she does not plan to implement any specific LGBT polices, she said, "the fact that I am here and people in the community can know that because of my perspective and who I am, there will be more of a voice for fairness and equity and equal treatment."

The stepmom of three has served Nevada County in various law enforcement positions for over three decades. According to her campaign website, she is the first woman to earn the ranks of sergeant, lieutenant, and captain in the 167-year history of the Nevada County Sheriff's Office. She has served as a major crimes detective, narcotics K9 handler, led the hostage negotiation team, and has been a Superior Court bailiff.

"I have made a lot of firsts here," she said. "I grew up in this community and it's a beautiful place to live. For the last 28 years, I have looked at ways to improve the department and as the head of an agency I am now able to represent my department and my community. I care about making sure we have the best practices."

She shared the challenges and the support she's received growing up in Nevada City and making her way up the ranks in the force as a gay woman. Her father was a Nevada County deputy and Nevada City police chief.

First starting work at the Nevada County Sheriff's Office in 1990, she said it was challenging "to be an LGBT in a rural area" and that there was a locker-room type mentality among the men in the department and she knew as a woman she would need to work harder to get ahead. Many men throughout her career also supported her, she noted.

Her decision to run for sheriff grew out of her desire to give back to the community.

Sunny Schwartz, a lesbian who worked for the San Francisco Sheriff's Department for more than 30 years as a program administrator, said she was proud to see a member of the LGBT community finally be elected sheriff in the state.

"It's always heartening when anyone from our community gets elected and is out and proud," Schwartz told the B.A.R.

"It's heartening that someone from our community is recognized and encouraged to lead. It's a historical moment of pride," she added.

Schwartz also said that she believes Moon will bring a "no-nonsense humanity" to the rank and file and upper echelon of the department.

Other sheriffs
California was not the only state to elect its first LGBT sheriff this month. Hennepin County in Minnesota has a gay sheriff-elect, Dave Hutch. Hutch defeated pro-Trump and anti-immigrant three-term incumbent Rich Stanek by more than 2,300 votes.

Though Moon has made history as the first openly gay sheriff in the Golden State, other LGBTs have run in the past. As previously reported in the B.A.R., Jay Foxworthy, a gay deputy sheriff in San Francisco, last year announced his campaign for sheriff of Sonoma County, which includes the gay Russian River resort area. He ultimately dropped out of the race for personal reasons. Dave Myers, a gay man and commander with the San Diego County Sheriff's Department, ran this year for sheriff but lost.

In the 2011 sheriff's race in San Francisco, two gay men, then-police officer Michael Evans and former sheriff's deputy Jon Gray had pulled papers to run, but both opted not to officially enter the race.

There have only been a few out elected sheriffs in the country, one of the first being Margo Frasier, a lesbian elected in 1997 as sheriff of Travis County, which includes Austin, Texas. Another Texan, lesbian Dallas County Sheriff Lupe Valdez, won her fourth term November 2016. She resigned last December to run for Texas governor, but lost.

In Arizona, former Pinal County Sheriff Paul Babeu won re-election in 2012 after being outed as gay by an ex-boyfriend. His term expired January 1, 2017.

For Moon, her family comes first. In 2010, Moon met her wife, then Amy Perez, who had three daughters. Amy Moon is a county deputy probation officer. The pair married in 2014, a day Moon told the Union was "the best day of my life."