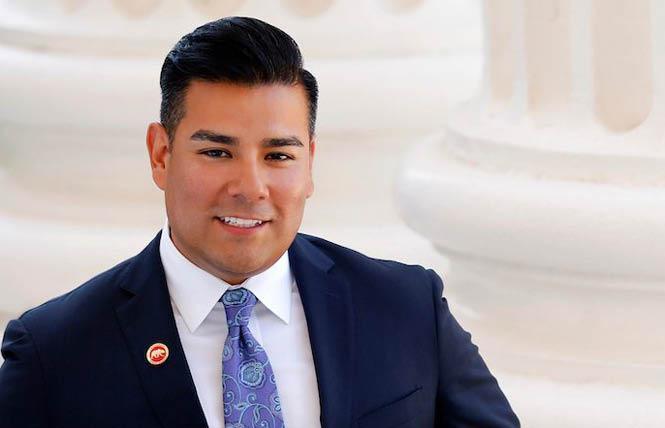 After his opponent called him to concede late Monday, gay state Senator Ricardo Lara (D-Bell Gardens) declared victory in his bid to become the first out statewide elected leader in the Golden State.

In January, he will be sworn in as California's eighth elected insurance commissioner. By winning his now historic campaign, Lara has broken through a rainbow political glass ceiling no other out LGBT candidate in the state has been able to do over the last two decades.

In an exclusive statement Monday night to the Bay Area Reporter, Lara said he was "grateful for the support of California voters who deserve a strong consumer advocate. Helping communities recover from wildfires while preparing for the threat of climate change will be my first job as insurance commissioner."

Lara, who turned 44 the day prior to the November 6 election, added that, "as communities are rocked by devastating wildfires, Californians need a healthy, honest insurance market that allows them to quickly rebuild their lives and protects against future disasters."

"In an already historic year for LGBTQ candidates across California and the nation, Ricardo has proven that an openly gay son of a factory worker and seamstress who immigrated from Mexico can grow up to represent 40 million people in the world's fifth largest economy," stated EQCA Executive Director Rick Zbur. "We look forward to working with Ricardo in this new role and wish him continued success as he fights to improve the lives of all Californians."

Yet Lara and his opponent, Steve Poizner, kept quiet over the weekend as they continued to wait for elections officials to tabulate more ballots. As of Monday afternoon, Lara was at 52 percent or 5,345,900 votes, while Poizner was at 48 percent or 4,931,105 votes. The Republican-turned-independent had previously held the position from 2007 through 2011.

It is a stunning victory for Lara, who was seen as the underdog heading into the election, with some polls showing him losing by double digits. His win is all the more remarkable considering that Poizner had won the endorsements of 24 newspapers in the state.

Lara will now resign from his state Senate seat by early January, which will prompt a special election to be held in early 2019 in his Los Angeles area district. When he does step down, it will also mean that the California Legislative LGBT Caucus will see its membership shrink in the next legislative session for the third time since it was established in 2002.

Currently, there are eight out members of the state Legislature, four each in the Assembly and Senate. Lara's departure will bring it down to seven, as none of the non-incumbent LGBT legislative candidates won their races this year.

There is a chance the LGBT caucus could return to having eight members, the most it has ever had, should an out candidate win the special election for Lara's Senate seat. His 33rd Senate District includes the Los Angeles County cities and communities of Cudahy, Bell, Bell Gardens, Lynwood, Maywood, Signal Hill, Paramount, South Gate, Vernon, Walnut Park, Huntington Park, and most of Long Beach with portions of the cities of Lakewood and Los Angeles.

Gay Long Beach Mayor Robert Garcia is often mentioned as a potential candidate, though one local publication recently reported that it is doubtful he would enter the race.