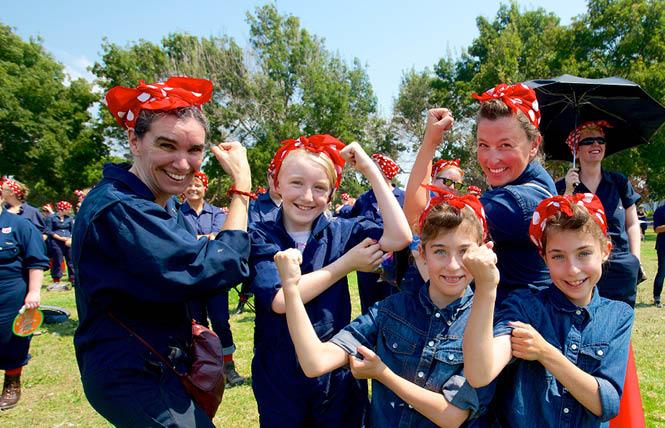 The Rosie the Riveter Trust has received a challenge grant and is seeking donations, which will be matched up to $20,000 until December 31.

The grant, from a generous donor, is for one of the trust's programs, Every Kid in a Park.

Since 2016, the trust and the Rosie the Riveter/WW II Home Front National Historic Park have brought more than 3,500 underserved fourth graders to learn history at the park. For many of the children, this is their only field trip of the year.

Donations can be made in multiple ways, including at the gift store at the Rosie Visitor Center, 1414 Harbour Way South in Richmond; online at www.rosietheriveter.org/join-us/donate (specify Every Kid in a Park or gift); or send a check to Rosie the Riveter Trust, P.O. Box 71126, Richmond, CA 94807.

Longtime LGBT community stalwart Tenderloin Tessie's will hold its meal from 1 to 4 p.m. at First Unitarian Church, 1187 Franklin Street at Geary. Attendees can expect turkey and all the trimmings in a festive atmosphere.

Meanwhile, Glide Memorial Methodist Church will serve meals from 10 a.m. to 1:30 p.m. in the dining hall at 330 Ellis Street.

There will be a Thanksgiving celebration service in the sanctuary at 10 featuring guest speaker Marvin K. White, a gay man who is a local preacher, poet, and activist, and the Glide Ensemble and Change Band.

Glide's holiday programs will continue through the end of the year. They include the annual grocery bag giveaway Wednesday, December 12, from 7:30 to 10:30 a.m. at the church.

For volunteer opportunities, or to donate, visit http://www.glide.org.

As previously reported, Mayor London Breed's office informed RWF Executive Director Jeff Cotter in August that the tree, which contains messages for peace that are hand-folded into origami cranes, would not be at San Francisco City Hall this year.

Cotter, a gay man who heads the LGBT-focused humanitarian agency, said in an email newsletter to supporters that Grace Cathedral is a "beautiful venue that is open to the public."

"Grace Cathedral has a tradition of welcoming people of all faiths and spiritualties (including non-belief) and they are a strong supporter of the LGBTQ community," Cotter added.

Grace Cathedral hosted the Tree of Hope four years ago when a communications snafu prevented it from being in City Hall in 2014.

There are several dates and times available for volunteers beginning Saturday, November 24, from 9 a.m. to 3:30 p.m., and continuing through Friday, November 30. Decorating will be done at Grace Cathedral, 1100 California Street. For a complete list of days and times, and to sign up, visit https://www.worldtreeofhope.org/help-us/.

The tree lighting ceremony will be held Monday, December 3, at 6:30 p.m.

The money will be used to retrofit the building's windows.

Zulberti said the staff is now in the process of obtaining the necessary city permits for the work.

The Women's Building, at 3543 18th Street, is a city landmark, though it was listed for its historical significance predating the modern LGBT rights movement. In May it became the second location in the city to be deemed a national historic site due to its LGBT cultural significance.

Because of its historical significance, Zulberti said the staff is "having conversations about the kind of retrofitting we can do."

As of now, there are no plans to add signage to the building recognizing it at a national historic site, she said.

Zulberti said the Women's Building hopes to have the window retrofit work completed by next summer.

Partners in Preservation is a community-based partnership, created by the National Trust for Historic Preservation and American Express, to raise awareness of the importance of preserving historic places and their role in sustaining local communities.

The Women's Building won the grant through an online vote.

Sing carols on cable cars
Cable Car Caroling returns for the 34th year and people can sign up to participate and help raise funds for the Institute on Aging.

There are a couple of donation options. Until November 16, early bird pricing is available for adult tickets, $75, and various family packages, starting at $100. Tickets for seniors and students are $50, while children ages 6-12 are $25. People can also choose to participate in the Cable Car Caroling challenge, in which the ticket is free and people commit to fundraise a minimum of $200.

For more information and to sign up, visit https://give.ioaging.org/event/cable-car-caroling/e199727.