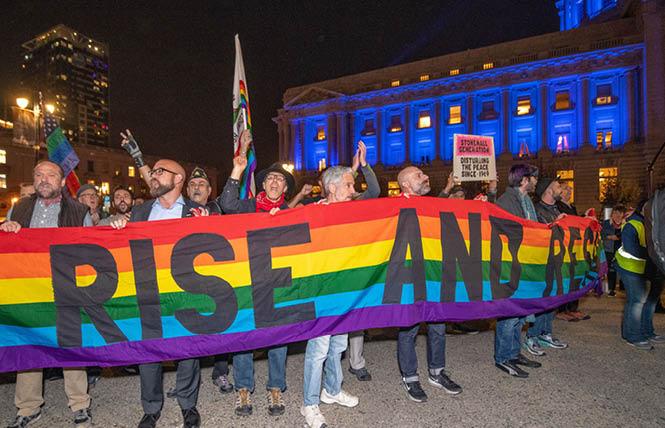 Demonstrators took to the streets of San Francisco November 8 to demand that special counsel Robert Mueller be protected from political interference with his investigation of Russia's meddling in the 2016 presidential election. Photo: Jane Philomen Cleland

Just as Malcolm and Macduff gathered their forces for the final assault on Macbeth's castle, anti-fascists in San Francisco and around the country continue to rise regardless of the outcome of last week's midterm elections.

"We have to confront the reality of it," said Barry Thornton, an organizer with Refuse Fascism, at a rally at San Francisco's City Hall Wednesday, November 7. "This is a fascist regime, and it has to be called out for what it is.

"We need a force of millions to drive this regime from power," he added.

On one hand, the midterms — as expected — returned control of the House of Representatives to the Democratic Party. On the other, the fascists retained control of the Senate — and promises to engage in "bipartisanship" from House Minority Leader Nancy Pelosi (D-San Francisco), the former House speaker who is the front-runner to resume that position when the next Congress is seated in January, have left many activists cold.

"We need to break out of the whole framework of relying on the Democratic Party to stop fascism," said Rafael Kadaris, an organizer with the Revolution Club. "It is the system which produced the fascism in the first place.

"Donald Trump didn't come out of nowhere," he added. "He came out of the whole ugly history of this country." 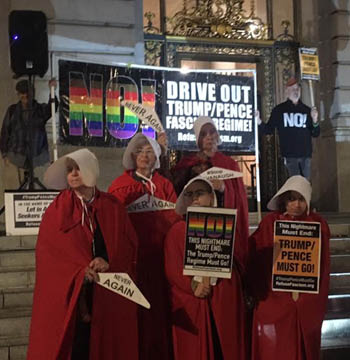 Protesters dressed as Handmaids prepare for an anti-fascist action at City Hall in San Francisco November 7. Photo: Christina A. DiEdoardo

Some of that ugliness was playing out in Washington, D.C., where Attorney General Jeff Sessions, who had long outlived his usefulness to the regime, finally resigned under pressure last Wednesday. The news was greeted with relief by many, given Sessions' key role in the Department of Justice's attacks on the rights of trans people and on the regime's policy, which many contend violates international law, of intentionally separating immigrant children from their parents. However, some worry that his successor will find a way to restrict or terminate the investigation into Russian interference with the 2016 presidential election led by special counsel Robert Mueller. Protests took place in San Francisco and around the country Thursday, November 8, to demand that Mueller be protected from political interference with his investigation.

Of course, the bigger question is whether those who answer the call to go out into the street for an event will stay there until the regime is removed, especially when that requires them to break the law. That's been a necessary ingredient for rebellions around the world that have taken place since World War II, but one that many on the left find hard to swallow. Still, the trend of more and more people being willing to accept direct action as a valid tactic is positive — and after all, as Jyn Erso in "Rogue One" teaches, "Rebellions are built on hope."

#EnoughIsEnough
At 5:30 p.m. Tuesday, November 20, organizers of 2018's Transgender Day of Remembrance will lead a march from San Francisco City Hall to the Louis B. Mayer Auditorium at UC Hastings College of the Law, 200 McAllister Street. The TDOR program, which honors the memories of those trans people lost to violence in the previous year, will begin at 6 p.m. Admission is free, and organizers are asking attendees to use the hashtag #EnoughIsEnough when discussing the event.

We won't be erased
At 5 p.m. Monday, November 26, French-Canadian cartoonist Sophie Labelle, who draws the acclaimed "Assigned Male" comic strip, will release her latest book "We Won't Be Erased" at Comix Experience, 305 Divisadero Street in San Francisco. Labelle, who is also a trans woman, has broken new ground in telling the stories of both binary and nonbinary trans characters with humor and love. Unfortunately, that has also made her a target for transphobes on both sides of the border, who have responded with threats, doxing, and worse. Even so, Labelle has been praised within the community for her grace under pressure and steadfastness in the face of these provocations, as well as her decision to respond by creating even more art.

The release party is her first public event in San Francisco. Admission is free, and she will have books and other merchandise available for sale.