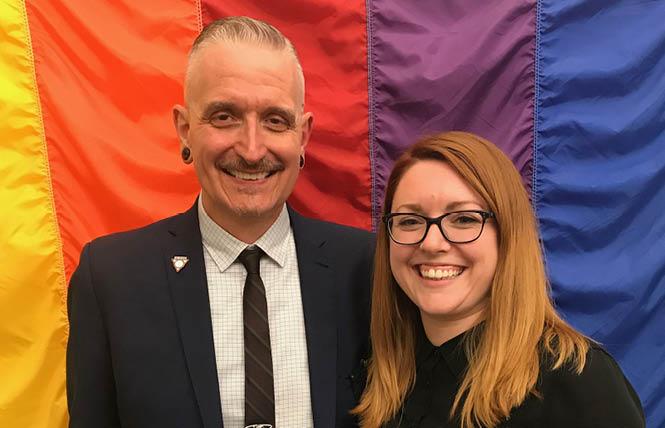 Jacquelene Bishop, a bisexual woman who had been serving as San Francisco Pride's interim president since the October 3 departure of former board president Michelle Meow, was elected to the post at the organization's November 7 board meeting.

Bishop, a certified public accountant, won the election as president of the San Francisco LGBT Pride Celebration Committee's board with eight votes, while board members Carolyn Wysinger and William Walker got two votes each. Bishop had previously served as Pride's treasurer.

In order to win an election, a candidate must receive at least 50 percent plus one of the votes from the board members present at any given meeting.

"I feel very humbled by the many people who have worked tirelessly to gain the progress that we have accomplished over the last decades," Bishop, 31, told the Bay Area Reporter after the meeting. "I want to thank them, and they will be in my mind and heart as I serve in this role."

The choice for vice president was put off until the December meeting due to the board's inability to elect a clear winner for the office. In the first round of voting there was a three-way tie with candidates Gray, Little, and Calma getting four votes each. In the second round of voting Gray received three votes, Calma received four, while Little received five.

Gray was eliminated for the third round of voting, and Calma and Little tied with six votes each.

The board voted to revisit the vice president position at its next meeting.

The board then moved on to the position of treasurer. Bishop withdrew her candidacy, leaving Ford as the sole person for the office. She won with 11 votes. Ford, a 53-year-old transgender woman, was elected to the Pride Board for the first time at the annual general meeting in September.

"I feel honored and a little in awe of being treasurer of such an iconic organization," Ford said. "I look forward to continuing to keeping Pride fiscally successful. I want to thank former board member Melanie Nathan for pushing me to get involved."

When she was running for a board position in September, she said that if elected, she would "strive to maintain that blueprint while looking for ways to be more inclusive and responsive to our people. I pledge to be a supportive team member who always looks to advance SF Pride."

The final vote of the evening was for secretary of the board, for which there were two candidates. Current secretary Pham was declared the winner with nine votes, while Lynch received three.

Pham, a 34-year-old gay man, was thrilled with the result.

"I'm proud to be starting my second term on the Pride board, continuing in my role as secretary," he said. "I have marched in the past 18 San Francisco Pride parades, 16 of those with Cheer SF, and I look forward to continuing to give back to an experience that has given me so much."

George F. Ridgely Jr., executive director of San Francisco Pride, said the organization welcomed its new and returning executive officers on the board.

"We are fortunate to have a board who is active, engaged, and committed to open dialogue," Ridgely wrote in an email. "A group of exceptional individuals, as a collective they bring experience, compassion, and a keen eye on the health of the organization and the annual event. Elevating all of the voices around the table can be challenging, but the board admirably works together to find creative solutions. I look forward to presenting a great season of programming alongside the board, staff, and contracted talent for the 49th annual San Francisco Pride celebration and parade this coming June."

In other news, SF Pride this week began accepting nominations for community grand marshal for next year's Pride parade. SF Pride staff said information should be posted by Friday at http://www.sfpride.org.