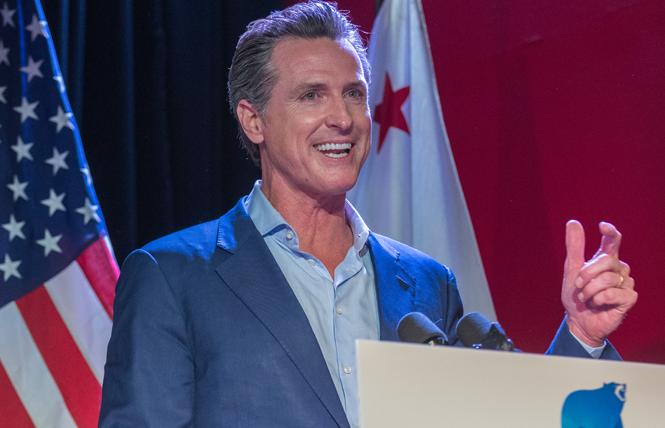 Lieutenant Governor Gavin Newsom, who became a hero to the LGBT community when, as mayor in 2004, he ordered San Francisco officials to issue marriage licenses to same-sex couples, coasted to victory in the California governor's race Tuesday, ensuring that the state will continue protesting many of President Donald Trump's policies while maintaining its cutting edge on a variety of issues.

Meanwhile, state Senator Ricardo Lara (D-Bell Gardens) was holding onto a slim lead for insurance commissioner. If it holds, Lara would become the first openly gay person to win statewide office. As of Wednesday morning, unofficial returns had Lara with 50.8 percent. Steve Poizner, a former Republican running this year as an independent, had 49.2 percent.

I'm so proud of my colleague & friend, Senator Ricardo Lara, who's leading in the race for Insurance Commissioner. If Ricardo prevails - I believe he will - he will be the first openly LGBT statewide elected official in California history. Go Ricardo! pic.twitter.com/iRk57hGSXA

The governor's race was not a surprise, as Newsom had been polling well ahead of his Republican opponent, businessman John Cox. Newsom garnered 59.4 percent of the vote, while Cox got 40.6 percent.

Newsom celebrated election night in Los Angeles and on his Facebook page early Wednesday said, "Now is the time for going far and going together. For facts. For trust. For truth. Now is the time for leaders to lead. This is California's moment. Incredibly honored and privileged to serve as this great state's next governor."

The Democrat is an advocate for gun control, legalized cannabis, and immigrant and LGBT equality.

In 2004, just 36 days into his first term as San Francisco mayor, Newsom upended the status quo by ordering city officials to issue marriage licenses to same-sex couples. The "Winter of Love" galvanized the marriage equality movement that 11 years later culminated in the U.S. Supreme Court legalizing same-sex marriage nationwide. At the time, most other Democrats shied away from supporting marriage equality, which is now a standard part of the party's platform.

During his campaign, Newsom told the Bay Area Reporter, that he would lead efforts to develop 3.5 million new housing units that are needed by 2025. Once in office he hopes to expand health care for all, get closer to closing the gender pay gap, and make it easier to access and afford a higher education.

Cox, a wealthy businessman, said the Democratic Party was to blame for the homeless and housing crises and high taxes in California. He was a strong proponent of repealing the gas tax and canceling plans for the state's $77-billion high-speed rail system.

In other statewide races, Senator Dianne Feinstein easily won re-election with 54.3 percent of the vote, according to unofficial returns. She was facing a challenge from the left from state Senator Kevin de Leon, who captured 45.7 percent of the vote.

De Leon, who was endorsed by the California Democratic Party, is the former president pro tem of the state Senate. He ran hoping to oust Feinstein, claiming the state needed a more progressive voice and more aggressive style of representation to take on Trump. But voters apparently disagreed, sending Feinstein back to the Senate for a fifth term. 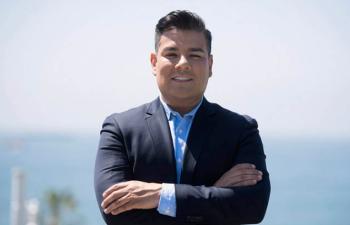 Other races
Eleni Kounalakis, who had broad LGBT support, won the race for lieutenant governor with 55.6 percent of the vote. Fellow Democrat state Senator Ed Hernandez (D-Azusa) trailed with 44.4 percent.

"It's still early with 34% reporting — but we're feeling positive! I am so grateful for the incredible grassroots campaign we built together," Kounalakis said on Twitter around 11 p.m. on Election Night. "And together, we're going to bring it home!"

By Wednesday morning, 97.2 precincts had been reported.

Kounalakis previously served as ambassador to Hungary under President Barack Obama where she was chief of mission at an embassy staffed with nearly 400 people. She currently chairs the California Advisory Council for International Trade and Investment.

Incumbent Secretary of State Alex Padilla (D) handily won re-election with 61.7 percent of the vote. His GOP challenger, Mark Meuser, was at 38.3 percent.
"Thank you Californians, for allowing me to serve another term as your Secretary of State!" Padilla wrote on Twitter Wednesday.

California's top public education race is too close to call. For superintendent of public instruction, charter school advocate Marshall Tuck (D) has the lead with 50.6 percent of the vote while his challenger, Assemblyman Tony Thurmond (D-Richmond) was at 49.4 percent.

Tuck, a former Los Angeles schools executive, previously ran for the seat in 2014, but was unsuccessful.

Thurmond, who has the backing of teachers unions, rejects U.S. Secretary of Education Betsy DeVos' proposal to take money from public schools to fund charter schools. He also has demonstrated leadership on LGBTQ issues and is endorsed by Equality California.

San Francisco Board of Supervisors President Malia Cohen won a seat on the state Board of Equalization with 69.5 percent of the vote, according to unofficial returns.
"We did it! I am humbled by all your overwhelming support yesterday and over the last 18 months," Cohen tweeted Wednesday. "I will be your voice for accountability at the Board of Equalization. Together we will fight to make California more fair."

Cohen ran against Republican Mark Burns, who earned just 30.5 percent of the vote.

Becerra, who was appointed by Governor Jerry Brown after Kamala Harris won election to the U.S. Senate, thanked supporters.

"Thank you, California! I'm humbled and honored to continue as your attorney general for the next 4 years!" the incumbent said on Twitter Wednesday.

Becerra became California's first Latino attorney general. He is well known for his resistance to the Trump administration and his support for the LGBT and immigration communities.