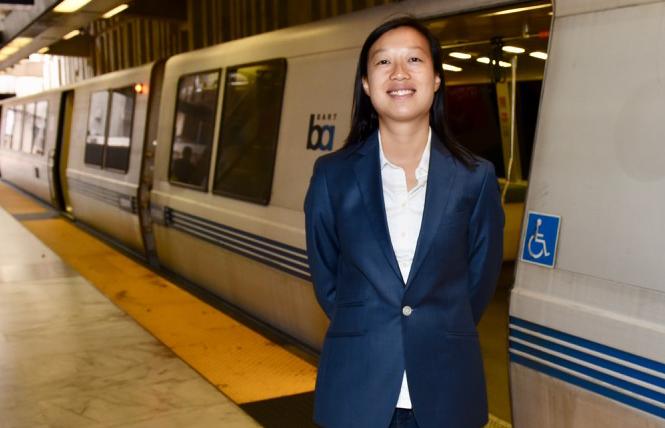 Janice Li is poised to become the first queer Asian woman to serve on the BART board. Photo: Steven Underhill

The board that oversees the regional BART transit system is poised to get its first queer Asian woman after Janice Li took a commanding lead in the District 8 race Tuesday.

According to unofficial returns, Li, whose district is in San Francisco, was in first place with 29.66 percent of the vote.

Li, the advocacy director for the San Francisco Bicycle Coalition, was pleased with the early returns at her Election Night party at Pop's Bar.

"This has been a crazy experience as a first time candidate and a queer, Asian-American woman in this very public sphere. At the end of the day this comes down to transportation and mobility for Bay Area residents," Li told the Bay Area Reporter at the party. "These races today are about San Francisco as we want it to be. I would be proud to be part of the future we want to build together, a future that is more inclusive."

The District 8 seat became open when the current director, Nick Josefowitz, opted not to seek re-election, running instead for District 2 supervisor, where he came up short against incumbent Catherine Stefani.

Li was in a crowded field.

Wow. I'm so overwhelmed by the love & support people have given me over the past four months to get to be able to say these words today: I'm honored and excited to be the BART Director representing District 8. pic.twitter.com/CtG7M7vShu

Li has a background in transportation and transit policy, with a focus on funding. Her campaign platform included shoring up BART's core system, allocating resources for social workers and other staff to deploy at stations where there are problems with street drug users and homeless people, and improving the system's infrastructure.

Gay BART director Bevan Dufty campaigned heavily for Li and was ecstatic that she won. Li will become the third out member on the board, joining Dufty and lesbian Rebecca Saltzman, who was not up for re-election this year.

"In 42 years of electoral politics I've never seen a candidate work harder and be so perfectly suited for the job," Dufty said. "I often say that I came out through lesbians so it means a lot to help elect the first queer woman to hold office in San Francisco in over 10 years. Lots of people are going to be learning who Janice Li is," Dufty said.

Other races
BART board races were also held in other parts of the Bay Area. Like the San Francisco race, candidates ran on improving the agency's public safety practices and its decades-old infrastructure.

"THANK YOU to my campaign team, volunteers, and 24,782 supporting voters for a nearly 56-percent win. Now I am back working for you!" Raburn wrote on Twitter Wednesday morning.

Raburn has worked on an additional parking structure at the Fruitvale BART station and increasing bicycle and pedestrian safety near BART stations.

Cummings, a retired Naval officer specializing in logistics, ran his campaign on creating a safer BART, cleaning up stations, increasing parking for cars and bikes, and bringing transparency to the transit agency.

There was an open seat in District 6, which includes Fremont, Hayward, Newark, Union City, and parts of unincorporated Alameda County. Civil engineer Liz Ames won with 56.61 percent of the vote, while former Fremont City Councilwoman Anu Natarajan trailed with 42.51 percent.

In District 2, newcomer Mark Foley won an upset victory over incumbent Joel Keller, receiving 62.36 percent of the vote. Keller, who has served on the BART board for more than 20 years, garnered 37.64 percent of the vote. Foley is a systems analyst for the East Bay Municipal Utility District.