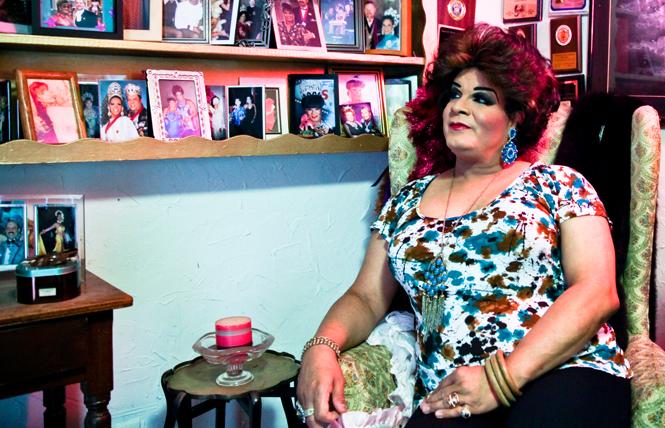 Fredy Miranda, a.k.a. Alexis Miranda, looked at photos that adorn a room in her home, which he will vacate after a legal settlement. Photo: Kelly Sullivan

LGBT tenants in San Francisco have retracted claims that their landlords discriminated against them as part of a settlement reached last week in an ongoing eviction battle.

The tenants of 1779-1781 15th Street — three drag queens, a gay man, and a straight woman — sued their landlords, married couple Leslie Wan and Brian Keller, in October 2017 after being served an Ellis Act eviction notice.

Under California law, the Ellis Act allows landlords to evict residential tenants if the landlords are going "out of the rental business."

Under terms of the settlement, Wan and Keller will pay approximately $135,000 to be split among the five tenants and gives them about seven more months to find a place to live. The property owners were initially offering $50,000 as compensation for the tenants' eviction and an earlier move-out date.

In the settlement, which was reached Friday, November 2, the tenants also agreed to retract all of their discrimination claims made against Wan and Keller, who have continuously denied the allegations.

Three of the tenants are drag queens: Richard Padilla, aka Renita Valdez; William Carmichael, aka Lucille Carmichael; and Fredy Miranda, aka Alexis Miranda. The other two plaintiffs are Donald Branchflower, aka Logos Branchflower and Jennifer Emperador, a straight woman who is Padilla's niece.

Raquel Fox is one of the tenants' attorneys with the Tenderloin Housing Clinic.

"We initially had a firm belief that this was a discriminatory eviction designed to get rid of the drag queens from the house," Fox said. "But after conducting discovery we were convinced that discrimination was not the motivating factor."

She said she believes that Wan and Keller have a genuine desire to turn the three-apartment home into one single-family unit. The property owners have two small children, and Wan now has her parents living in the unit to help with child care, according to Fox.

"All the pieces came into play. They are not doing this to discriminate but to be able to have a place where their parents can be and have more space," Fox said, adding that Wan's deposition was very convincing and mentioned her close relationship with her transgender cousin.

"Leslie and Brian are pleased that the parties could resolve the matter now and wish the tenants well in the future," said the couple's attorney, Andrew Zacks. "They are particularly gratified that the tenants acknowledge they never engaged in discrimination."

Fox said the tenants are "happy" and "relieved" about the settlement. Miranda spoke with the B.A.R. Tuesday and said he feels the settlement is "justifiable" and will enable him to move out with enough time to find another place to live. As far as the discrimination claims, Miranda said, "It wasn't blatant, but it was obvious it was there, but it was resolved to our satisfaction."

He continued. "We were not out for blood and money, we wanted our justice and rights as anyone else would."

As previously reported by the B.A.R., the initial lawsuit filed by the tenants alleged they had faced unfair treatment because of the "disgust and disapproval of [the] plaintiffs ... because of their sexual orientation, sexual expression, and practice of dressing in drag."

Among other unfair treatment the suit alleged was illegal entry by the landlords into the tenants' homes. Padilla previously told the B.A.R. that the landlords threw out, without permission, his drag clothes from a communal storage space. Miranda previously said Wan threw out his barbecue, table with four chairs, and umbrella from the backyard.

One particular issue that was previously emphasized by Padilla was when Wan allegedly shunned her young son's eyes and told him not to look when Padilla was in drag. Although Padilla recently told the B.A.R. he was satisfied with the settlement, he still believes Wan was discriminating against him, but was not prepared to go to trial, which he said could have lasted years.

"They didn't say any names to us like 'gay' or 'faggot' it was just the appearance of her looking at us in the wrong way. When you're in that situation you don't know what to feel," Padilla said.

Padilla plans to move in with his brother in Hayward and said the other tenants are doing well. Miranda, the manager of DivasSF, the city's only transgender bar, is looking for a place to live and said it has been difficult. Some of his applications for affordable housing have been denied because of the income requirements.

Previous dispute
The tenant-landlord dispute had been ongoing for more than two years. Wan and Keller bought the property for $1.45 million in April 2014. They previously tried to evict Padilla, Branchflower, Carmichael, and Emperador in October 2014 on the basis of an owner move-in, which allows a landlord to evict a tenant if the landlord plans to move into the property.

Update: 11/09/18: This article has been updated to correctly identify William Carmichael, aka Lucille Carmichael, as being a drag queen.