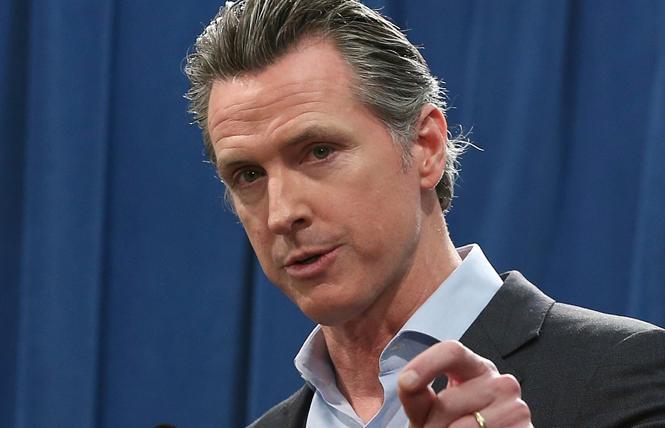 The first LGBTQ rights bill to pass the Legislature this year has been sent to Governor Gavin Newsom's desk. Photo: Courtesy AP

The first LGBTQ rights legislation to be passed by the state Legislature this year now awaits signage by California Governor Gavin Newsom. He has until early July to sign it into law or veto the bill.

Assembly Bill 439, authored by Assemblywoman Rebecca Bauer-Kahan (D-Orinda), would allow for the option of nonbinary as the gender identity on death certificates. It is similar to the 2017 legislation Senate Bill 179, authored by lesbian Senate President pro Tempore Toni Atkins (D-San Diego), which authorized people to use nonbinary on their birth certificates, court documents, and driver's licenses.

The first bill focused on LGBTQ rights to pass out of its house of origin this legislative session, when the Assembly voted for it 62-2 on April 19 with 12 members not voting, the Senate approved the bill June 21 on a 32-6 vote with two abstentions. The Assembly voted a second time on the amended bill June 24, passing it with 63 votes and 16 abstentions.

"When nonbinary people pass away, it is important to have their full identity reflected on their death certificate," stated Bauer-Kahan. "Incorrectly assigning a nonbinary person a gender is wrong and disrespectful to their memory."

Gay Assemblyman Evan Low (D-Campbell), the current chair of the Legislative LGBTQ Caucus, hailed the passage of AB 439 as helping to keep California "on the trajectory" of advancing rights for its LGBTQ residents. Low spoke to the Bay Area Reporter about the bill while attending a news conference Monday in San Francisco's LGBTQ Castro district where California Attorney General Rob Bonta announced he is expanding the number of states where most taxpayer-funded state travel is banned to 17 because of five states enacting anti-LGBTQ laws this year.

"When you hear all these anti-trans laws are being passed in these states you wonder is this the trend? Thankfully, here at home, California continues to be on the trajectory to be as inclusive as possible," said Low. "Unfortunately, other states are trying to be as exclusive as possible."

Equality California executive director-designate Tony Hoang, who also attended the press conference, praised Bauer-Kahan for carrying the bill to passage and showing that the Golden State embraces its transgender and nonbinary residents.

"It really continues to show that California leads the way in adopting laws to support transgender, gender-nonconforming, and nonbinary folks," said Hoang, who is slated to succeed Rick Chavez Zbur later this year as the leader of the statewide LGBTQ rights organization.

The Assembly last Thursday also voted a second time to pass Bauer-Kahan's AB 378, which systematically goes through laws related to the offices of the governor, lieutenant governor, attorney general, secretary of state, state controller, treasurer, insurance commissioner, and board of equalization to make all references to the gender of the officer gender neutral.

Currently, most parts of the state code refer to these constitutional office holders as only "he" or "him."

"I applaud the Legislature for voting overwhelmingly to approve AB 378 today," stated Lieutenant Governor Eleni Kounalakis, who co-sponsored the bill. "As the first woman elected lieutenant governor while our laws still refer to the lieutenant governor as 'he' and 'him,' I am living proof that these changes are long overdue. Making our code gender neutral will pave the way for all Californians to know that they can lead here, regardless of their gender identity."

Bauer-Kahan noted that not only does the Golden State have its first female elected lieutenant governor but also has women serving in the statewide elected positions of controller, treasurer, and secretary of state.

"Our laws do not reflect that. California's code still refers to the lieutenant governor as a 'he' when that is clearly not the case," she stated. "This bill updates this language to accurately reflect that gender has no bearing on the office you can hold."

The governor's press office told the B.A.R. in response to a request for comment that it "does not comment on pending legislation. When a bill reaches the governor's desk it will be evaluated on its merits." Newsom has 12 days to make a decision once the pair of bills officially land on his desk.

"We remain hopeful he will sign quickly. Because these passed outside of the end of session window he has 12 days to act," Bauer-Kahan's Chief of Staff Jordan Curley told the B.A.R. Monday, June 28.

The Assemblywoman's AB 378 is similar to Senate Bill 272 authored by gay state Senator John Laird (D- Santa Cruz), which Bauer-Kahan and Low are co-authoring. It will update "archaic gender-specific pronouns" used in the state's vehicle code to refer to the California Highway Patrol commissioner, now led by a woman, as well as throughout the state's insurance code.

It is making its way through the Assembly, one of 10 LGBTQ bills lawmakers and community groups hope will also be sent to Newsom for his signage in the coming weeks. Also on the list is a bill aimed at protecting the privacy rights of people receiving sensitive health care services, such as gender-affirming care. AB 1184 is one of two trans rights bills Assemblyman David Chiu (D-San Francisco) is carrying this year.

His AB 245 would prohibit public universities from deadnaming trans and nonbinary students on their diplomas and academic records. It is making its way through the Senate.

AB 218, which is aimed at allowing Californians to update their marriage certificates and the birth certificates of their children to accurately reflect their legal name and gender, is also awaiting votes in the Senate. Gay freshman Assemblyman Chris Ward (D-San Diego) revived the legislation after Governor Gavin Newsom vetoed similar legislation last fall due to concerns it would inadvertently out transgender and nonbinary individuals.

Other bills
The Senate is also taking up Low's AB 1084, which would require retailers with 500 or more employees to remove signs for gender in toy and childcare sections, or require the retailers to provide a gender-neutral retail section for the items. In a compromise to move the bill forward, Low and co-author Assemblywoman Cristina Garcia (D-Bell Gardens) agreed to not include children's clothing sections in the bill.

Another bill wending through the Senate is AB 465 by Assemblyman Adrin Nazarian (D-Van Nuys), which would require that professional fiduciaries receive LGBTQ+ cultural competency and sensitivity training during their education and licensing process. Private professional fiduciaries provide critical services to older adults and people with disabilities, from managing their clients' daily care, housing, and medical needs to ensuring their bills are paid and managing their investments.

Also waiting to be taken up by the senators is AB 1041, authored by Assemblywoman Buffy Wicks (D-Oakland), that would expand the definition of "family member" for purposes of family and sick leave to allow covered workers to take time off to care for someone designated by the employee at the time of the request. It takes into account LGBTQ people's chosen family members who aren't biologically or legally related and other household units that don't abide by a "nuclear family" model so that such individuals can get time off to provide health care and other assistance to their loved ones.

Several other LGBTQ rights bills are awaiting votes in the Assembly. SB 357, the Safer Streets for All Act co-authored by gay state Senator Scott Wiener (D-San Francisco) and Assemblyman Ash Kalra (D-San Jose), would repeal California Penal Code Section 653.22, the law that criminalizes loitering for the intent to engage in sex work. It would also allow those convicted of loitering with the intent to commit prostitution, particularly the Black women and transgender individuals often targeted under the law, to seal their records.

Senator Lena A. Gonzalez's (D-Long Beach) SB 283, aimed at strengthening the Equal Insurance HIV Act of 2020, is waiting for a vote by the full Assembly having passed out of its insurance committee June 24 on a 14-0 vote. It would impose a prohibition as of January 1, 2023 on a life or disability insurance insurer from considering an applicant's occupation in determining whether to require an HIV test and clarifies that limiting benefits payable for a loss caused or contributed to by HIV is allowed if it was part of the original underwriting risk. It also clarifies that the misdemeanor for willful, negligent, or malicious disclosure of HIV test results to a third party is punishable by imprisonment for a period not to exceed 364 days.

Also to be taken up by the Assembly is Laird's SB 258, which aims to include older people with HIV as part of the population of "greatest social need" when it comes to programs and services administered by the California Department of Aging.

UPDATED 6/28/2021 with a response from Governor Newsom's press office.