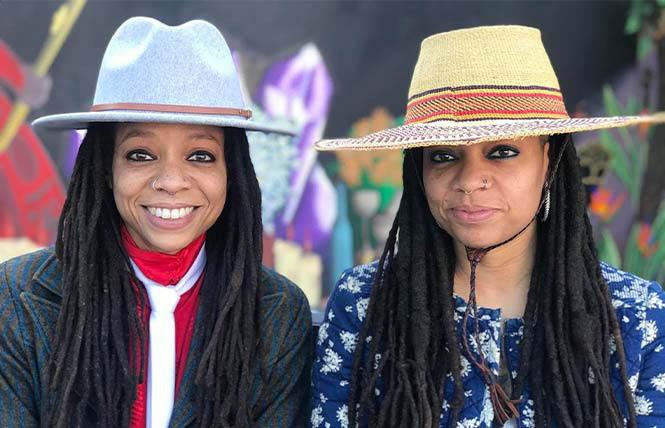 "We are here for the tough conversations," said Melorra Green, speaking for herself and her twin sister, Melonie Green. On this week's Out in the Bay, the sisters talk about their vision for a Castro neighborhood more embracing of queer people of color, about art, "Black Joy," San Francisco Pride 2021, and their coming out experience.

The Greens — San Francisco Pride 2021's community grand marshals — also co-direct the city's African American Art & Culture Complex, which they reconfigured during COVID-19 to capitalize on the culture center's outdoor spaces. They commissioned more than 30 pieces of new art by Black artists that can be easily and freely viewed at the AAACC's Open Air Gallery, 762 Fulton Street in the city's Fillmore district.

The twins share the opinion that the city's world-famous Castro district, seen as a place of freedom for LGBTQ people, should be "a safe space ... for Black and Brown folks, not only for history and legacy, but just to have a drink and not be gawked at, or be someone's fetish toy for the night." They say getting there will include sometimes "messy, two-faced" conversations that must be held "with people who you know are problematic."

Originally from Memphis, and born just a minute apart, the twins came to the Bay Area to study film, "not to come out, or get free" of their Tennessee upbringing. They "really grew up in the church," Melorra Green said, and "wanted to be 'good' people."

They had high school boyfriends, but "it didn't resonate" and Melorra Green would think, "You're actually really cute. But baby, can we just watch TV?" After being in San Francisco for a while, while living with their aunt, they began to discover their true selves at about the same time.

One day, lying back-to-back in their aunt's room, each said they had something to tell the other. Melonie Green said she went first. "I took the punk route. I was like, 'I think I'm bi.'"

"And I was like, 'Well I'm gay.' 'Cause I didn't want to leave any mystery," said Melorra Green. "It couldn't have happened any better."

The Greens have been making their mark on the Bay Area LGBTQ and art scenes ever since. They have produced more than 80 exhibitions and 100 public events, including "The Black Woman is God" exhibition at the African American Art & Culture Complex and SOMArts Cultural Center, and they helped create the 2020 street mural paintings of Black Lives Matter and Trans Lives Matter extending from Civic Center to the Castro.

Hear more from Melonie and Melorra Green, in their own words and voices, on this week's Out in the Bay — Queer Radio from SF. The program airs 9:30 a.m. Saturday, June 26, on KSFP, 102.5 FM in SF only, and is available anytime, anywhere on Out in the Bay's website. Out in the Bay also airs at 10 p.m. Tuesdays on KALW, 91.7 FM throughout the Bay Area.

Eric Jansen is founding host of Out in the Bay - Queer Radio from San Francisco. Hear current and past shows at https://www.outinthebay.org/

Out in the Bay: Steven Rowley's 'The Guncle' heals grief with humor
Sign up!