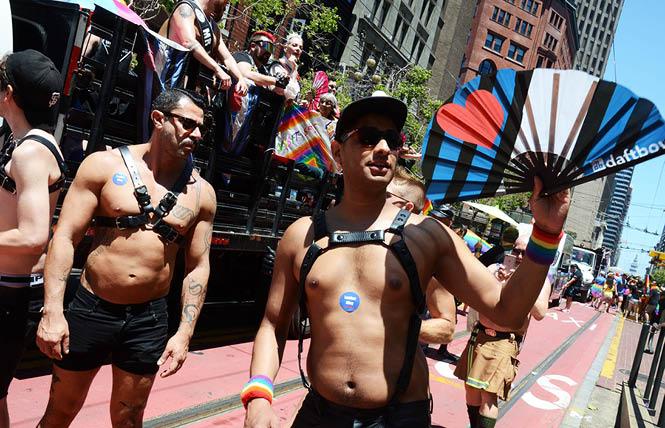 Recently, the topic of kink- and fetish-related exhibits at Pride parades has become a flashpoint within the culture war. Proponents of kink at Pride argue that the marches came out of a place of rejecting straight society's conventions on what is an "allowed" expression of sexuality, and that many of the organizers of early Pride events were also active in the kink and leather communities. Those arguing against the inclusion of kink at Pride often argue that it may alienate straight allies and make them feel uncomfortable, as well as make such events unsafe for children.

To this, I say that I often feel uncomfortable when displays of straight sexuality are shoved down my throat, but I don't feel the need to argue against playing "WAP" on the radio or banning the "Fifty Shades" trilogy from being sold in bookstores. If straight allies are made to feel uncomfortable by seeing kink at Pride, they are more than welcome to examine their own biases that have convinced them that exhibiting queer sexuality is inherently more predatory than the numerous displays of straight sexuality in our culture today. Kink has been an essential part of early queer, and especially gay, culture and, as such, it has much more of a place at Pride events than corporate floats or cops. Pride should not be a zoo for straight people to gawk at "the gays," and it should not cater to people who are not even a part of our community.

Some have also argued that seeing flagrant displays of queer sexuality at Pride parades could turn prospective allies away from our cause. However, if seeing two men in gimp outfits kissing makes you a homophobe, you were never not homophobic. So-called allies need to learn that if your acceptance of a group hinges on them behaving in ways that you agree with, you were never affirming of said group to begin with.

And finally, I would like to address the argument that kink at Pride somehow makes these events unsafe for children. I have seen many straight allies complain that they feel uncomfortable with their children at Pride events due to the presence of kink. But complaining that Pride events can be alienating to children because of this is like saying that bars can be alienating to children, so we should ban alcohol from bars. Pride isn't a come one, come all carnival — it is a figurative riot, — celebrating the actual Stonewall rebellion of 1969 — a celebration of queerness in all of its forms, including those that are not "family-friendly." Perhaps if the straight allies who feel the need to dictate what queer people can and cannot do at their own festivities feel awkward bringing their children to Pride events, they should teach their children the values of tolerance and acceptance daily instead of bringing them to queer events once a year and hoping that staring at us will somehow teach their children that we are human beings worthy of respect and dignity.

Historically, straight society has shunned us, imprisoned us for who we are, and beat us senselessly in the streets, so we made our own cultural constructs separate from it. And now that queerness has managed to attain the bare minimum of cultural cachet, the same people that, 52 years ago, would have been cheering as we were beat with batons and assaulted with fire hoses, now feel that they have the right to dictate what we as queer people can and cannot do at our own events. Mainstream gay culture has already been sanitized enough for a general audience — many Pride floats nowadays include corporate advertisements more than anything coming close to the Stonewall riots. The fact that to some straight allies Pride floats from banks that do business with regimes that execute queer people are fine, but bears and others wearing leather is a step too far is a prime example of why we should ignore the voices calling for the removal of kink at Pride and continue to welcome one of the last bastions of early LGBTQ culture at our celebrations of queerness.

Andrew Kelly is an aspiring journalist and activist. He will be attending San Francisco State University in the fall.

Guest Opinion: You can be open about addiction
Sign up!