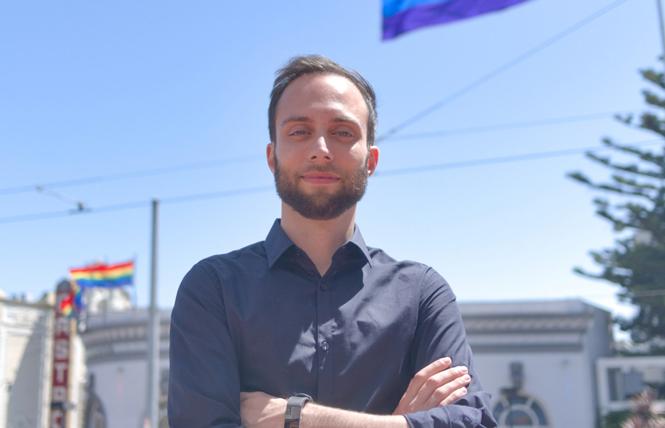 Austin Hunter, Mayor London Breed's nominee, was approved by the Board of Supervisors for a seat on the San Francisco Commission on the Environment. Photo: Courtesy Mayor's Office

The San Francisco Board of Supervisors recently approved Mayor London Breed's nomination of a gay man for a seat on the city's environmental commission.

Austin Hunter, a longtime member of the Alice B. Toklas LGBTQ Democratic Club, told the Bay Area Reporter that he's eager to begin work on the panel, particularly around the city's climate action plan, or CAP. And he said that the plan, which shapes how the city thinks about climate change through 2050, focuses on equity and access issues on a range of programs, including affordable housing.

"What affordable housing looks like is one of the things CAP calls for," Hunter, 28, said in a June 22 phone interview.

Breed nominated Hunter May 27, and the supervisors approved his nomination to the Commission on the Environment June 15. According to the mayor's office Breed has now appointed or reappointed over 48 LGBTQ commissioners, making up 15% of all her appointments to city oversight bodies, since her inauguration in 2018.

Hunter's term ends in March 2023, according to the Department of the Environment's website.

"Tackling the threat of climate change is essential for protecting the future of our city and our entire planet," he said in a statement from the mayor's office. "I am looking forward to being part of the city's ongoing work to reduce emissions and make our city more resilient and healthier for all."

For example, Hunter stated that the effects of climate change are felt most by vulnerable residents. He added that he's committed to "upholding the mayor's focus on equity and ensuring our climate actions support vulnerable residents and communities across San Francisco."

"For 100% renewable energy, [CAP] makes sure that subsidies go to people who need them," he said in the interview.

Hunter currently serves on the San Francisco League of Conservation Voters board. That group works on promoting environmental protection through participation in the local political system. Previous to being appointed to his new position, Hunter served on the San Francisco Public Utilities Commission's advisory committee.

He said that he originally applied to the mayor's office to serve on a commission when he was selected for the SFPUC panel. When an opening on the environmental commission became available, he applied for that.

In his professional capacity, Hunter said that he is employed at Facebook, where he works in innovation and ethics review for products, including their impact on human rights.

His interest in human rights will also serve him as he begins his tenure on the commission, he noted.

"If we're supposed to implement CAP, I want to make sure we think of the environment from a human rights perspective," he said. "That's important in planning for climate change."

Hunter also said that it's important that the Department on the Environment is adequately funded by the city. According to the San Francisco Department of the Environment's draft budget plan, the agency, which does not receive money from the general fund, proposed an operating budget of about $25 million for Fiscal Year 2021-22. Most of the department's revenue is generated from impound fees, according to the draft budget figures.

Hunter said that he expects to attend his first meeting as a commissioner in late July. He met this week with Department of the Environment director Debbie Raphael.

"It's very exciting," he said of his appointment.

Hunter is an alumni of the Equality California Institute's Leadership Academy. He holds a master's degree in public policy from King's College of London, a bachelor's degree in international relations and political science from San Francisco State University, and an associate degree in social behavioral sciences. He currently attends Golden Gate University of Law, where he has been awarded a full scholarship.

Breed nominates out man for preservation panel
Sign up!