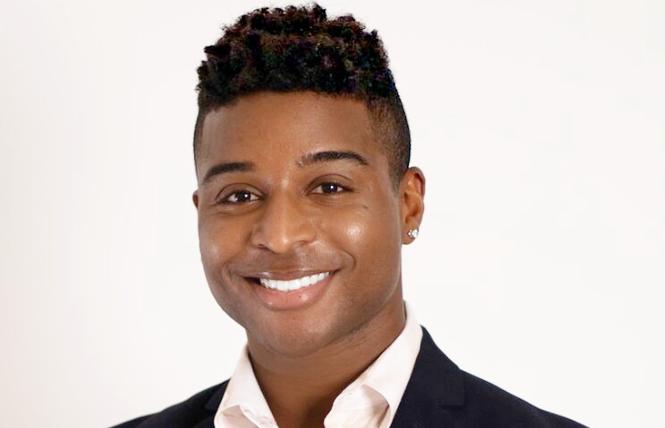 A gay Black man seeks to "slash gender norms" in the perfume industry with his fragrance brand as he works to expand online sales.

Nick Yeast II founded the Nick Ricardo Collection — a gender-neutral fragrance brand that also seeks to "elevate the narrative of the POC, nonbinary, transgender, and gender-nonconforming individual," he said.

Speaking to the Bay Area Reporter, the 28-year-old flight attendant said that, for years, he never thought he'd go into making fragrances.

"Fragrances have always been a mood-enhancer for me," said Yeast, who has a place with his husband in San Francisco. "I'd get compliments for the fragrances that I wore in high school, and that made me feel good, but I never thought I'd get into fragrances until I went to South Korea on a solo trip."

It was there that the budding scent maker took a fragrance-making class in October 2017.

"I fell in love with the ladies in the shop," Yeast said. "I made my first bottle at the workshop and wore that fragrance; [and] people complimented me."

For much of the next year, Yeast then undertook learning the art of perfumery.

"I was so new to all this," Yeast said. "If you don't really know, you get the right people in your circle who do know. I had no idea there was such a fragrance community out there."

As he got into the "nitty-gritty" of developing the right scents for his brand, Yeast learned that "some people make them at home, some studied and some learned the game like I did."

"Eventually we ended up in the lab with the experts," Yeast said.

In 2019, the Nick Ricardo Collection was finally released to the public.

"We were in a couple boutiques. I did a launch party in New York and I was at the Taylor Jay Collection in Oakland," Yeast said. "With the pandemic, and more and more business heading to e-commerce, it made sense to move online because we work with online retailers as well."

Since the move to sell exclusively online, Yeast said business has not necessarily been better, "but it's a good, steady presence we have in the fragrance community."

There are four fragrances in the collection as of now: Onyx, Turbulent, Desire, and Mention. Each costs $64 for a 50ML/1.7oz bottle, and a $1 from every online purchase is donated to the Transgender, Gender Variant, Intersex Justice Project.

"On our website we have our Be You sample collection — a 'try before you buy' type thing," Yeast said. "It comes with a 15% off discount when you get samples."

The collection is named after his father, Nick Ricardo Yeast I, who he described as "a baby boomer parent who's hella supportive of their kid."

The younger Yeast said that he came out to his father as a teenager in Kentucky and was supported.

"The Yeast family in the sports world is a household name," the younger Yeast said. "I definitely didn't beat to that drum."

The elder Yeast told the B.A.R. that he played college football for Eastern Kentucky University from 1979 to 1982, at the same time the team won championships. He said he shares knowledge of his son's fragrances "everywhere I go and with everyone," and that he wears them frequently.

"I like the Turbulent," the elder Yeast said. "But I like every single one of them. I use all of them. I'm happy and I get good comments on all of them."

The elder Yeast said he's very proud of his son.

"I'm just proud of Nick," he said. "He's a hardworking young man. He got his goal set and now he's doing his thing. Daddy ain't got no complaints at all. As they say back here, I'm a happy camper."

The younger Yeast said that he normally lives in San Francisco but, with the onset of the COVID-19 pandemic, he went back to Kentucky to help take care of his parents. He said that he is going to come back "now that California is a bit more open."

Working Solutions provides financial services, such as lending and coaching to people in marginalized communities, such as the LGBTQ community, who might have a tougher time accessing the needed capital to start a business.

Sara Razavi, a lesbian who is the CEO of Working Solutions, told the B.A.R. that Yeast spoke to the team there to find out about marketing and sales.

"We're a nonprofit financial institution serving the nine Bay Area counties — people left out of the mainstream," Razavi said. "Nick came to us looking for some startup capital and he sits in the demographic that we seek to be serving, so it made a lot of sense for us to support Nick."

Working Solutions hooked Yeast up with Small Business Administration funds in the amount of $6,500.

Wells Fargo Bank works with Working Solutions and made a $500,000 investment in the nonprofit.

"It's an honor to serve business owners like Nick through our relationship with impactful organizations such as Working Solutions," said Judith Goldkrand, a national women and Asian segments leader with Wells Fargo. "Wells Fargo has a longstanding history of supporting the LGBTQ+ community. We have always felt that we stand stronger together."

Yeast said he hopes that having fragrances, as opposed to cologne on the one hand or perfume on the other, will help "break the barriers down with gender norms."

"We have perfume and we have cologne, but it should all be about just being you," Yeast said. "Our whole life we have people telling us who we are supposed to be, and then we have to find out who we are. At the end of the day, we're definitely more of a movement than a brand."