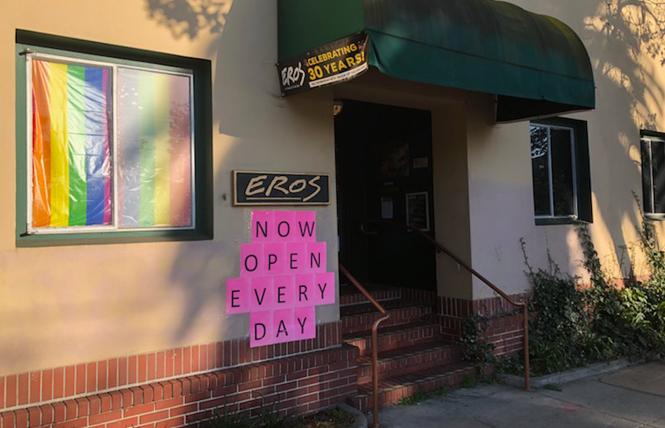 Patrons showing up to take a dip in the hot tub or sweat in the saunas of Steamworks Baths in Berkeley last weekend may have seen something they haven't witnessed in a while — long lines of men stretching out the door.

"I know for sure on Thursday [June 17] we had one for over 12 hours," Curtis Jensen, Steamworks' marketing and graphics coordinator, told the Bay Area Reporter June 21. "We had a really good weekend."

Steamworks and San Francisco's Eros are the last gay sex venues that were left to reopen when California Governor Gavin Newsom gave the all-clear last week; San Francisco's Blow Buddies and San Jose's the Watergarden were forced to shutter permanently due to the COVID-19 pandemic.

But something that gay bathhouses and sex clubs offer that apps like Grindr lack is the in-person experience, Jensen said, a difference that mirrors how much of society has lived for the past year and their reentry into physical interaction now.

"Apps may seem convenient, but they're not terribly human," Jensen said. "There's nothing like a real human being, face-to-face."

Jensen said he is happy that patrons haven't permanently changed their habits during Steamworks' temporary closure due to the lockdown.

"I'm excited that our men were excited to have us back," Jensen said. "We were a little nervous because we'd been closed for a year and a half, but we are relieved people are coming back."

The bathhouse will only be open Thursdays at 8 a.m. through Mondays at 8 a.m.; a lack of sufficient staff is preventing it from returning to its previous 24/7/365 schedule. Because of that, the corporate office is also working part-time, Jensen said.

Steamworks will be asking for proof of vaccination on a patron's first visit back as a requirement for receiving a membership. The normal membership fee is being waived "for the time being," Jensen said, assuring that the bathhouse will not be keeping a record of anyone's vaccination information once a patron obtains the membership for which it is required.

"You can bring a card, a photo of it on the phone, or a photocopy," Jensen said.

Other prices have not gone up: a locker is $18 until Friday night, when the price increases to $23. Similarly, a standard room is $31 until the same time, when it rises to $36.

SF sex club fully reopened too
In San Francisco, Market Street's Eros has been open since May 20, as the B.A.R. reported earlier this month. Co-owner Ken Rowe told the B.A.R. June 21 that the restrictions that remained then — such as a mask requirement in the play space, and a 25% capacity limit — went by the wayside on June 16, one day after the great California reopening.

"We are at full capacity and no longer limit how many guests are in here," Rowe said. "The steamroom and sauna have no limits, and one of our rooms that we closed to work on while we got up and running reopened, too."

Eros used to allow people to use a negative COVID-19 test result within the last 72 hours to enter. Now, Rowe said it has aligned its policy with its sister business across the bay.

"If you show us your vaccination records — on your phone or digitally — we give you a free, six-month membership," Rowe said.

Eros, too, is operating for fewer hours than it used to.

"We are just open until 9 p.m., but this weekend we'll be open till 10 p.m.," Rowe said, referencing Pride weekend. "We hope after the Fourth of July to be closer to our old hours."
Rowe said that the reason for this is because "BART closes at 9 p.m. and we have to find staff in the city [of San Francisco] that can work later."

But Eros has expanded from Wednesday-Sunday to, now, being open all seven days.

"There was also a weird period where CAL-OSHA [the state Division of Occupational Safety and Health] said staff had to wear masks even if fully vaccinated," Rowe said. "That was rescinded Thursday [June 17]."

Rowe said that last weekend was not as busy as the one preceding it (which also immediately preceded the June 15 reopening date that allowed Steamworks to come back).